I HATES ME SOME G.I. JOE, BUT I LOVES ME THE BARONESS

The live action G.I. JOE: THE RISE OF COBRA just opened over the past weekend and I have about as much interest in seeing it as I have of contracting genital warts. I've been apathetic at best to the whole '80's G.I. Joe animated TV series phenomenon since the second it happened and find the whole enterprise a total piece of shit whose undying popularity among now adult fans perplexing. The TV show was nothing more than a half hour commercial for the toy line and featured military action and violence wherein nobody got killed, the action figures were not all that good, and although Larry Hama did some good writing for the comic book version — of which I read only a handful of issues — I simply could not be arsed enough to care about any of it. Any of it, that is, excepting the Baroness.

Cobra operative the Baroness, as depicted by Adam Hughes, the king of the "one-handed" comic book artists..
I'm still kind of amazed that the creators of G.I. JOE ('80's version) got away with the Baroness in what was clearly kiddie entertainment, especially at the time, because visually she's a total bad-girl spank fantasy. She's a dark-haired femme fatale type, dressed from head to toe in skintight black leather, she's seldom seen not toting some kind of heavy duty ordnance, and to top it all off, she rocks a pair of "naughty librarian" glasses like the highest-paid dominatrix at Madame Olga's House of Discipline.

The Baroness, as seen in the comics.
Fuck Trinity — and I'm sure many of you out there would love to — ; the Baroness rocks the black fetishwear with a great sense of class and no-nonsense sass worthy of her sobriquet, and I would love to see her chuck the world-conquering biz in favor of a much more lucrative career doling out punishment to high-powered heads of state, members of royal families, and beloved children's show hosts, all while primly adorned in her second skin of leather with a Cobra emblem obscuring what would certainly be an impressive display of evil cleavage. And talk about unexpected happenstances, in recent years geek-gals have been showing up at comics conventions decked out in full-on Baroness outfits, something that makes me smile (and occasionally leer, if truth be told) because maybe now we'll get a universally-rocked women's costume that will dethrone the favorite femme-geek outfit of the past god-knows-how-long, namely tired-assed "Slave Girl Princess Leia." (An outfit that wasn't all that to begin with, but it was officially over FRIENDS made it a punchline.) 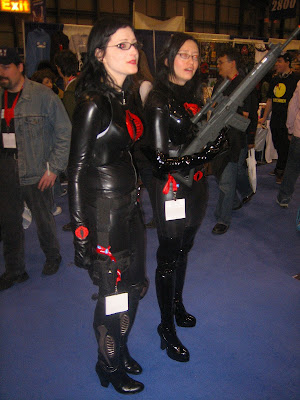 Two ladies representing for Cobra at the 2009 NY Comicon.
So now the G.I. JOE movie has dropped into theaters like a particularly redolent stink bomb, and the lucky young lads who are willing to shell out their allowance money get the manhood-stirring image of Sienna Miller in the Baroness' signature leathers. (Although it would have been nice to let her keep the red Cobra emblem that contrasted so well against her ebony bosom; this movie's based on a line of toys, a cartoon show and a goddamned comic book, so who gives a damn if it looks "realistic?")

Sienna Miller, lending flesh to the fantasy.
I have no idea who the fuck Sienna Miller is and genuinely do not care, but when this summer blockbuster-cum-feature-length toy commercial hits cable or when one of my much-younger co-workers gets their hands on the DVD, I will eagerly check it out solely to see the bespectacled, beleathered and bodacious Baroness strut her stuff and fuel thoughts I'd figured I'd left behind when a nice young lady gave me my very first taste of "the Other" many moons ago. Apparently there are just some things one never outgrows...
Posted by Bunche (pop culture ronin) at Wednesday, August 12, 2009

One of the hottest characters ever to hit the pages of comics, the screen in a cartoon, and now in live action.

I think she looks pretty clas as the Baroness, but really, would it have killed them to just have the Cobra logo on her? Such a great logo design, completely gone to waste. Now, it just looks like a generic cat-suit.

I always thought the Cobra logo looked like the ol' "Ax Wound", if you know what I mean...

I've hated GI Joe with an unbridled passion ever since the redesign in the early 80's.

First of all, your talk of fetish is nothing short of musical poetry. You have a way with words, my good man.

Secondly, I'm pretty "meh" on the whole G.I. Joe thing. As you know, I only used Joe as my Barbie's bitch to do useful things like change the flat tire in my pink Corvette and stow the surfboards in the Jeep.

And yes, by all that's holy, there needs to be a costume that dethrones the Slave Leia.

So which is sexier? Covered up completely but tight or the nearly naked?