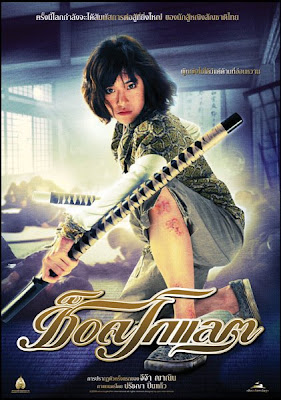 After hearing nothing but great buzz on this Thai ass-whuppin' opus from the makers of 2003's ONG-BAK, I checked out the DVD and was somewhat underwhelmed.

CHOCOLATE is best described as a "gimmick" martial arts film that's kind of a chopsocky RAIN MAN thanks to its protagonist being an austistic girl whose savant gift is in the field of martial arts rather than numbers and calculation. Young Zen (Yanin "Jeeja" Vismistananda) has the ability to observe, absorb and apply hardcore ass-whuppery techniques, a skill that comes in quite handy when she embarks on a quest to collect monies owed to her gangster mother who is dying from cancer and needs the cash to pay for her medical bills, and the flimsy narrative is nothing more than an excuse to show off the star's impressive handling of the clever and bone-crushing choreography. I gave up caring about the actual plot fairly early into the film and just wanted to witness Vismistananda's precise demolition of the list of deadbeats, but even though I stuck with the movie for the fights I soon felt wearied by the mechanical nature of the proceedings. The tear-jerker element of the narrative failed to draw me in and once the fights went from the repetitive to the ridiculous — particularly a finale that owes much to Jackie Chan's PROJECT A (1983) — I pretty much lost interest altogether. Vismistananda's work here cannot be faulted, however, and shines despite the lackluster script. She's apparently experienced in Tae Kwon Do (believe me, it shows) and trained for two solid years for this film before embarking on its two-year shoot, so we're talking four years of intensive effort on her part, but I just wish she'd had a script worthy of her awesomeness.

CHOCOLATE is definitely worth a look for the fights, but that's all. And, no, I have no idea how the film's title has anything to do with anything in the story. Maybe that's because the DVD I saw had cuts made to it that I know flesh out elements of the story in the original Thai version; there's supposed to be some business about Zen growing up next to a Muay Thai training school as well as learning to kick ass by watching kung fu movies and playing martial arts video games, but that was excised from the version I saw, so maybe a sequence explaining the title got lost as well.
Posted by Bunche (pop culture ronin) at Saturday, March 07, 2009

What? They cut out the training school stuff? That makes no sense - it wasn't very long and it's not like this is an epic-length film to begin with. It doesn't add a lot to the plot but it's kind of neat to watch how she learns to start kicking things. I think the title just comes from the fact that she likes chocolate (she collects/consumes lots of little M&M type candies early in the movie).

I agree that the plot is just an excuse to string together a bunch of fights but that's true of ONG BAK as well. Overall I liked the fights in CHOCOLATE better - they were more inventive and there weren't as many "oh look that guy's wearing a padded wig, guess it's time for a flying elbow-smash to the head" moments.