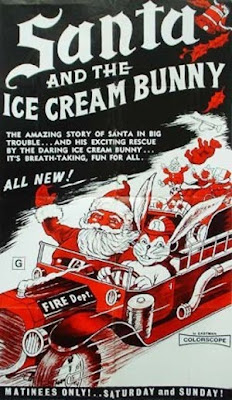 Other than getting my very own copy of THE MAKING OF THE EMPIRE STRIKES BACK (Come on, Santa! Ohpleaseohpleaseohpleaseohpleaseohplase), the thing I'm most looking forward to this Chistmas is seeing the infamous 1972 seasonal kiddie flick SANTA AND THE ICE CREAM BUNNY, with running commentary by the RiffTrax guys (Mike, Bill and Kevin from the post-Joel years of MYSTERY SCIENCE THEATER 3000). I've heard about its zero-budget incredibleness for ages and now I get my chance. I mean, how could I not want to see this on Christmas Eve, cushioned with a few beers?


Am I wrong, or is Thumbelina kinda hot, in a Susan Dey/Laurie Partridge kind of way? (God, how I had the hots for her when I was a wee Bunche...) 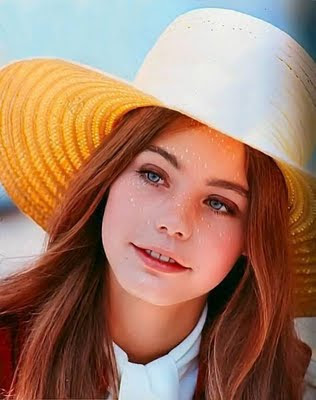 And I love how when Mr. Bird is flying, you can see his wing's shadow against the blank studio wall that's meant to be the sky. And what the fuck are Tom and Huck doing in this film, while an all-kazoo version of "Ol' Man River" plays on the soundtrack?


I've heard numerous reports of how this film is like the kiddie movie equivalent to Chernobyl, but to a guy like me it sounds like a must-see.

The RiffTrax version won't be released unti 12/17 but I wll order my copy on that date at midnight, guaranteeing that it'll be in my hands just before I head home for Christmas. I plan on subjecting my old pal Chris to it on Christmas Eve while my mom is off at midnight mass, but you can read a detailed overview of this lysergic triumph here.
Posted by Bunche (pop culture ronin) at Tuesday, December 14, 2010

Did I hear kazoos playing the tune of "Old Man River" from Showboat?

I think I did.