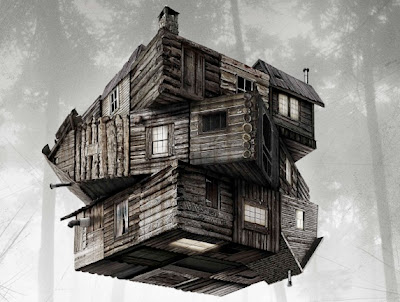 I love horror movies. I really, really do. I've had a passion for them since I was old enough to understand that being scared can be fun, and I enjoy most of the myriad storytelling flavors that the genre has to offer. That is why THE CABIN IN THE WOODS completely blew me away when my dear friend Suzi and her sister, Kris, insisted that I check it out. They'd both seen it in Fresno in April when it opened, and I was dragged to it maybe a month later after Suzi, who knows me better than most people do, swore up and down that I would love it. When I asked her exactly what it was about the film that made it seem so up my alley, Suzi flat-out refused to give me an explanation, which totally piqued my curiosity, and after seeing it I totally understand why she refused to give me any information.

THE CABIN IN THE WOODS is a film whose considerable impact depends on the audience going into it with no knowledge of it's about, or rather all one should be aware of before seeing it is a general understanding of horror movie tropes that have been pretty much carved in stone since the advent of HALLOWEEN (1978) and FRIDAY THE 13th (1980). The narrative very convincingly leads the audience to believe it's going down the "teen slaughterhouse" path for the umpteenth time, and by now we all know the requisite elements for that cinematic ritual. If you've seen almost any film of the FRIDAY THE 13th school — more often than not a lazily-crafted non-narrative that serves to get a number of personality-void teenagers/twenty-somethings to a remote location wherein they are systematically and gorily murdered by some cutlery-wielding psychopath/bogeyman or a summoned force of supernatural malevolence — you know what to expect from THE CABIN IN THE WOODS' setup. You get: 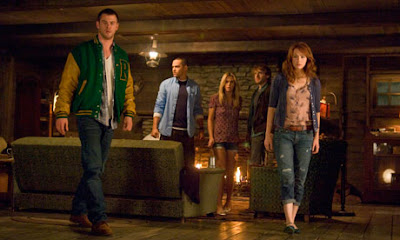 The story's five unlucky college students.
With those cookie cutter elements in place, one would have every right to expect yet another "I could write this while taking a hearty Taco Bell dump" potboiler, but all bets are off when the film is in the capable hands of director/co-writer Drew Goddard and Joss Whedon, writer of a ton of really good shit and creator of the now-legendary BUFFY THE VAMPIRE SLAYER, a TV series that regularly turned the expectations of jaded horror fans upside down. The pair possess a fervently self-proclaimed love of the horror genre and an equally passionate loathing of what the form has become after being dominated too long by brain-dead, character-void forays into "slasher" territory and its more contemporary iteration, the vile realm of "torture porn." THE CABIN IN THE WOODS is both a love letter to horror as a storytelling form and a commentary upon its current sorry state that trots out those familiar tropes and veers them waaaaaay left field of the likes of HALLOWEEN PART XVII.

I would be a complete and total asshole if I revealed exactly what the plot of THE CABIN IN THE WOODS entails, but here's what I can tell you about it without ruining its surprises: The aforementioned college kids head off to the cabin for the weekend and unintentionally revive a family of undead torture-loving rednecks by reading a Latin passage from a diary found in the basement's trove of ominous tchotchkes. But, unbeknownst to them, their every move has been carefully, even ritually orchestrated by what appears to be a crack team of administrators and lab types in some sort of high-tech government base, which leads us to ask exactly why the hell would a bunch of suits and lab-coated eggheads would be setting up the horrible demise of innocents? (NOTE: The base and its staff are the first thing we see in the film, so mentioning them here in no way spoils things.) The answer is quite surprising and will greatly appeal to horror fans who are sick and tired of slashers, torturers, and the other flavors that have usurped the kind of terrors that made the genre a beloved draw in the first place.

Also worth noting is that the script pulls the rug out from under our expectations by giving us protagonists whom we get to know and care about, each of whom is clearly intelligent and they pretty much act like you or I would if stuck in the shitstorm they find themselves thrown headfirst into. What would have been a bunch of uninteresting ciphers in virtually any other formula fright flick of roughly  the past three decades are here given vivid characterizations and the actors who portray them are to be commended.

So what we have with THE CABIN IN THE WOODS is a massive "fuck you" to the lazier, more crass entries that many, myself included, feel have all but irrevocably destroyed the horror film as a forum in which legitimate, story-driven things that go bump in the night have been neglected for too long. No lie, I hereby go on record and state that this film is the theatrical experience I most enjoyed during the past twenty years or so, and it gives me hope for the return of the kinds of horror stories that I have adored since first seeing stuff like KISS OF THE VAMPIRE, NIGHT OF THE LIVING DEAD, and many other pre-FRIDAY THE 13th celluloid nightmares. HIGHEST RECOMMENDATION.
Posted by Bunche (pop culture ronin) at Monday, October 01, 2012