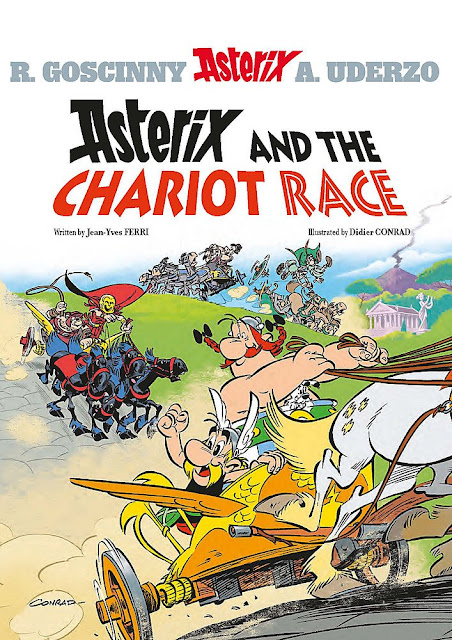 It's always sad when a beloved series' creators retire, die, or hand over the creative reins to other hands, so it is with great delight that I go on record as being pleased as Punch with the third volume of ASTERIX from its new creative team, ASTERIX AND THE CHARIOT RACE (2017), and the first that I've read since the departure of the creators. This 37th arc in the long-running Franco-Belgian adventure comedy set during the reign of Julius Caesar finds our Gaulish heroes engaged in grueling chariot race open to all comers from the known world, and the expected frenetic madness ensues.
Now written by Jean-Yves Ferri and illustrated by Didier Conrad, this story is a letter-perfect replication of the flavor ad style of Goscinny and Uderzo, that — shockingly — restores the iconic characters ad their world to the lively, crazy fun that hooked me to the series some 46 years ago. I am DEEP into Asterix as a fan, so I know its tropes and stylistic touches inside and out, so it's no idle compliment when I say that ASTERIX AND THE CHARIOT RACE is a welcome throwback to the glory days of stories like ASTERIX THE LEGIONARY, ASTRIX IN SPAIN, ASTERIX IN SWITZERLAND, THE MANSIONS OF THE GODS, ad of course ASTERIX AND CLEOPATRA. The script wastes zero time in getting straight to the main action, pitting Asterix and Obelix (whom a soothsayer has prophesied will be a champion charioteer despite his complete and utter lack of experience with the sport) against an array of international competitors from within the Empire ad beyond, and while Conrad's illustrations hew clone-level close to Uderzo's signature style, he imparts his own sensibilities to the characters and their body language in subtle ways that Uderzo never achieved, and that aspect leads me to wonder if Conrad was an animator or if he simply studied and absorbed quality animation design to a comprehensive degree. The recurring cast all look perfect, though now featuring bits of gestural business and "chicken fat" that are likely only detectable to the veteran Asterix-junkie, and the new characters, each saddled with the groaningly-fun but horrendous punny names the strip is infamous for, are all memorable, with my favorites being Kushite charioteer team and princesses "Nefersaynefer" and "Kweenlatifer," who bear more than a passing resemblance to Venus and Serena Williams (respectively).
Bottom line, this one's a fast-paced hoot that has me eager for the next installment from Ferri and Conrad. Final Grade: A+ 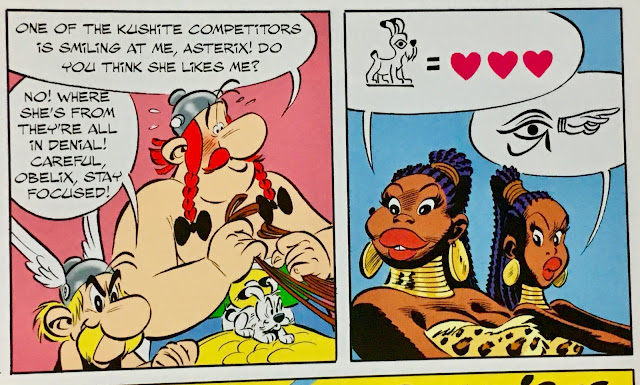 NOTE: The only caveat that I give in regard to this volume is the same one I give to pretty much all of the Asterix books, specifically the series' serial deployment of ethnic stereotyping. I look at it as a very Franco-Belgian exaggeration/caricaturing of all non-French people, done with zero conscious malice, but many others are likely to take offense, especially in today's climate, so keep that aspect in mind. To me, as with pretty much everything, it's a matter of context, but I fully understand why some would find it offensive in this day and age. That said, speaking as lifelong negro, a lot of us do indeed possess "liver lips," so dems da breaks.
Posted by Bunche (pop culture ronin) at Tuesday, December 31, 2019