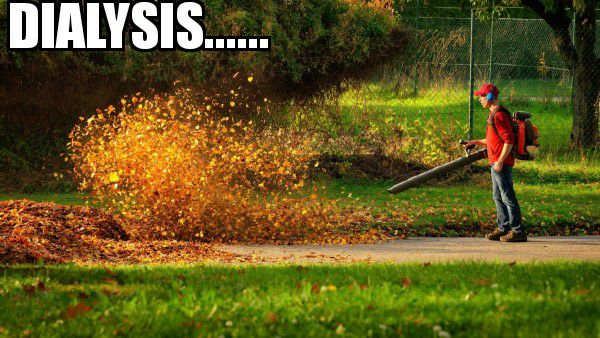 Yesterday's dialysis went without a hitch, though I did end up suffering from the usual foamy saliva and hiccups afterward, but I distracted myself from that with an evening over at Tracey's. That said, the one new negative hitch to yesterday was the guy I got on my car service ride home from treatment. He was a chatty Russian who has been a cabbie for 30 years, and he spoke fluent (though moose-and-squirrel-accented) English, so there was zero language barrier when for 25 minutes he filled me in on his philosophy of life, work ethics and politics.
Among other classic quotes from this guy were "I came here as a political refugee and was brought up all my life to work hard, that's why I am a conservative," and "Everything wrong with this country is because of Hilary." I was a captive audience as he cheerily went on and on about his views on America (which he loves) and the greatness of its Republican leaders, how Trump was the best thing to happen to this country and how the current treatment of him was a disgrace, and, my favorite part, the "fact" that all African-Americans amount to nothing in this country because they are "simply too damn lazy." When he let fly with that one, I lowered my mask, which obscures everything but my eyes, and told him "Well, I'm a 55-year-old African-American and I would still be working right now if not for falling victim to corporate downsizing twice and one firing for petty reasons, plus to say nothing of illnesses that rendered a full-time job out of the question for the past seven years. Without missing a beat, the guy explained that he did not find all black people lazy, just African-Americans. To explain his point, he noted that his daughter had married a hard-working Jamaican immigrant and that he had two grand-kids from that union that he loves more than anything, plus he was quick to point out that his son-in-law worked three jobs "and never slacks." He then recounted his history of having been in the U.S. Navy for some years, and how grateful he was to Trump for "channeling benefits to U.S. military, especially Navy veterans," and that African-Americans, despite being "lazy bastards and whores," constantly received endless benefits that they were unworthy of because they had not earned them due to their laziness. Oh, and he was also an advocate for the barring of immigration into the country because "illegals get all of the benefits and they did not earn any of them." He capped off that statement with full acknowledgement of his own immigrant status, but noted that he earned everything that he gets.
I endured all of this in gobsmacked disbelief, as I am used to such conversations on my car service rides to and from dialysis being automatically nipped in the bud by the language barrier. (My drivers from the insurance-provided service are invariably Russian.) But at no point was I offended, simply because the driver was so cheery and articulate while espousing his Trumpanzee leanings. He was charming , sweet, and intelligent, and his overall personality was utterly charming, despite me absolutely being in total disagreement with nearly everything that came out of his mouth. Anyway, when we finally arrived at my building and my driver wished me well, you could have heard a sonic boom from the speed with which I exited that car and made my way into my building. An evening at Tracey's was just what I needed after that, and I wrote all of this up not only to amuse all of you, but also so Tracey, Matt, and Shun could get the whole story. As previously stated, I was suffering from my usual post-treatment miseries, so my voice was mostly shot and talking was torture.