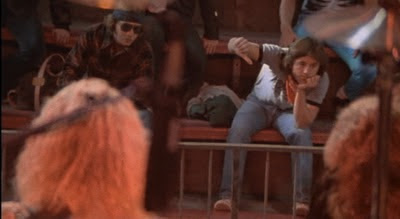 What more could there possibly be left to say about Rob Reiner's modern classic THIS IS SPINAL TAP?

When I and my old friend G-Man saw it in 1984 at Westport, CT's now-defunct Fine Arts IV theater, we'd heard it was some kind of spoof documentary that lampooned the ripe-for-satire world of heavy metal and all that goes with it, so we figured we'd give it a look. Going in, we didn't know the film was populated by many familiar faces from assorted TV comedies and films, but we immediately recognized Marty DiBergi, the "documentary's" director, as Rob Reiner, whom we of course knew after having grown up seeing him as Michael "Meathead" Stivic on ALL IN THE FAMILY. And it only got goofier from there, but we very swiftly forgot the actors and accepted them as the characters they so believably brought to life.

In case you somehow missed it during the course of the past nearly three decades (which I can't believe I just wrote!), THIS IS SPINAL TAP chronicles "the world's loudest band" during what turns out to be a tour laden with just about everything that could possibly go wrong working rock band. The hard-rockin' trio of rhythm guitarist David St. Hubbins (Michael McKean, aka Lenny from LAVERNE & SHIRLEY), mutton-chopped bassist and Lemmy lookalike Derek Smalls (Harry Shearer, who would later go on to TV immortality as the voice of several characters on THE SIMPSONS) and functionally brain-dead lead guitarist Nigel Tufnel (Christopher Guest, future director of BEST IN SHOW, in the comedic role of a lifetime) are the only constant members of a band that has existed since the days of the British Invasion of the 1960's. (NOTE: for you young whippersnappers out there, the British Invasion was the pop music movement led by The Beatles and The Rolling Stones that also opened the floodgates for a ton of mostly mediocre subsequent groups.) After undergoing several stylistic changes in order to ride on whatever trends were popular, the guys end up as Spinal Tap, a fairly generic "cock rock" band that churns out some of the most idiotically puerile tunes in metal history, and from there rolls an avalanche of gags that have since entered popular lexicon.

The meat of the film follows a tour in which Spinal Tap — who are now considered more or less has-beens — experiences one setback after another, a state of affairs made worse by the presence of St. Hubbins' incredibly pushy and annoying girlfriend, Jeanine (June Chadwick). Her arrival upsets the apple cart of the relationship between St.Hubbins and Nigel, and the audience soon realizes it's watching a tense love triangle. The deep-but-platonic bromance of St. Hubbins and Nigel cannot be denied and it's frustrating to see the rift between them caused by Jeanine's meddling and would-be creative input (and, to be fair, St. Hubbins blindly allowing her to get away with it). Most comedies of THIS IS SPINAL TAP's era traded in post-ANIMAL HOUSE tastelessness and gross-out humor in lieu of actual character development, but this film very much allows us to get to know and care for these loopy musicians and that is what gives the film its heart and staying power within the popular consciousness.

In closing, I would like to briefly take you back to Fine Arts IV with me and G-Man: As we watched the film, we understandably laughed our asses off, but we seemed to be the about only people in the place who were laughing at all. Our heartfelt guffaws eventually did not sit well with certain members of the tony Westport audience and a middle-aged woman chastised us for our perceived ill manners and lack of compassion for the poor subjects of the "documentary," an act that met with the approval of the surrounding patrons. It took me a minute to figure out why they were upset with us, and then it hit me. I turned around, incredulous, and said to her, "Lady, do you think this is an actual documentary?!!?" She answered in the affirmative, so I snapped at her, "This is a comedy, you idiot! Those are actors playing characters, not real people! They're all actors from other stuff! See the director? That's Meathead from ALL IN THE FAMILY! The blond guitarist is Lenny from LAVERNE & SHIRLEY! Jesus Christ!!!" There was a moment of silence from the audience after they processed being yelled at by some crazed nigger, but then came a slow wave of "Ooooh" as they realized they'd been duped by the film, such was its verisimilitude. From that point on the audience got properly into it and laughed along with me and G-Man. Idiots.
Posted by Bunche (pop culture ronin) at Saturday, January 29, 2011

One of my all-time favorite comedies. Siskel and Ebert, in their review, mentioned that it was so well done that some audiences believed it was a real documentary about a real band. Your story confirms it. Not to mention the fact that Spinal Tap went on the legendary Joe Franklin show, in character, and he had no idea they were putting him on--he thought they were totally for real.

Well done on setting the crowd straight Bunche. Apparently you can fix stupid.

However, you still can't dust for vomit.