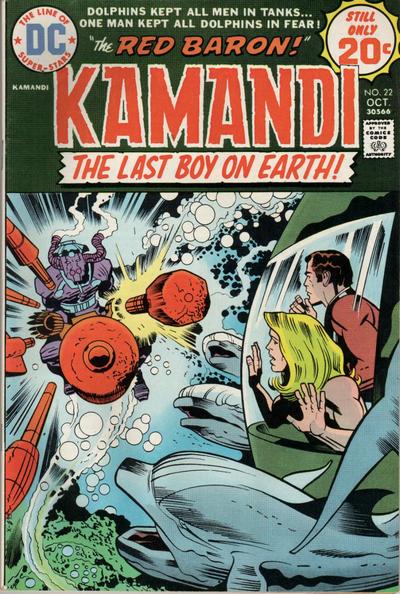 Let me tell you about KAMANDI #22 (Oct. 1974), specifically a sub-plot that emotionally wrecked the nine-year-old me.

Having followed the post-apocalyptic adventures of Kamandi, "the last boy on Earth," for a while, I had come to expect a lot of weirdness from his world which did the then super-popular PLANET OF THE APES series one better by making ALL of the world's animal's talking sentients. Therefore, I found it quite amusing when Kamandi found himself on the receiving end of the affections/crush of Teela, a sweet female dolphin from a high-tech undersea city of cetaceans. 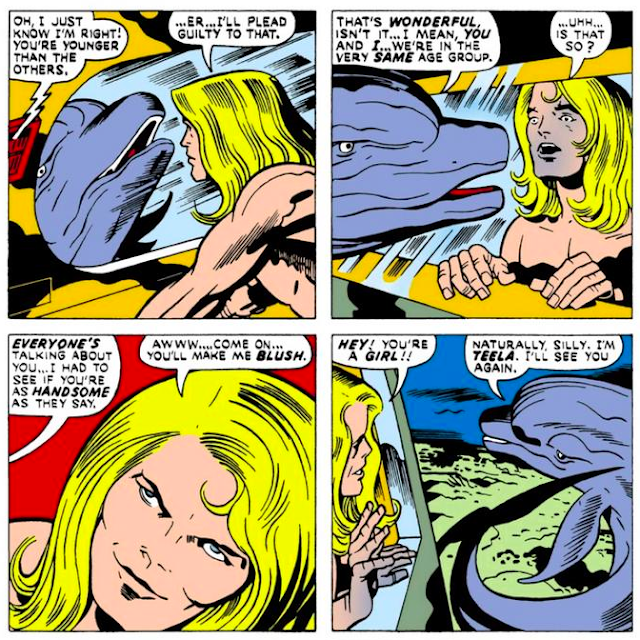 Kamandi, of course, lets her admiration go to his head and he soon acts like a complete and utter asshole when Teela tells him she's applied for a permit to make him her "squire." The dolphins of her world employ trained humans — who have low-level intelligence after the apocalypse, a la PLANET OF THE APES — as the active hunter half of a team in which the dolphin pulls them along on water skis as they engage their mortal enemies, sadistic killer whales who also can speak. Kamandi arrogantly tells her she had no right to apply for such a permit, but Teela explains that it's not a master/servant arrangement, but rather a partnership of great trust and intimacy, and a great honor. Kamandi dresses her down with an overblown "no means no" speech, and the stunning art of Jack Kirby perfectly conveys the exact moment when Teela's heart breaks and she turns away so he won't see her cry.
Then — and here's the devastating bit — Teela is suddenly and without warning brutally murdered when she is speared with two harpoons fired by the squire of an enemy killer whale. We see her body penetrated by the spears (but no blood, thus leaving it to our young imaginations, which only made it that much more horrifying) and hear her scream of pain and terror, at which point we cut back to a distraught and horrified Kamandi, whose previous bluster was now revealed to be an obvious act, losing his shit over Teela's murder. The issue ends with a vengeance-fueled Kamandi vowing to avenge her death by teaming up with another dolphin and taking the fight to her killer, the infamous "Red Baron," the lethal human hunting dog of the killer whales. And you had damned well better believe that Teela was avenged...BIG. TIME. 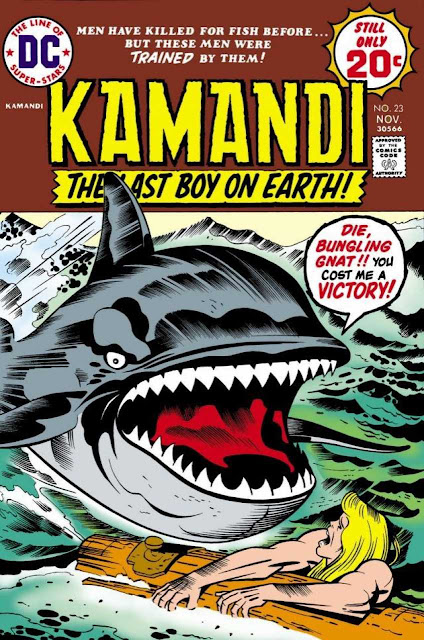 The cover to the subsequent issue: One of the rare times in the '70's when an awesome cover was not let down by lackluster material inside the issue.
KAMANDI #22 was the middle chapter of what is perhaps my favorite arc from Kriby's run on the series, and while his entire time on the book has my highest esteem, those three issues were sheer storytelling perfection that were among the four-color yarns that made me a comics fan for life. KAMANDI #22 gets my highest recommendation and ranks among the Top 20 best comics I've ever read. A+
Posted by Bunche (pop culture ronin) at Wednesday, July 19, 2017

Labels: COMIC BOOKS ARE FOR IDIOTS, COMICS THAT CHANGED MY LIFE

I really enjoyed this series as well.