A HAZARD OF SIGNINGS 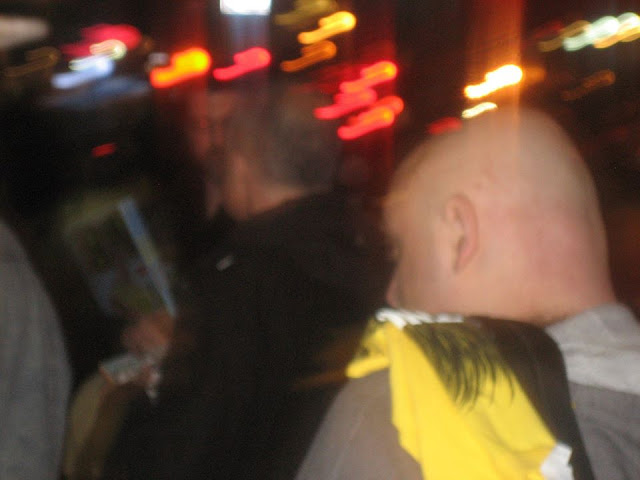 One of the dangers of serially attending geek culture signings is running into some of the same people from time to time, some of whom try even my legendary patience with poorly-socialized/mentally ill types. Case in point: this is a sneaked shot of a signing regular whose name I know but will not share, as I have every reason to believe that he is, to put it very kindly, quite mentally challenged, though I have not had that verified for certain. Anyway, I'd estimate he's at least in his thirties and his accent leads me to believe he's a Staten Island native.

I first encountered him a while back at a Corrine Orr signing, where I ended up stuck behind him on the signing line for maybe twenty minutes. He's as eager and friendly as a Golden Retriever puppy and his enjoyment of geek culture is evident as he accosts fellow line-standers whom he has never met and relates his entire life story, including the history of his stays in various care facilities, recitations of the laundry list that is his collection of celebrity autographs, details of his favorite movies, the porn stars he's met — whom allegedly want to "cut it" with him — and anything else that crosses his misfiring mind. That would be dealable, provided he'd eventually go away, but if you show this one even the slightest modicum of common courtesy, he'll be all in your face, going on ENDLESSLY about whatever, calling you "buddy," attempting to fist-bump you, and so on. The only way to be rid of him once he starts talking at you is for the line to start moving — at which he will thrust his fists into the air and let out a loud "YEEEEEEAAAAAAH!!!" — or to have some kind soul on line in front or in back of you take notice of your plight, pretend that they know you and call you over so you can catch up, and when you get close to your pretend pal, your savior leans in close and says, "Don't worry. I got you, man."
Tonight's record signing at Manhattan's Forbidden Planet was scheduled to start at 6:30pm, so I showed up a little over an hour early, situating myself as the fifteenth person on line, and waited for some of my friends to show up so I could squeeze them in. First to show up was Vinnie, and as we chatted, I heard the unmistakable voice of the fan I just described, and caught sight of his signature shaven pate. Upon realizing who it was, I leaned in close to Vinnie and filled him in on the guy, advising him NOT to engage. Vincent soon witnessed for himself that everything I said was true, as did my friends Xtina and Dark Heather when they showed up. The girls ended up in front of me, which put them directly in the line of fire for the guy's attention and being able to hear his ramblings to other innocent attendees, including the aforementioned porn star litany.
But the classic moment during all of this was when, during one of the staff's frequent announcements that those on line had to make sure to buy their items for signing before they began admitting the fans to the signing area, the bald dude announced "I HAVE A SHIRT!!!" The staffer who made the annoucement had clearly already encountered the guy previously during the evening and was obviously fed up with him, though he remained polite. Nonetheless, his tone of exasperated sarcasm was evident to all who were not mentally ill as he responded to that statement with, "Yes. You have a shirt. And it's YELLOW!!!" Those who heard that covered their mouths to hide their involuntary smiles and to stifle assorted titters. It sailed straight over our boy's bald head and he continued to prattle on to anyone within range.
Sadly, some of the guests were running behind schedule, so the start time extended to over 30 minutes beyond what anyone expected, so those near the bald lad were stuck in a limbo of awkward babble. Fortunately for the attendees, plus to say nothing of the signers, when the line finally began to move, things were handled in an organized and expedient manner, so items were swiftly passed down the signing line of celebs, allowing for brief photo-ops and such, but the fans would not have been allowed to just stand there and endlessly jaw at the guests. So the signers were spared time coming to a standstill as the bald guy addressed each and every one of them at considerable, synapse-misfiring length, and he was down the line and back out on the street in maybe five minutes.
Posted by Bunche (pop culture ronin) at Friday, January 12, 2018