Wartime frequently saw the release of propaganda and instructional materials designed to "explain" the strange ways of the foes of whomever was involved on the perceived "good" side of any given conflict, and this 1942 effort by TERRY AND THE PIRATES creator Milton Caniff — starring two-fisted white people Pat Ryan and Terry Lee, both deemed expert on all things Asian thanks to having cruised all over the China seas for nearly a decade, kicking ass on any yellow devils fool enough to fuck with them (or, in the case of the Dragon Lady, just plain fuck them) — does the serviceman reader the favor of laying out all the pertinent info on spotting that heinous enemy of the American people, the insidious "Jap." And, no, Caniff was not referring to cute Red Sea pedestrians from Oceanside.

What's weird to me about this page is that the unidentified officer looks a hell of a lot like actor James Shigeta (of THE OUTER LIMITS episode "The Architects of Fear"), one of the people we're supposedly being warned against. 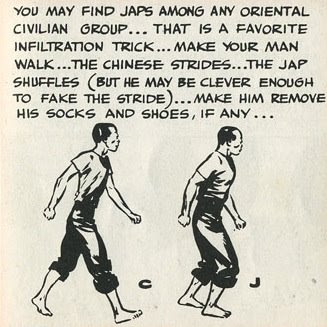 Remember, kids: look for a shuffle and not a happenin' pimp-walk. 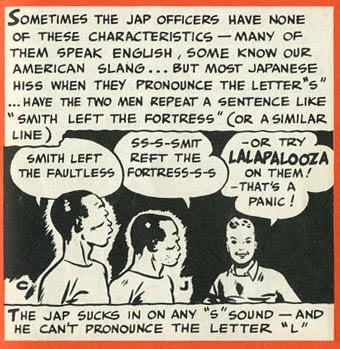 Better yet, have them prove their DOCTOR WHO knowledge by successfully pronouncing "Raxacoricofallapatorius." 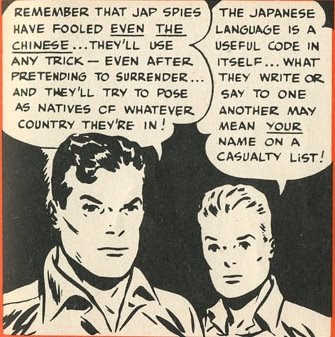 Hey, they're comic strip heroes.They wouldn't shit ya!
These are just some excerpts. The full text is quite enlightening, and I have it on good authority from a Chinese friend — thank you, Minh — that all of the info on the more detestable of the Asian races is one hundred percent accurate. Hey, if you can't trust comic strip heroes, who the fuck can you trust?

UP NEXT: the truth about Negroes and their secret plan to indoctrinate white American youth with their horrid and insidious "hip-hop" and "rap" musical stylings.
Posted by Bunche (pop culture ronin) at Tuesday, September 23, 2008

"Red Sea pedestrians" may be the greatest slang I've ever heard.

I can't claim credit for "Red Sea pedestrians;" it's a famous line stolen from MONTY PYTHON'S LIFE OF BRIAN.