BY WAY OF PROOF

Every now and then I'm asked by friends, relatives, co-workers and the occasional total stranger what I would look like if I ever deigned to dress up all nice 'n' purty for a formal occasion. It's an understandable question as I spend most of my time attired in an assortment of black t-shirts or shirts adorned with various punk rock and metal band art and logos, paired with blacks jeans, black shoes (sometimes Japanese tabi) and a (surprise!) black karate gi, but when I do have to dress up I do so in style. I'm very far from being the picture of sartorial elegance by anyone's estimation of such things so the existing photographic proof of me rockin' an outfit that would not have outraged the late and esteemed Mister Blackwell is rather limited, but here's a shot of me and my buddy Hughes at our pal Eddie's wedding a few years back. 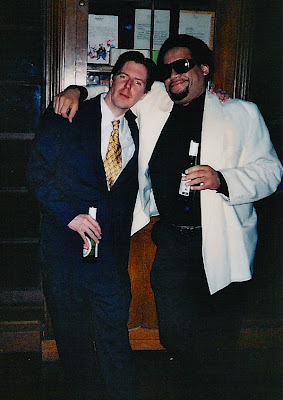 Two smoove mofos: Hughes and Yer Bunche, 4/3/2004
Admittedly I once again overdid it with the black — hey, dark colors are a fat bastard's best friend! — and the tie was rendered completely invisible against a matching shirt, but the white suit jacket lent a nice touch and allowed me to pretend I was Sean Connery just after blowing up that heroin refinery and slipping out of his wetsuit at the beginning of GOLDFINGER.