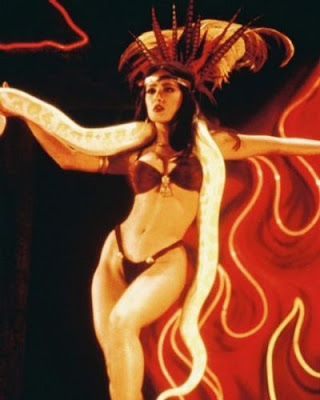 Santanico Pandemonium shows up and the audience forgets to breathe.

1996's crime/vampire mash-up FROM DUSK 'TIL DAWN polarized audiences into camps of those who loved its from-out-of-nowhere shift in tone from a straight criminals on the run yarn to a gory horror piece and those who despised it for the exact same reason, but the one thing both warring tribes couldn't help but agree upon was Salma Hayek's unforgettable showstopping entrance into the proceedings as "Santanico Pandemonium." An exotic dancer who headlines at the Titty Twister, an out-of-the-way Mexican topless joint catering to truckers and assorted biker types, the mouth-wateringly curvy, raven-tressed goddess in a bikini sensuously strolls out onto the stage, her head crowned with feathers and a huge albino boa constrictor draped about her luscious self, her mesmerizing body swaying to Tito & Tarantula's "After Dark." Hayek's Lebanese/Mexican beauty is simply hypnotic and she looks like a Frank Frazetta painting come to life, much moreso than the rotoscoped characters culled from his work for the "animated" feature FIRE AND ICE (1983). 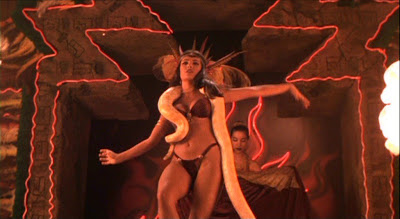 The audience in the movie theater was held as transfixed as the bar crowd on the screen, and I swear no one breathed for a few seconds when she showed up and began to move. When her number ends, this earthy vision reveals herself as a monstrously bat-faced Aztec vampire queen, the bar's staff and strippers her legion of blood-sucking minions, and the patrons immediately realize they're locked into the place with no chance of escape. Copious amounts of gore and violence ensue and the situation escalates to truly crazy levels, with stakings, disembowelings, throat-munching, you name it, all perpetrated by an assortment of vampires, some of whom are kind enough to engage in mayhem while their bare tits flop about (sadly, not Salma's). What's not to love? 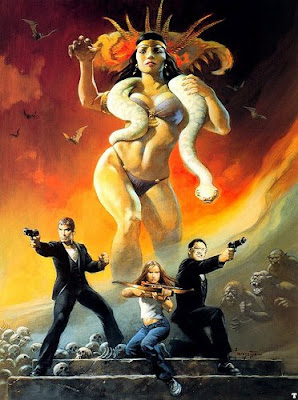 Legendary fantasy illustrator Frank Frazetta captures Hayek on the canvas. How weird must it have been for him to paint a woman who looks just like one of his buxom fantasy goddesses made flesh, and did he do the painting one-handed?
Posted by Bunche (pop culture ronin) at Friday, October 17, 2008

I forgot how good that movie was. Think I need to see it again soon...

I'm one of those who thought the movie jumped the shark right after Salma's dance, which was definitely the high point. I like goofy horror movies as much as the next fellow but there was just too much latex and slapstick vampire "action" on parade for my taste. I also preferred DEATH PROOF to PLANET TERROR so I guess there's just something about Rodriguez's directorial style that bugs me. He does know how to film a strip tease, that's for sure. I'd like to see him do an ode to Russ Meyer rather than and ode to Rick Baker for a change.

Oh man, I will NEVER tire of that scene. EVER. In this age of instant internet dirty fantasy fulfillment, that scene still has chops. I didn't know Salma Hayek had Lebanese ancestry. Apparently Lebanese plus Latin equals hips to die for (see Shakira).