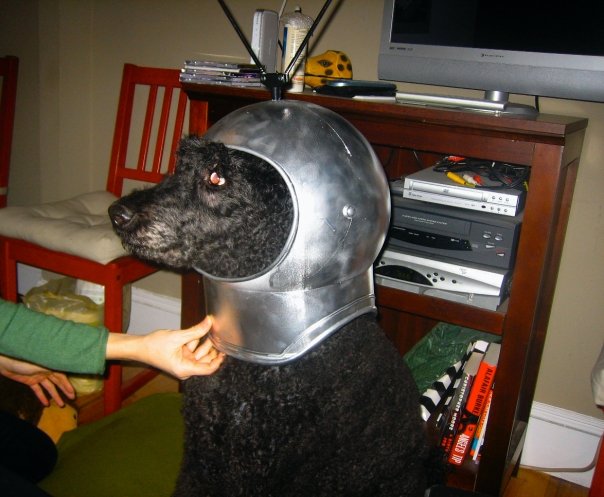 Reggie the Poodle, silently telling Laika to suck it.

It is with a very heavy heart that I note the untimely passing of Reggie the Poodle, the stalwart and hilarious companion of my friend Suzi, who deeply affected my life during the all-too-short three years in which I knew him. He was a sweetheart beyond compare and exhibited a breezy and infectious attitude toward life, an aspect that allowed him to remain very much in touch with "puppyness" well into what would have been his late sixties had he been one of us naked apes. 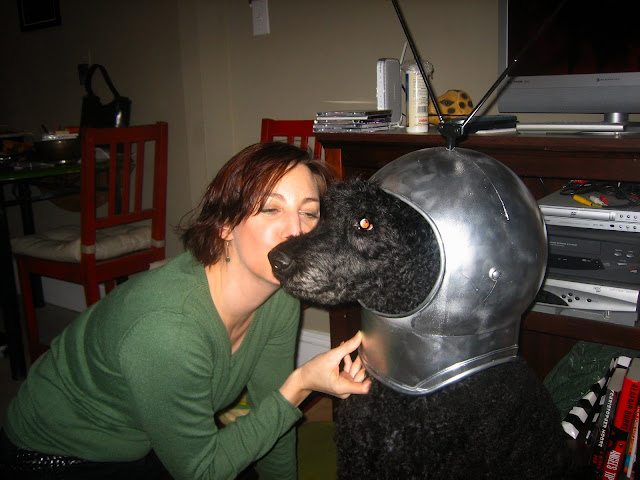 Reggie with his human, Suzi.


I always loved to visit with Reggie for a myriad number of reasons, but chief among them was that I could tell he was always genuinely glad to see me whenever I showed up, and he would press his large Standard Poodle body against me in unabashed entreaty for attention and a vigorous scratch behind his ears or whatever part of his anatomy that he was inclined to proffer. I referred to fulfilling his requests as "giving Reg a scritchy," and he sure as shit loved himself some scritchy action. He was also able to perform a number of cute and occasionally questionable tricks when asked by Suzi, my favorite of which was when he'd splay out on his back and obscenely display his junk — twig, no berries — when Suzi would sweetly say "privates." When he did this, I'm convinced he knew the silliness/gross-out potential of the act, thanks to the tongue-hanging-out shit-eating grin that would split his face in two like he was a crocodile or something.

According to Suzi, one of Reggie's notable behaviors was that he would "claim" various gay male friends of hers by laying his big, black body across whatever young swain he had chosen and not allowing said man to move away. Once Reggie had you, you were his bitch, and I was actually kind of disappointed that Reggie never claimed me during the many times I hung out at Suzi's, not even during last New year's Eve when I crashed on the extra-comfy fold-out bed in the living room. Reggie and I were very find of each other already, so I guess I should not be insulted and perhaps should instead take his lack of claiming me as his way of acknowledging my staunch love of pussy.

And now my fuzzy friend has joined the Choir Invisible, so I hope his (probably intentional) off-key howling completely fucks up any rendition of "Nearer, My God, to Thee" that he's called upon to participate in. I loved Reggie very much and consider him the litter-mate I never had, right next to my own late and greatly lamented pooch, Sam (aka "Humpy").

Goodbye, sweet Reggie. Your awesomeness and considerable canine faggotry will never be forgotten, and I hope you understood and appreciated the 40-ounce "for my dead homies" Budweiser pour-out I did in my bathtub in your honor. I will miss you, dear poodle, so never forget that you were deeply loved by both me and the human you lived with. You were a terrific presence and your untimely exit will leave an enormous void in the hearts and minds that you so unconditionally touched.

Oh, and when you meet that commie space-mutt Laika in the Afterlife, be sure to bark "U.S.A.! U.S.A.!" as queenily as you can into his mug. He may have been the first into space, but you looked way more fabulous in your space helmet. 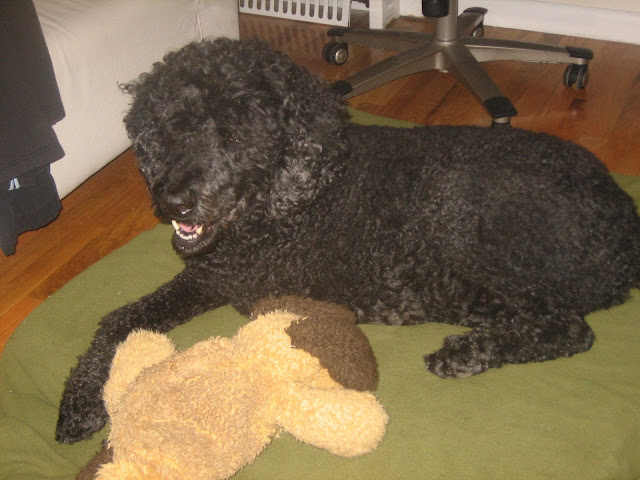