Ah, Connecticut, one of my least favorite places to visit. I'd had more than enough of the place thirty years ago and would never return if not for the presence of a few friends and family, but I'm willing to brave its boredom for the annual festival of excellence that is my mom's cooking on Thanksgiving. Knowing full well that there would be nothing to do other than sit in front of a TV that was set to nothing but MSNBC, Hollywood gossip shows and DANCING WITH THE STARS — obviously stuff my mom is addicted to — I armed myself with a backpack full of comic books and some DVDs and girded myself for the non-events to occur between Tuesday afternoon and Friday afternoon, anticipating the feast that loomed large at my mom's house (in which she has now resided for just over three decades).

Upon arriving, I finally got to see for myself the damage done when the next door neighbor's house was gutted by a fire some two months ago. Luckily the guy got out and was unharmed, but the house was rendered a charred and brittle shell and now lays fallow while the insurance company takes its sweet time in sorting out the particulars. My mom says that the huge industrial dumpster that now takes up space in the neighbor's driveway arrived the day after the fire, was more or less filled with debris by a cleanup crew, and has just sat there like a big red eyesore ever since. 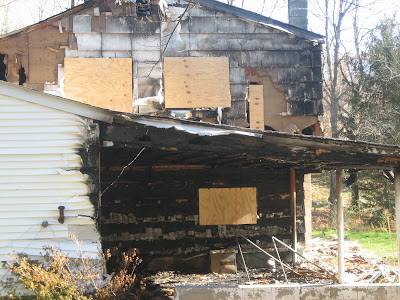 What remains after our neighbor's house pretty much burned down about a month and a half ago. (He was unhurt.) If the wind that night had been stronger and blowing to the Southeast, this could have been my mom's house. 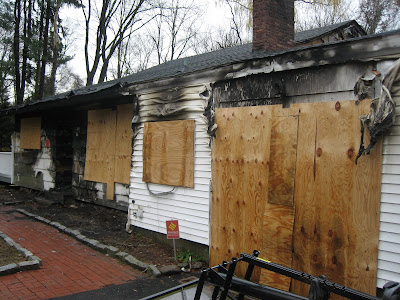 Seriously, the place was completely gutted and you could still smell the charring like it had happened yesterday.

As she gets older and money gets ever tighter, my mom has given serious thought to selling her house and moving into a condo, but no one's going to buy a house located next to a burnt-out husk that looks like something out of the bombing of Dresden, so I hope for her sake that the insurance company gets off its ass and sorts this shit out.

On the day before Thanksgiving, I skipped breakfast in order to make room for my favorite fast food repast whenever I hit Fairfield County, namely the drool-inducing foot-long chili dogs at Dairy King in Norwalk. As luck would have it, I arrived on the day of the chili dog special, which was a win for me because they are the sole food item on the menu that I go there for. 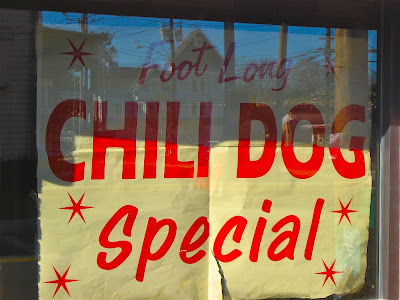 A harbinger of the magnificent flatulence to come. 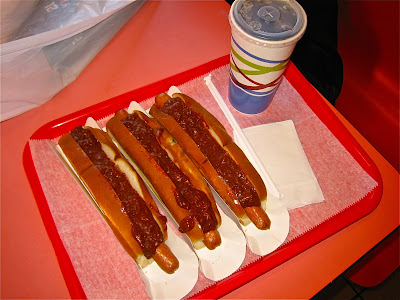 Three foot-longs slathered in spicy chili, fresh off the grill, with drink. This belly (and bowel)-busting excellence totaled a mere $7.52. In NYC this would be around twelve bucks. Maybe even more, depending on where you went.

Another of the few aspects that make my visits to Westport tolerable are my visits with the Conners, the completely excellent and artsy parents of my dear old friend Amanda (known to you comics geeks out there as the sickeningly talented artist of DC Comics' Power Girl and her infamous collaboration with Garth Ennis, THE PRO). The Conners provide me with a haven from the expected dysfunction in the house where I grew up (or not), and I cannot express how much I appreciate them opening their home and hearts to me when I need a break. (For the record, this Thanksgiving's familial dysfunction at the Bunche homestead ranked at about a 4 on a scale of 1-10, so it was relatively mellow).

When I arrived at the Conners', Amanda's dad, Al (a fun and genuinely hilarious Sean Connery type from Louisiana), was busy in the kitchen, making an elaborate stuffing, while Eulayla, Amanda's utterly excellent and sunny mom, labored over a pencil/marker/watercolor portrait of her church's children's choir. I did a brief hit-and-run, dropping off another assortment of comedies and violent kung fu flicks on DVD for Al to enjoy (we are definitely kindred spirits), as well as picking up the last batch that I lent him and an intriguing dish that he'd made which fused Mexican and Cajun cuisine. 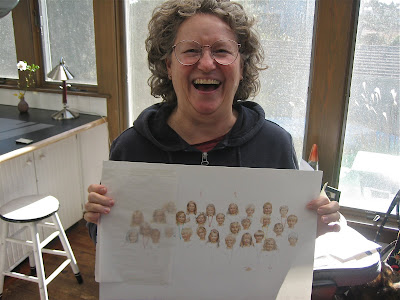 My friend Amanda's mom, the awesome Eulayla Conner, with a work-in-progress. 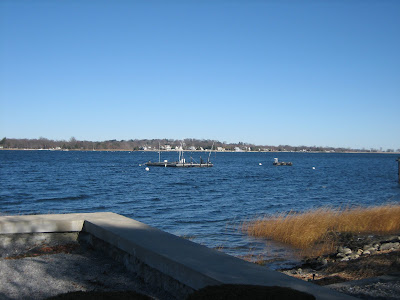 The view from Amanda's parents' driveway. Imagine growing up across the street from that!

That night saw me and my buddy Chris watching the four episodes of THE WALKING DEAD that have so far aired, and after that I turned in around 1:30 AM. (By the way, I'll get around to discussing the TV adaptation of THE WALKING DEAD when the season is over.)

I awoke around 6:30 AM after a fitful night of sleep on the medieval torture implement that is the fold-out couch in what used to be my bedroom, and all too soon my mom came downstairs, brewed herself a strong cup of Joe, and settled in for the three-hour pagan festival in honor of crass commercialism that is the Macy's Thanksgiving Day Parade. My feelings about that show are well-known, so let it suffice to say that I focused on cruising the Internet and reading a book on lurid 1950's horror comics — the excellent THE HORROR! THE HORROR! by Jim Trombetta — as the saccharine floats and lip-synching disposable pop stars of the moment filed by. However, this year threw me a curve ball when the NYPD marching band showed up playing the theme music from the classic anime series SPACE BATTLESHIP YAMATO (1974, better known to American audiences when it ran here as the cult series STAR BLAZERS), a totally unexpected happenstance that may be the geekiest moment seen in that parade since the infamous and unintentionally hilarious PLANET OF THE APES float back in 1974.

The NYPD's version.
Seriously, never in a million years would I have expected to see that during the parade!

When the parade finally lurched to a halt, I watched the dog show that immediately followed it, while my mom spent the majority of those two hours putting the finishing touches on the meal that she began preparing at 8:30AM. When we took our customary places at the dining room table, we tucked into one of the best Thanksgiving meals my mom ever concocted, and that really saying something. 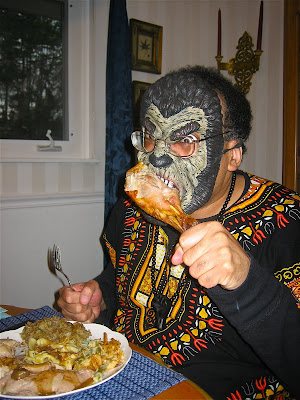 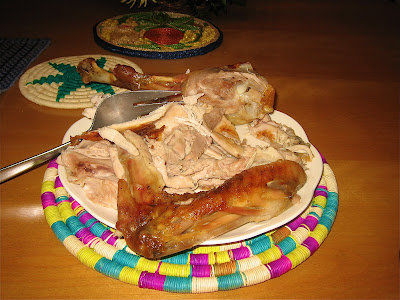 A selection of white and dark meat once the turkey was made more manageable for Round 1 of the shameless gorging. 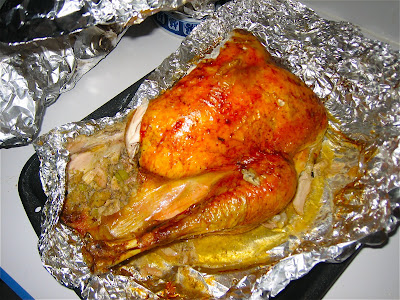 The turkey, obviously after falling victim to Round 1. This was one of the most succulent birds I've ever tasted over the course of my 45 years, and the thigh meat was especially outstanding. 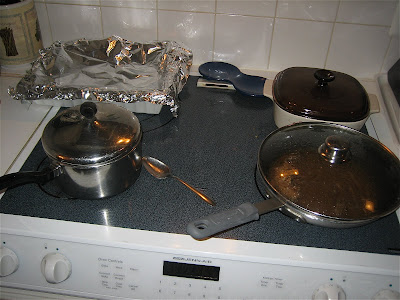 Just a portion of the feast my mom prepared: extra stuffing (in the foil-covered pan, green bean casserole, a pan full of some truly obscene homemade gravy (with giblets), and noodles boiled in turkey broth/drippings and the bird's neck. Not shown: collard greens (aka "major league fart fuel"), fresh rolls, and extremely spicy jambalaya with Andouille sausage and shrimp. 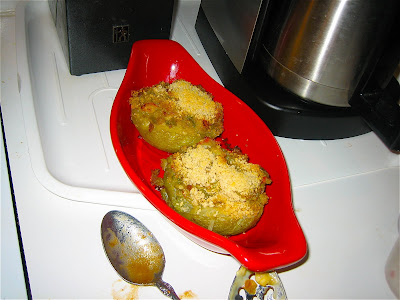 The aforementioned tasty and intriguing fusion of Mexican and Cajun cuisine, prepared by Amanda's dad, Al.

Following the completely obscene gorging of Round 1, my mom and I retired downstairs to the family room, where we plopped down to digest, with my mom falling asleep into deep food-coma while I watched the classic Godzilla-and-pals-kick-ass-on-alien-invaders flick, MONSTER ZERO (1970). 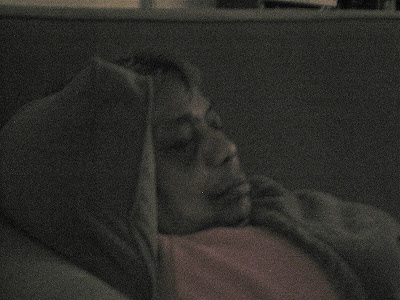 Mom, passed out from sheer food-coma. 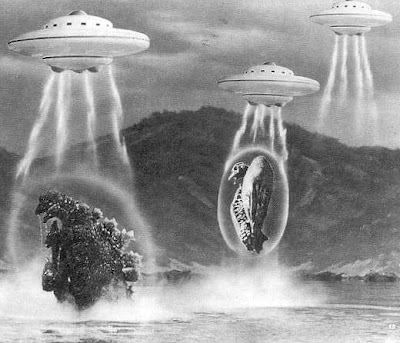 Just one of the many scenes in MONSTER ZERO, a film that has delighted me since I first saw it at the age of five.

Other than the food, the most important element to a good Thanksgiving, in my opinion, is the annual running of the giant monster flicks, a tradition adored and still held by many of us who grew up in the Tri-State Area during the 1970's. Started by some incredibly merciful programmer at NYC's Channel 9 in the pre-cable days, the way it worked was that they would run the original KING KONG, SON OF KONG and MIGHTY JOE YOUNG on Thanksgiving as a marathon to keep the kids from being bored while the adults got shitfaced and treated one another with viciousness that would have done Edward Albee proud. The day after Thanksgiving also gave us kiddies something to watch in the form of an impromptu Godzilla flick mini-marathon, among which could often be counted (among others) a rotation of KING KONG VS. GODZILLA, GODZILLA VS. THE SEA MONSTER, GODZILLA VS. THE SMOG MONSTER, and of course MONSTER ZERO. Those flicks were a ton of fun, but they also kept us well out of range of hungover and volatile parents and attending relatives as they suffered for the indulgences of the previous day. If I could have gotten away with it I would have done the full and proper two-day marathon treatment, but as has been the case for many Thanksgivings over the past fifteen years, both my mom and I have chosen to spare ourselves the presence of guests in a successful bid to keep ourselves as comfortable as possible and not have to get dressed up or anything, so there was no company and no kids that needed the old school Channel 9-style distraction. Also my mom is not into the giant monster stuff (though she is the one who introduced me to the genre when I was four), so there was no way I would have been allowed to get away with more than one token rubber suit/city-stomping opus, so I chose MONSTER ZERO as this year's flick because I watch KING KONG at least twice per year anyway and I hadn't seen the Godzilla classic in quite a while.

After that, I pretty much spent the rest of the evening reading while my mom went back for Round 2, something I didn't feel peckish enough to do until just around midnight ("Brown Sugah!!!"). And with that, Thanksgiving 2010 came to a pleasant end and I returned to the walls of the Vault, whereupon I promptly crashed hard for two solid hours.
Posted by Bunche (pop culture ronin) at Friday, November 26, 2010

Shit, how did I miss the Star Blazers theme? I must have seen just the other 2:50 minutes of nonsense, and picked exactly the wrong moment to hit the growler again. ;)