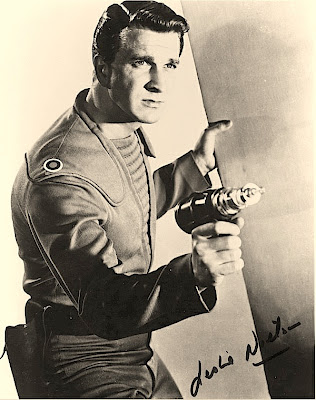 Leslie Nielsen as Commander J.J. Adams in the science-fiction landmark, FORBIDDEN PLANET (1956).
Leslie Nielsen, one of the unlikeliest of actors to become a comedy superstar, has perished following complications from pneumonia. That news hits comedy fans right in the guts because Nielsen's role as Lt. Frank Drebin, the bizarre protagonist of the insanely short-lived (six episodes total) TV series POLICE SQUAD and the NAKED GUN film series, has become a milestone character in the annals of silly humor. Looking like your straightest uncle, Nielsen's seeming blandness worked in his favor and lent Drebin's exploits the perfect flavor for his over-the-top world. The classic Drebin bits are many, but my nomination for all-time favorite goes to Drebin's impersonation of Enrico Pallazzo, a renowned opera singer, in THE NAKED GUN (FROM THE FILES OF POLICE SQUAD (1988).

But to me Nielsen's most important contribution to cinema was his portrayal of Commander J.J. Adams, leader of the crew of the spaceship C-57D in 1956's still-stunning FORBIDDEN PLANET, an out-of-this-world take on Shakespeare's THE TEMPEST. The film was arguably the most visually spectacular of the 1950's science-fiction films and still ranks among the most respected of its lot, thanks to such memorable elements as its all-theremin score, the Krell city (a community space clearly designed for non-humanoid forms, a rarity in sci-fi movies and TV even today), the id monster (an animated horror that scared the shit out of me when I was a kid), Robby the robot, Doctor Moorbius, his foxy daughter Altaira, and much, much more, with Nielsen's Commander Adams serving as the intelligent and capable anchor for a crew that encounter far more than anticipated upon landing on the planet Altair IV. If you've never seen FORBIDDEN PLANET, please take my word for it and check it out immediately.
Posted by Bunche (pop culture ronin) at Sunday, November 28, 2010

Agreed on all counts.

His rendition of "The Star-Spangled Banner" is etched so deeply into my brain it's actually hard for me to remember the way the song really goes. (Luckily I'm not called upon to sing it much anymore.)