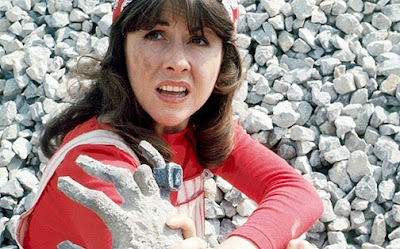 Elisabeth Sladen as Sarah Jane Smith, during her classic years on DOCTOR WHO (1973-1976).

It is with a very heavy heart that I bid a fond farewell to actress Elisabeth Sladen, known and beloved worldwide as plucky journalist Sarah Jane Smith, an ordinary Earthwoman whose life was forever changed upon meeting the Doctor and embarking on a three-year stint as a traveler through time and space on DOCTOR WHO. Sarah Jane is oft-cited as perhaps the greatest and most popular of the Doctor's many companions and she was brought back for some memorable guest appearances on the rebooted series (which began in 2005) before being spun off into THE SARAH JANE ADVENTURES.

Sarah's special to us first-generation American DOCTOR WHO fans who first saw the show around 1978 or so, when it debuted in the States with the first arc featuring the fourth Doctor, played by Tom Baker. Sarah first appeared as a companion to Jon Pertwee's third Doctor, sticking around after he regenerated into Baker, and she swiftly earned a dear place in the hearts of her newfound American audience. When Sarah was brought back in 2006's "School Reunion," Sladen added another layer to Sarah as she confronted the Doctor for abandoning her some twenty-nine years earlier, and the episode was emotional tour de force for both the characters and the fans.

So thank you, Miss Sladen, for all of the quality entertainment and for bringing to life an indelible everywoman who found herself constantly mired in the fantastic. I hope your passing from the scourge that is cancer was as swift as possible. To bid you good rest, I promise I'll watch "School Reunion" this evening. 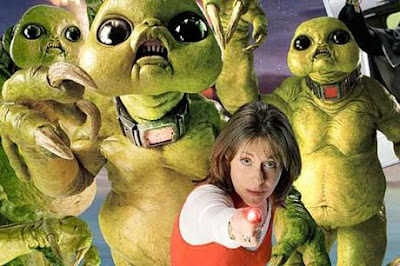 Labels: GEEKIN' OUT-DOCTOR WHO, THE BOOK OF THE POP CULTURE DEAD

Gutted to hear that! Lovely lady.
From Pertwee to Baker to Tennant, always had a bit of a thing for her...

I'll stick on Genesis of the Daleks tonight in memory.

Loved her reprise of Sarah Jane Smith a couple of years ago.

The only companion who rivaled her, imho, is Billy Piper.