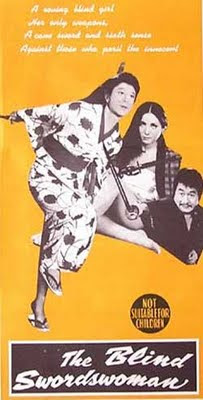 One of the hazards of being a fan and collector of the kinds of movies I'm into is the fact that I sometimes get lucky and find a flick I've always been looking for, something hard to find that from all reports should not exist on DVD, and I snap up the film in question, realizing (often correctly) that I will never find that film again. And sometimes, once said film is acquired, knowing that it's in my possession and unlikely to migrate, I put the film aside to watch somewhere at a future date. Consequently I have a decent-sized stack of movies that have been sitting here in the Vault gathering moss for what is in some cases years, and I'm slowly making my way through them. One such case in point is THE BLIND SWORDSWOMAN (aka CRIMSON BAT, THE BLIND SWORDSWOMAN ), a DVD that I found over four years ago during my time working at the barbecue joint. I bought it, brought it home and watched maybe ten minutes of it before turning it off to save it for another day because it turned out to be a poor-quality dubbed "gray market" transfer from a somewhat-worn Dutch VHS copy, complete with Dutch subtitles. I've endured films and TV shows whose visual quality was dodgy at best due to their rarity, so I could have handled sitting through THE BLIND SWORDSWOMAN at the time, but I just wasn't in the mood, plus I did not expect to obtain such a shoddy specimen from my favorite wholly-reputable video store. Now, over four years later, I finally sat through it and it frankly was a disappointment.Curiosty and genre completism only goes so far, and even after having been aware of this film for twenty-some-odd years, it just wasn't worth the wait.

THE BLIND SWORDSWOMAN is an old school chambara film from the genre's glory days, cranked out by Shochiku as a blatant cash-in on Daiei Pictures' long-running and highly successful Zatoichi series. In case you aren't up on your classic chambara flicks, the Zatoichi series depicted the adventures of Ichi, a wandering masseur and low-life gambler who possessed sword skills that were staggering in scope and made all the more impressive because the man was utterly blind. In total there are twenty-six films in the original series featuring the character as played by the incompariable Shintaro Katsu (plus a television series), so it was inevitable that someone would eventually rip them off. There have been several such clones since the late-1960's, but to the best of my knowledge THE BLIND SWORDSWOMAN was the first to not only do so with apparently zero trace of shame, but it was also the first to recast the Zatoichi template in female form. 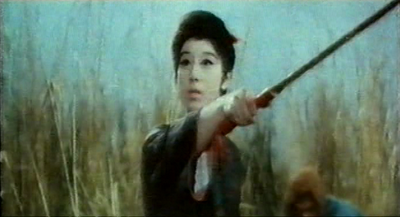 Yoko Matsuyama as the distaff Zatoichi, Blind Oichi.
In the first of four swiftly-made features released from 1969 through 1970, we meet Oichi (Yoko Matsuyama), a poised young woman who was abandoned during childhood by her prostitute mother (who was running away to make a new start with her lover). While searching for her fleeing mother in a terrible rainstorm, lightning strikes a tree near young Oichi , causing a large branch to fall on her and render her unconscious, and when she awakens she is permanently blind. (It is not made clear if she was blinded by the close proximity of the lightning strike or by suffering a head injury from the collapsing branch.) From there the girl is raised by a kindly old man who, unbeknownst to her, was once part of a gang of criminals whose leader has risen to prominence and seeks to eliminate all those who knew him back in the days. The old man raises Oichi until she's around eighteen years of age, at which point the old man is horribly murdered by his former crony and his gang, and Oichi finds herself rescued from them by a kindly ronin who sees in her graceful movements the makings of a natural sword master. The ronin trains Oichi in the ways of the sword for the next two years or so and she reveals herself to be a prodigy, mastering the weapon to a lethal degree and developing an unerring talent with her red-lacquered cane sword. Thus armed,Oichi is ready to embark on the requisite quest for vengeance, and possibly locate her long-absent mother in the process. Oh, and she also falls in love with the ronin , who splits once he's aware of her romantic interest, feeling she'd be better off without him. Needless to say, she's devastated.

The rest of the film is about as rote as one from this genre can be and its plot points are enacted with as little genuine interest for the viewer as possible. The narrative also leaps back and forth in time to establish much of the back-story, but it's accomplished in such a confusing way that it at times seems as though the film's reels have been strung together at random by an editor who's necked far too much saké . When the film's several plot threads are finally resolved, the results just aren't that interesting and when the identity of the main villain is revealed, we have no idea who the guy is anyway, so we just don't care. And, as previously mentioned, the film's chief goal was to ape the Zatoichi films, going so far as to re-stage tropes common to that series and even have a stumbling blind masseur show up to be abused by assorted yakuza assholes in a seedy gambling parlor. It's actually quite embarrassing. Scenes of Zatoichi getting the upper hand on crooked gamblers by using his heightened senses and slashing the shit out of all and sundry turn up in damned near every film the character's in, so the use of that trope in this outright ripoff is truly egregious and an example of the film's overall bankruptcy of originality.

Yoko Matsuyama is rather bland as Oichi and her face remains expressionless throughout the majority of the narrative, giving her a doll-like demeanor that makes her quite hard to empathize with. The film's dubbing also does no favors for the story, and I wish I'd been able to see it in the original Japanese with subtitles. The voices in the dub that I saw were all recognizable as actors familiar to anyone who's seen the many Shaw Brothers kung fu flicks dubbed for U.S. distribution in the west from the beginning of the "chopsocky" boom of the 1970's 'til it fizzled out in the early-1980's, when those films found a second life as part of World Northal's syndicated DRIVE-IN MOVIE television package, and their rather exaggerated delivery did not work for a film as typically Japanese-style somber as this one.
Of real interest only to chambara completists and even then not really recommended, I suggest that those who are interested in THE BLIND SWORDSWOMAN wait until a company like Kurotokagi Gumi issues a remastered version with subtitles. They recently put out a gorgeous edition of the series' second installment, BLIND SWORDSWOMAN: HELLISH SKIN, and that is a film worth seeing. (More on that shortly.)
Posted by Bunche (pop culture ronin) at Wednesday, April 13, 2011