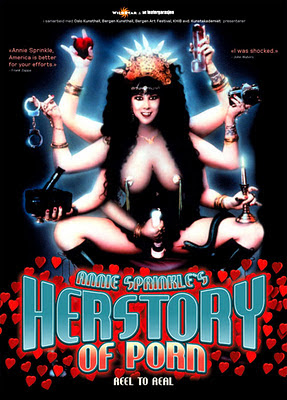 As is probably apparent to my regular readers, I am unashamedly fascinated by pornography, not merely as a means to a solo orgasmic end, but mostly as an earthy, fleshly reflection of who and what we are as sexual human animals. And while I have been known to enjoy such material for its most obvious intended use from time to time, I’m always interested in learning about the history of the medium, a form that goes back as far as the moment when the first cave-person fashioned a curvy goddess statue from crude earth or put pigment to cave wall to depict primitive images of copulation. 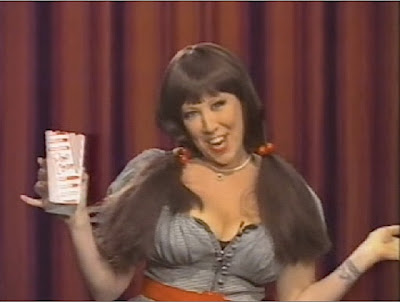 Our humble raconteur and documentary subject, Annie Sprinkle (née Ellen Steinberg).
For those of you out there who have no idea who Annie Sprinkle is, she's a notorious bisexual porn star/prostitute/stripper/performance artist who was born Ellen Steinberg in Philadelphia and has re-invented herself several times throughout her career, now enriching the world with performance pieces and other works that disseminate perhaps the most sex-positive vibes in American society's hypocritically puritanical sexual landscape. For what it's worth, I really like Annie's sweet and adorable persona and the joy and utterly shameless happiness in sex that she merrily espouses like some kind of bubbly and lewd Yoda with big ol' titties, so I was totally down with her acting as a guide through the history of American porno's golden age.

Anyway, following that overwhelming fetish-pummeling, Sprinkle's focus mercifully shifts to 1982's DEEP INSIDE ANNIE SPRINKLE, which she claims was the first porno film conceived from a woman's point of view, and from which she moved into crafting a more female-centric pornographic experience. Then, as the 1980's got going and the era of "new age" healing and philosophy dawned (which, if you ask me, was little more than a re-discovery of the Eastern stuff the '60's counter-culture dabbled in, only now seasoned with dashes of neo-paganism), Sprinkle hooked up with a Tantric adept who guided her into her first deeply spiritual experience with sex and sexuality. She emerged from her time with him a woman energized and transformed, who sought to share her epiphany with all whose hearts and minds were open to it, as well as seeking to educate the people on safer sex so awareness would be raised and the very act of loving would not continue to be a sensually-disguised Grim Reaper in the age of AIDS. That era in Sprinkle's development can be seen as akin to a narrative in which the protagonist, having undergone the assorted tests that would forge them into a hero that rang true to Campbell's theories on "the heroic journey," comes back to the world they left behind in search of adventure and learning imparted through said trials, returning with a beatific sense of wisdom and self. Some would find such espousing of these sentiments to be just so much self-serving hippy-dippy bullshit but I definitely get where Sprinkle's coming from when she discusses it, and my buying into what she has to say on the subject goes back as far as when I read her excellent and highly recommended book, POST-PORN MODERNIST (1991).

Labels: FLICK YOU, PORNO-ROCITOR, THE MAGIC OF PORNOGRAPHY