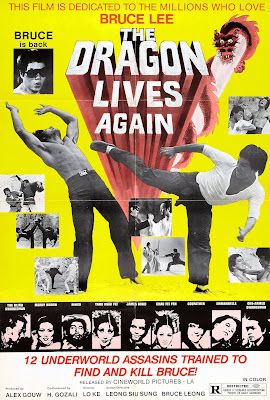 "Her pussy's in this plot, too! She's using it to murder me!'
-the king of the Underworld, shortly after Bruce Lee saves him from being fucked to death by Emmanuelle. (Yes, you read that right.)

If you're a regular reader of this site, you know I love and cherish movies from many genres that could kindly be called "completely fucking ludicrous." With that in mind, please allow me to introduce you the what is hands down the most insane, ridiculous, stupid, and just plain downright shameless example of the deservedly maligned "Brucesploitation" genre. For those not aware of its dubious existence, the Brucesploitation sub-genre of martial arts films were cheapie cash-ins made in the wake of Bruce Lee's untimely demise, invariably starring dudes who bore a passing resemblance to the master at best, and none of whom were anywhere near being within the same galaxy of Lee's skills. The legion of those films are mostly boring and outright necrophiliac trash, but THE DRAGON LIVES AGAIN is both wildly entertaining and an intentional comedy, and as such it deserves to be not only rediscovered but also restored and remastered. In fact, I'll even go so far as to say that this film is more entertaining than any actual Bruce Lee movie. How, you may ask, is that possible? Allow me to explain... 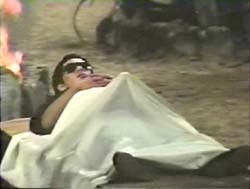 Bruce Lee's priapic corpse arrives in the Underworld.
It's 1973 and the great Bruce Lee is dead. His corpse, equipped with cool shades and what appears to be a raging hard-on — no, really — arrives in what is apparently an Asian variant of the purgatory, and we are informed that when people die, their bodies and faces change so they no longer look like they did when alive and kicking (which is a convenient way of glossing over star Bruce Leung's utter non-resemblance to Bruce Lee). After arrogantly insulting the king of the Underworld and being given back his chucks (which were taken away when they were revealed not to be an impressive boner), Bruce wanders the local streets and encounters a number of majorly copyright-infringed characters in a noodle restaurant. We're talking Popeye (played by Chinese actor Eric Tsang) and Kwai Chang Caine from KUNG FU (played this time not by David Carradine, but by an actual Chinese guy) on the side of good, and Zatoichi, James Bond (!!!) and Clint Eastwood (played by a Chinese actor and dressed like the Man with No Name from the classic Sergio Leone spaghetti westerns). 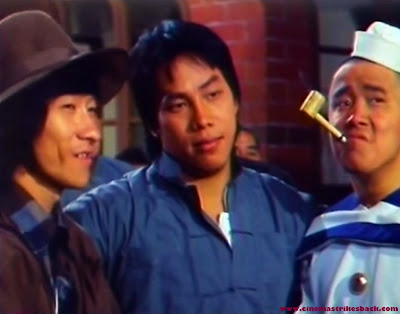 One of the king's two wives is especially into Bruce because she's a fan of his movies — how she saw them in the Underworld is not made clear — and she desires nothing more than to have him beat her with his "powerful weapon" (his chucks) and make passionate love to her...

It's at this point that I think it's appropos to note that I'm neither drunk nor making any of this up. All of this lunacy is actually in the movie.

Anyway, Bruce rejects the advances of the king's wives, thus greatly insulting them and spurring them to send Count Dracula (pronounced here as "Draculer" in the dub) and his gang of zombies to kick Bruce's ass. That only pisses Bruce off, so he dons his famous Kato outfit from THE GREEN HORNET (where he got it from and why he does this is anyone's guess) and hands out ass-whuppings like they were Halloween candy. And just when things look really bad for Bruce, he reveals the secret "Third Leg of Bruce" technique, in which he magically produces an extra leg with which to kick Dracula square in the face. 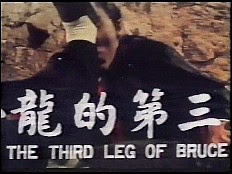 Also, the bad guys, led by the Godfather and the Exorcist (who has an atrociously bad French accent for no explained reason), want to recruit Bruce to help them overthrow the king, but cocksure Bruce doesn't give a fuck about that (or much of anything else for that matter) and seeks nothing other than a way back to the world of the living. As the bad guys launch assassination attempts against the king, including the aforementioned and memorable attempted murder by pussy, Bruce intervenes and is made captain of the king's personal guard (a plot point that goes absolutely nowhere). The remainder of the film is taken up by fight after fight after fight, in which the bad guys are killed off one by one, finally culminating in Bruce forcing the reluctant king to send him back to the world of the living, which the king does by drop-kicking him and sending him flying off into the distance as the newly-liberated denizens of purgatory cheer their thanks.

THE DRAGON LIVES AGAIN is balls-out insane from start to finish and this review doesn't even begin to communicate just how out of its mind the film actually is. It's low-budget to the nth degree, features one of the worst/best dubbed voice tracks on record, contains wall-to-wall fight scenes that look like they were choreographed by an eight-year-old, includes a surprising amount of nudity and sex for this kind of flick (which is what earned the film its R-rating), and is packed to the rafters with so much outright silliness and utter stupidity that I had a huge grin plastered across my face for most of its running time. Unlike many cheapjack kung fu films from its era, especially those found in the annals of Brucesploitation, the film is not dull for even two minutes and its loony, surreal cartoonishness moves along at a breakneck pace that suggests the filmmakers didn't want to allow viewers any time in which to actually contemplate just what kind of madness was unspooling upon the screen. No lie, THE DRAGON LIVES AGAIN gets my HIGHEST RECOMMENDATION as a must-see masterpiece of bad cinema, and if anyone knows where I can find a better print of it than the one included in the ULTIMATE DRAGON COLLECTION 10-film Brucesploitation set, please do not hesitate to tell me where I can find one.
Posted by Bunche (pop culture ronin) at Tuesday, November 29, 2011