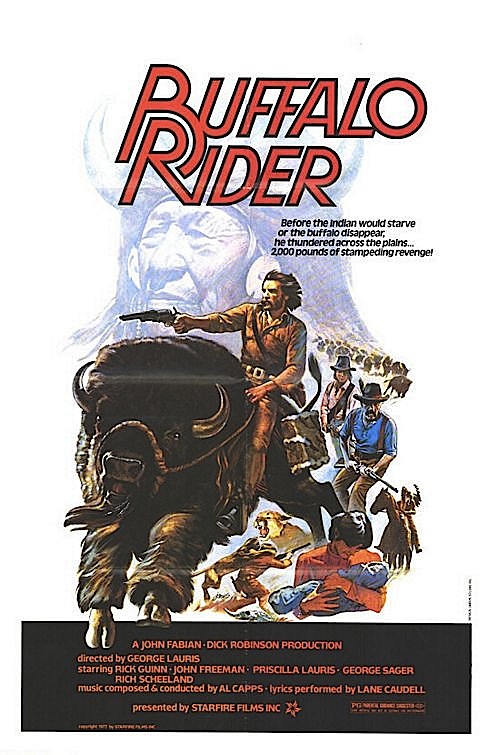 If you’re of a certain age — specifically, a middle-aged American whose childhood/adolescence occurred between roughly 1973 through 1980 — you are likely to recall the spate of cheapjack "family" films featuring some random white dude or family of white folks, either in the past or the then-present, who lived in the woods or on the prairie with a legion of animal friends from assorted species. Those flicks did decent box office and were mostly marketed as children's matinee fodder, and god knows I saw several of them, most notably BROTHER OF THE WIND (1973), THE LIFE AND TIMES OF GRIZZLY ADAMS (1974) and THE ADVENTURES OF THE WILDERNESS FAMILY (1975). However, despite my regular attendance at Saturday afternoon movie matinees, one of that brief period's films that I never heard of until about a week ago is 1978's BUFFALO RIDER, and if I'd seen its trailer at the time, I would likely have gone to see it. I mean, just look at this:

A feature-length exercise in padding out a movie’s running time as much as possible, the film opens with an eight-minute “In Search Of…”-style history of the decline in the once-voluminous buffalo population and confusingly alternates between narration from some unidentified individual who claims to have heard the movie’s details from his grandfather, and the grizzled tones of a secondary narrator who is apparently meant to represent the common buffalo hunter (it’s never actually made clear). Tons of nature/animal footage unspools as the audience is filled in on the year 1871 seeing a new tanning process that made buffalo hide as easily rendered into numerous products as simple cowhide, thus escalating the already ruinous and wasteful efforts of sleazy buffalo hunters who skinned the beasts and left their carcasses to rot, leading to the tragic and staggering figure of some forty-million buffalo being slain between 1871 and 1875. This sequence also introduces us to a trio of scurvy buffalo hunters who serve as the flimsy story’s villains, and these guys would easily fit in as the standard unwashed human vermin common to Spaghetti Westerns and certain Sam Peckinpah horse operas, but more on them later.

According to the narrator, Jake Jones, the titular character, was (apparently) a thoughtful and silent former buffalo hunter who sickened of the slaughter and left to live as a buckskin-clad mountain man in the wilderness of Utah and Wyoming, until the Fall of 1881, when he encountered a baby buffalo whose mother had been killed by some scumbag hunters and was under attack by a pack of hungry coyotes. Jake and the buffalo fight off the coyotes and Jake decides to care for the orphaned calf, rather than let it fall victim to the assorted predators in the area (this despite Jake clearly having been established as one of those hardcore crunchy, bearded at-one-with-nature types). Deciding he would have to care for the buffalo until its wounds healed, Jake immediately ties up the poor beast and embarks on a long period of breaking the wild buffalo in a homemade corral. Despite already having a totally serviceable horse, Jake soon chucks a saddle on the buffalo — which eventually grows into a 2000-pound behemoth named Samson (a name the narrator oh-so-helpfully reminds us is “from the Bible”) — and learns to ride the clearly-unwilling shaggy bulldozer in a lengthy, slo-mo-accented sequence replete with “stirring” ‘70’s faux-frontier music and the frequently repeated and awful theme song, a tune that evokes ‘70’s-era TV commercials for pickup trucks and beer, and the lyrics of which bestow upon Jake the heroic nickname of “Buffalo Jones,” thus cementing him as a legend or something.

Once man and beast forge themselves into a clumsy team, the wafer-thin plot finally gets underway. In fact, calling it a plot is something of an overstatement since what we really get is mostly a series of sporadic events, punctuated with footage of animals that are meant to make the film’s kiddie audience “ooh” and “aah” at the wonders of nature, and counterpointed with occasional looks at the douchebaggery of the bad guy buffalo hunters. Said douchey hunters encounter Buffalo Jones when they try to kill his horned mount and end up shooting Jones in the process. Samson runs away from the hunter with Jones on his back and the pair stumble upon the conveniently-located home of another mountain man/minor-league gold-panner and his wife, who nurse Jones back to health and welcome him into their household. From there, the highlights (?) include:
After all that filler, the plot kinda/sorta begins to go somewhere when the mountain man’s wife mentions her brother, his wife and their infant son are on their way to visit, at which point all that time wasted with the buffalo hunters finally serves a purpose. The hunters bushwack the innocent family, killing the adults and leaving the baby untended on the ground as they ransack the covered wagon for anything they can find, after which they head into the nearest town to trade what they’ve stolen for booze and other assorted frontier distractions. When the family does not arrive on time, Buffalo Jones hops on Samson for the first bit of actual buffalo riding in quite a while, and goes in search of the missing relatives (opting to ride Samson instead of a much swifter and more efficient mount, such as, oh, a horse). It takes Buffalo Jones four days to come across the dead couple and the pillaged wagon, where he finds the baby — who has miraculously held on for all that time without food, water, or a change of diapers, plus to say nothing of somehow managing not to be devoured by the local predators — and clues that incriminate the hunters who had earlier attempted to kill him. But vengeance must wait as the next twenty minutes of screen time are padded with Buffalo Jones’ four-day efforts to make it back to his mountain man friend’s shack, a journey including fending off hungry wolves, getting into a slo-mo fistfight with another cougar, a quick look-in on the squabbling hunters, tons of footage of Samson’s bulk providing difficulty in his making his way through deep snow, riveting close-up footage of Buffalo Jones reloading his pistol, Samson acting as a babysitter, Jones and Samson battling their way across a river’s strong current and, my personal favorite image, Buffalo Jones grabbing a big porcupine by its tail and making off with it so he can make a broth from its meat to feed the starving baby.

After dropping the baby off with the mountain couple, Buffalo Jones rides off on Samson in search of the killers, but first he runs into more film-padding in the form of a pack of wolves who want to eat him and Samson. (Jones does not simply whip out his gun and shoot the wolves because that would be douchey and against nature, something that forcing a buffalo to let him ride it obviously is not.) The hunters have split up, so Buffalo Jones tracks two of them to a saloon where, in the film’s most visually-outrageous moment, Jones rides his buffalo into the place and blazes away with his revolver, executing the two hunters and confusing the living shit out of the assorted drunken prospectors and mountain men in attendance. The remaining hunter is soon located and meets a deservedly horrible slo-mo end when he’s mercilessly trampled by Samson, while Buffalo Jones stoically drives the beastie. With justice served, Buffalo Jones and Samson ride off into the sunset and the narrator announces that the orphaned baby was his grandfather. That revelation was clearly meant to have a certain level of profundity but its desired effect merely elicits a dozy “And I care because…?” from the half-asleep audience.


BUFFALO RIDER is one very odd entry into its genre. Though ostensibly a family feature, the film is an uneasy fusion of the western, the ‘70’s post-hippie back-to-nature zeitgeist, and stoner entertainment that kind of floats from incident to incident in something akin to a dreamlike state. The virtually silent hero who rides a buffalo looks like a mythic figure straight out of a peyote-fueled mystic vision and the film’s whole vibe fairly reeks of good, skunky buds as inhaled in the back of a tricked-out van some thirty-plus years ago. If I still smoked weed, I’m betting this ultra-mellow oddity would not be half-bad to sit through while completely baked, but seen without illegal intoxicants its flaws are glaring. For a movie containing supposedly family-acceptable violence of both the human and animal varieties, it’s not at all exciting, and its story particulars at times feel as though they were communicated by a child randomly dropping building blocks into place and hoping the narrative makes sense and flows naturally. It's worth a look for western completists, but I most strongly recommend it for insomniacs who may find its meager charms a soothing lead-in to solidly nodding off.
Posted by Bunche (pop culture ronin) at Friday, February 24, 2012

I wonder what happened to him??? I LOve this!!

uhh dude is rider a mother fucking buffalo what gives asshole? your a giant doucher........ bitch

Michael, it's cogent comments like yours that make life worth living.

You spineless, whiners who have never created anything.....sit in the safety of your smelly little apartments complaining about a movie like this, which you watched all the way through apparently so you could savor your righteous complaining.
You self-appointed film critics complain without any reference points. Without any life experiences or contributions of your own you prove the we are devolving rapidly as a species. This film was created without CG, lighting and special effects or high range zoom on rough terrain not a sterile movie set. If you considered the era, the context and the effort to tell a story like this about a real person who actually did work hard to save the American Bison you would be impressed with this story.
Go create something of your own, seriously, grab you Iphone and some editing software and create a three minute short....and post it here for the world to watch and criticize.....then you will earn the right to sit home on the couch "baked" while complaining about other peoples work...that you enjoyed enough to watch all the way through because your meaningless life, void of contribution, allows you the luxury of slinging mud without adding any value to the world.