Thor the German Shepherd: this is the face of a true-blue hero.

A few years back, as the TWILIGHT juggernaut rolled on and perpetuated the whole pussified vampires thing, I once more took solace in the werewolf movie genre and got my hands on a copy of BAD MOON, a flick I'd heard of but ignored for a number of reasons. One of those reasons was its rep as yet another of the many low-budget throwaways in the genre, and if there's one thing I should have learned by now it's that you cannot judge a horror movie's quality by it budget or relative lack thereof. The original NIGHT OF THE LIVING DEAD cost about fifteen bucks to make, even almost fifty years ago, and now it's a bona fide classic. Same for the original THE TEXAS CHAIN SAW MASSACRE. Though not quite within the realm of those exalted landmarks, BAD MOON is a minor gem that does something different with the hoary conventions of the cinematic werewolf yarn.

The film is based on the 1992 novel THOR, by Wayne Smith, a story told from the point of view of the titular faithful German Shepherd who lives with a family of humans that he understandably considers his "pack." In the hierarchy of the pack Thor functions as the very capable protector, and his natural abilities are put to the test when a relative, Uncle Ted, comes to visit the family and only Thor, thanks to his animal senses and intuition, realizes that the guy is a werewolf. I have not yet read the book (I ordered it from Amazon and will review it once I've finished with it), but the movie apparently follows the book's plot basics, only losing the family's husband/dad and two of the kids, leaving Thor to look out for a single mother (Mariel Hemingway), and her young son (Mason Gamble, the kid from the horrid DENNIS THE MENACE movie). Thor proves his worth as a guardian early on, when a con man tries to fleece money out of the mother by provoking Thor to attack him, unaware that the woman is a lawyer who has prosecuted dozens of would-be hustlers just like him, and from that incident onward the audience knows to trust Thor's instincts.

After an expedition to a foreign land where his colleague/girlfriend is savagely killed by a werewolf and he himself is stricken with the curse of lycanthropy while trying to save her, Uncle Ted (Michael Paré) returns to the States and embarks on a quest to find a cure for what has befallen him. Unfortunately, all avenues prove a dead end and Ted moves into a trailer somewhere in the deep backwoods of the Northwest, where his homicidal lunar activities will stand less of a chance of getting out of hand (a plan that doesn't work because his transformations are nightly and he's wracked up a body count of five before the plot even really gets rolling). When he invites his sister and nephew up to visit (with Thor along for the ride), Ted gets it into his head that the company of his family may be just the thing that will curb his rapacious supernatural urges. It is during this daytime visit that Thor is allowed to sniff about freely in the woods, where he picks up strange scents and the remains of a forest surveyor, a trail that leads right back to Uncle Ted. Thor may not be able to articulate what he senses, but he knows Uncle Ted is something very, very dangerous, and from that moment on he holds the man under very close scrutiny.

Creepy Uncle Ted, now a werewolf and safely ensconced within the bosom of his family...

...which puts him within Thor's territory of guardianship, and Thor knows EXACTLY what's up. And he doesn't like it one bit.

Following his latest murder and with the police investigating literally right outside his trailer door, Ted calls his sister and asks if he can stay with her for a while. Once he parks his trailer outside the family home, Thor immediately sets up a vigil to keep an eye on the lupine visitor. Ted, very much aware that Thor has his number, creepily tries to insinuate himself into a position of power within the pack while going out nightly to chain himself to a tree as his transformed self rages without causing harm to anyone.

Thor witnesses the chained werewolf and has his worst fears realized, returning to the house and pissing on Uncle Ted's camper as a territorial warning. From that moment, you had better believe it's on, and in no time Thor's seemingly vicious and totally mis-interpreted aggression toward Ted lands him in the pound, leaving his pack very much in harm's way. But never underestimate the power of a boy's love for his dog, or the dog's love of his humans...

The film's low budget is certainly evident, but the story more than makes up for any deficiencies in the department of production values. The movie even has a werewolf that's much better than expected, although the transformation sequence is somewhat-justly maligned. Though low on gore (at least by my standards), the film is a lot of fun thanks to its unusual protagonist and if you're a dog-lover like me, you will root for Thor like you haven't rooted for a hero since Indiana Jones went after the Ark of the Covenant. Played by a pooch named Primo, Thor is a canine hero to be reckoned with and he even takes on the werewolf — a goddamned WEREWOLF!!! — twice, in what can only be called savage, animalistic combat. When stacked up against Thor, Rin Tin Tin, Lassie and Benji are a bunch of pussies and they can each suck it.

If not for a wholly unnecessary sex scene at the film's very beginning, I would recommend this as suitable for all ages, provided the kiddies can take scares that are mild by adult standards. This really is the heroic dog story taken in a different direction and as such it has the potential for great cross-audience appeal. BAD MOON awaits re-discovery and I suggest that you give it a chance. RECOMMENDED. 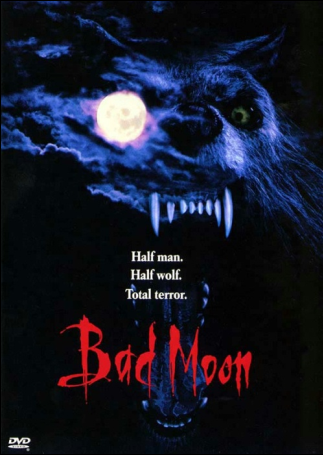