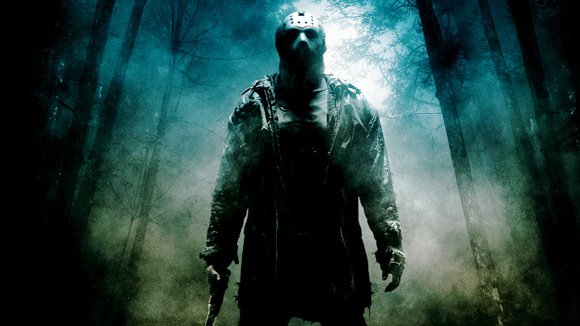 It's funny, but just by existing this reboot of the quintessential slasher movie series is automatically far superior to its predecessors, but that's not really saying much.

The never-ending FRIDAY THE 13TH series had its occasional moments, but overall the lot of them were amateurishly made, substituted mostly-tepid gore for actual scares, starred no one of note — unless you count Corey Feldman, so that alone speaks for itself — and repeated almost the exact same "story" in each of its installments, so there was no reason to expect a series relaunch to vary the tried-and-true formula in any significant way. Not surprisingly, the filmmakers did not alter the template that much, but the film does offer a greater degree of cinematic competence than any previous FRIDAY THE 13TH flick, so at least that's a start. But even with that in mind, a FRIDAY THE 13TH movie is more or less review-proof since those who dig them will see them anyway, no matter how much the critics may warn them off, but any film reviewer (or fan, for that matter) who goes to one of these expecting Kurosawa is a fucking idiot.

Since its inception in the summer of 1980, the FRIDAY THE 13TH template has gone a little something like this: a pack of horny/drunk teenagers go to the secluded woodland site of Camp Crystal Lake for a number of perfunctory reasons, always resulting in their gory deaths at the hands of unkillable, silent and murderous juggernaut in a hockey mask Jason Voorhees (or in the case of the first movie, his insane mother). Other than the possible involvement of local yokels, hick cops, cheesy 3-D effects, an outer space setting or Freddy Kreuger, that's all you need to know. It's the classic campfire story about a mad slasher and his escalating body count brought to the screen ad infinitum, so here are the pertinent facts about the new version: 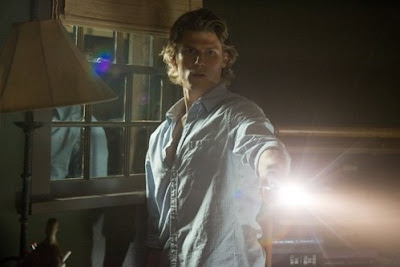 Julinna Guill loses that annoying top. I know her jubblies might look slightly too gravity-defying here, but when she leans over there is no doubt in my mind as to their all-natural status.
The DVD's extras are nothing to write home about but the "making of" documentary proves the entire cast and crew were game and totally aware of exactly what movie they were making, treating it as a lark and not taking themselves too seriously. The deleted scenes are best given a miss since they were deleted for a reason, and as a whole I'd say the DVD was merely passable if not for the novelty of actually seeing one of these movies made by people who genuinely set out to make something good and not just another cash-in/"re-imagining." Not that it turned out all that much different from what came before and "if it ain't broke, don't fix it" and all that, but they certainly get points for not turning out a piece of outright shit.

The last point I'd like to make about this and damned near every other FRIDAY THE 13TH flick is that they are best enjoyed with an audience. Even if the film itself is kinda lame, it can still be enjoyed when seen with people who are easily scared or with moviegoers who are into "audience participation" (aka most inner-city audiences), so in the case of this particular entry I suggest watching it with a roomful of friends and a handy abundance of liquor or illegal pharmaceuticals.
Posted by Bunche (pop culture ronin) at Sunday, October 23, 2016