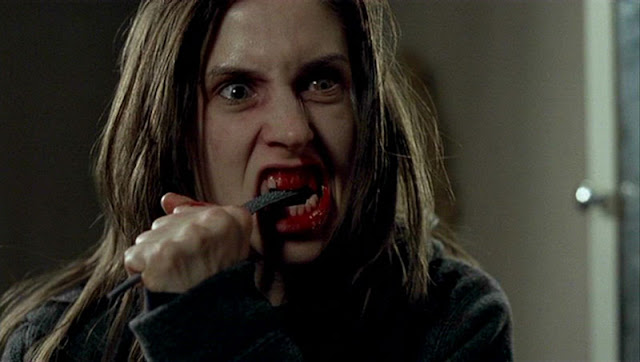 Filing down one's werewolf teeth is a stone-cold bitch.

Picking up shortly after the events of the first film, we find Brigette Fitzgerald (Emily Perkins) living  in a cheap Canadian hotel, where she staves off the symptoms of her lycanthropic curse with injections of monkshood (aka wolfsbane, the presumed cure found in the previous installment) while keeping a journal on her progress with her condition. The monkshood is losing its efficacy and while regularly attempting suicide by slashing her wrists, her werewolf-style healing factor shows clear evidence of growing stronger by the day. Her dead werewolf sister, Ginger (Catherine Isabelle), appears to her as an apparition, trying to offer a measure of comfort while pointing out the fact that the monkshood is not the cure it was presumed to be and it's only a matter of time until the wolf wins out. Ginger also notes that a male werewolf who has apparently been stalking Brigette has caught up with her...

Brigette haunts the local library and studies up on aspects of her condition during late-night hours when other members are gone, and her serial presence attracts the attentions of a young librarian who feebly attempts to put the moves on her and is rebuffed. He tracks her back to her hotel room and finds her in the midst of suffering an anaphylactic reaction to having shot up too much monkshood within one day, and as he attempts to drive her to get medical help, he is attacked and killed by the aforementioned male werewolf. Brigette escapes but loses consciousness, only to awaken and find herself in a psychiatric lockdown's female wing. Held against her will under the assumption that she's an addict (due to the telltale injection marks on her arms) and denied monkshood, Brigitte's wolfish traits begin to accelerate and she realizes it's only a matter of time until she turns supernaturally murderous and begins killing the staff and her fellow inmates. 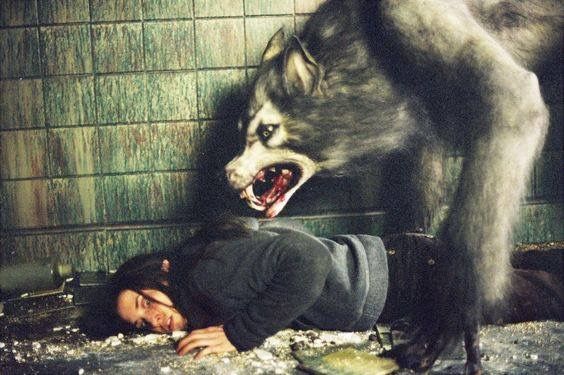 There are few scenarios worse than when a sexed-up werewolf wants to mate with you.

Befriended by Ghost (Tatiana Maslany), a creepy horror comics fan who figures out her secret, Brigette must navigate the unstable girls she's trapped amongst while dealing with the unwanted attentions of Tyler (Eric Johnson), a power-tripping hospital staffer who extorts sexual favors from the girls in exchange for providing them with the drugs they're supposed to be detoxing from. And as if all of that wasn't bad enough, her lupine stalker has followed her to the hospital with mating on his mind, so Brigette must escape in order to save herself and every other human in the place, and yet her own wolfish side fights to break free...

Considering the high quality of the original GINGER SNAPS (2000), any sequel that followed would have a hell of a lot to live up to. While not in the same league as its predecessor, GINGER SNAPS 2: UNLEASHED is pretty solid, as sequels go, and it's a tight little thriller in its own right. Though not as focused on the specifically female aspects of the lycanthropic experience as the first chapter, the sequel does return to the allegory of burgeoning female sexuality while melding its pubertal torments with the tropes of psychiatric hospital horror.  The tight script is bolstered by great performances from the entire cast, with the standouts being Emily Perkins, reprising her role as the tortured Brigette, and Tatiana Maslany as Ghost, one of the creepiest kids to grace a horror movie in ages. 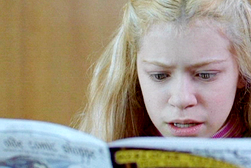 Though it received a theatrical release in its native Canada, GINGER SNAPS 2: UNLEASHED was released direct to video in the United States and I would like to know why. Like I said, it's a good flick, and there's no reason for it not to have been shown on the big screen here while shitty horror sequels are cranked out and projected at multiplexes nationwide multiple times per year. Once again, the werewolf gets the shaft... 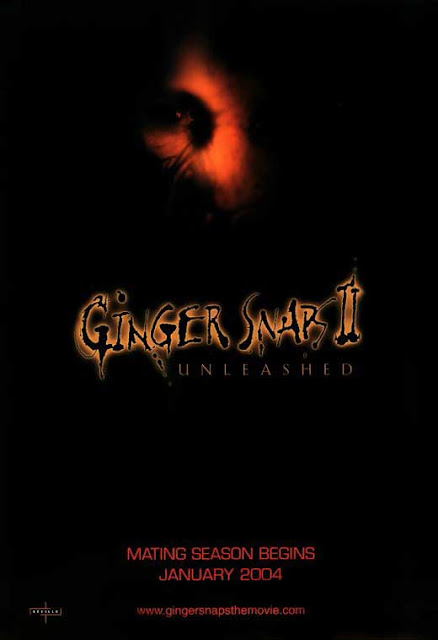