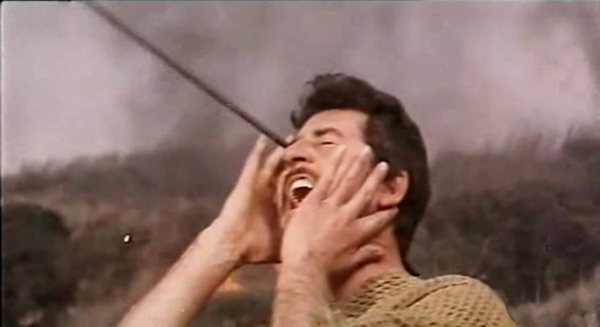 Now, this is how you kick off a movie!

A band of marauders raid and destroy a seaside village, killing all the men and abducting all the women. The guys are such bastards that once at sea and making their way back to their home island, they throw all of the old women overboard as food for sharks, but they also take random samples of the captive girls' blood to feed to their unseen master. Unfortunately for the marauders, the village they destroyed was home to Goliath (former Tarzan and beefcake legend Gordon Scott) and one of the nubile abductees is Goliath's betrothed, so it's off to the raiders' homeland for some righteous peplum-style ass-kicking. The marauders' homeland, Salmanak, is ostensibly run by a sultan, but he and his people are under the vile thrall of spectral vampire lord Kobrak, who is aided by the sultan's chief consort, Astra (Gianna Maria Canale). To rescue his beloved and the captive girls (who have been sold into slavery in Salmanak's slave market), Goliath must take on hordes of soldiers,  a hidden race of blue men, assorted cheapjack monsters,  a legion of the walking dead, and eventually Kobrak himself. Kobrak's master plan is to conquer the world by transplanting his mind into a duplicate of  Goliath's super-powered body and leading an army of mind-controlled super-slaves, but if you think Goliath's down with that mess, then you have never seen an old school "tits 'n' togas" actioner. 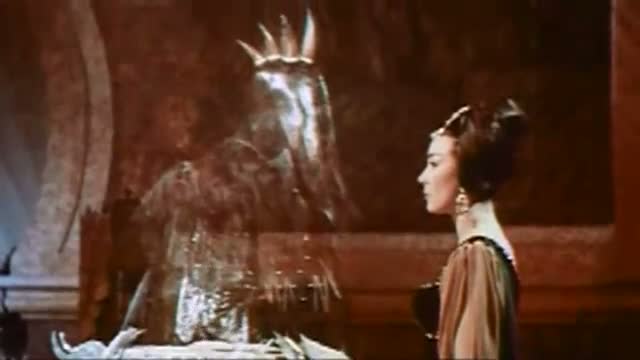 Originally one of the many Italian muscleman flicks of the 1960's to feature the all-purpose superhero Maciste, this entry was part of the peplum boom kicked off by the Steve Reeves Hercules films of the late-1950's, which proved to be unexpected international hits at the box office. The success of the Reeves Hercules flicks opened the door for a flood of cash-ins and knockoffs that would go on to glut the screen for close to a decade, with only a handful of the hundreds of films in the genre actually being any good. GOLIATH AND THE VAMPIRES, as it was retitled for its American release, is one of that handful, and it's a fun introduction to the genre for newcomers. While low on scares and totally suitable for younger viewers, it has enough sword & sorcery madness and cheesy monsters to make it worthwhile as an example of the genre's occasional fusion of mythic hero and horror tropes.

But while GOLIATH AND THE VAMPIRES is a decent representative of this section of the peplum genre, it's not the best of the classic-era peplum/horror hybrid, but we'll be getting to that soon... 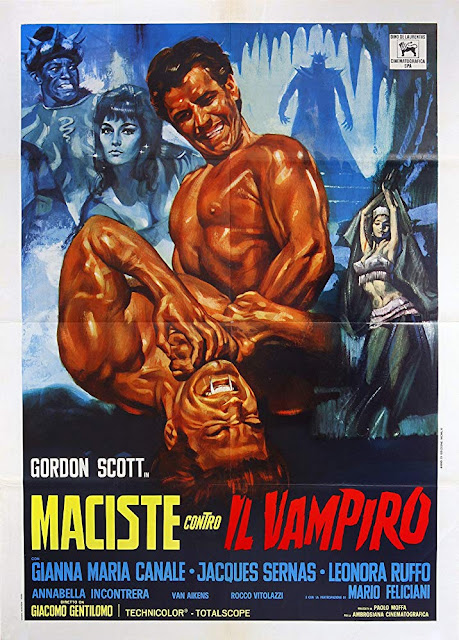 Poster for the Italian theatrical release. 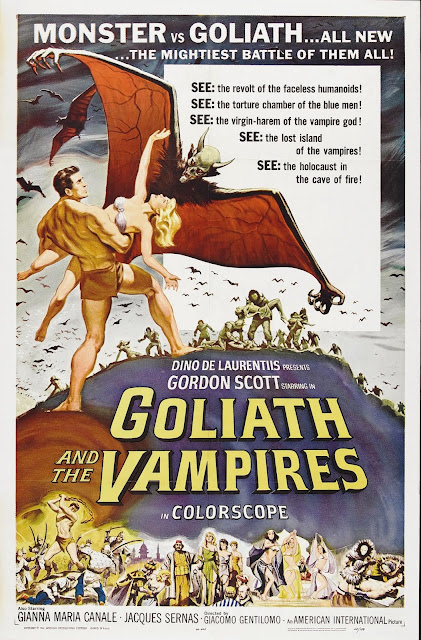