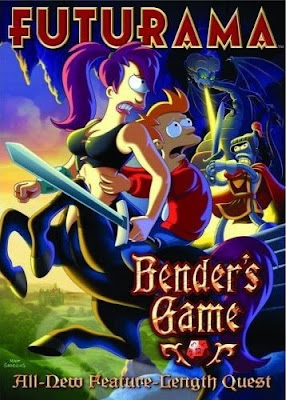 What does it say about a made-for-DVD FUTURAMA movie when the one thing in it that made me laugh out loud was an extra in which Bender's PSA against video and DVD piracy turns out to be an appeal in favor of such, as well as all other forms of thievery including grave-robbing?

This time around, the Planet Express gang must face rising dark matter fuel prices and discover the secret of the alleged shortage behind it while Bender's development of an imagination leads to not-surprisingly dire results, culminating in a journey to an alternate reality in which all of the characters are recast as Dungeons & Dragons fantasy role-playing types (except for Fry, for no explained reason). BENDER'S GAME is by no means bad and it does feature several amusing bits, but it kind of meandered about for far too long before arriving at the story's selling point, the fantasy parody (written and performed by a cadre of hardcore geeks who know exactly what they're making fun of), and by the time the plot got to that stuff it was too little too late. The fuel-shortage plot could have worked well enough in another story, I suppose, but it hogs up the majority of the first two thirds, only occasionally breaking to set up the journey into fantasy with Bender's loss of his grip on reality and full-blown descent into madness (landing him, straight-jacketed, in a padded cell at the HAL Institute for Criminally Insane Robots). There's also a damned-near-pointless demolition derby sequence early on that for the life of me I cannot determine the need for, and other than seeing a SPACE: 1999 Eagle and the severed heads of George Takei and Scott Bakula battling it out for crash-and-burn supremacy, it isn't really funny. Then there's the fantasy role-playing segment. It's amusing enough for what it is, but its LORD OF THE RINGS riffs come off as taking the easy road, which is especially grating because the writers of FUTURAMA are very creative and anything but lazy in what they do.

So BENDER'S GAME gets my vote as the weakest of the three made-for-DVD FUTURAMA flicks, and, as previously stated, while not terrible, if this is where the series would have gone had it not been cancelled, I would have given up on it long ago, even my love of Bender Rodriguez — the most original and truly entertaining robot personality since Robot on LOST IN SPACE, and he happened forty-three years ago! — giving way to ennui. There's one more of these DVDs scheduled, 2009's INTO THE WILD GREEN YONDER, and though the trailer looked somewhat promising, the same could be said about BENDER'S GAME and that one was just so-so, thus my expectations are minimal. I sincerely hope to be proven wrong because these creators are capable of far better, and it's about time they proved that again.
Posted by Bunche (pop culture ronin) at Monday, November 03, 2008