The Baroness strikes again! After unexpectedly getting two posts out of discussion of the G.I. JOE villain the Baroness, here comes another one. 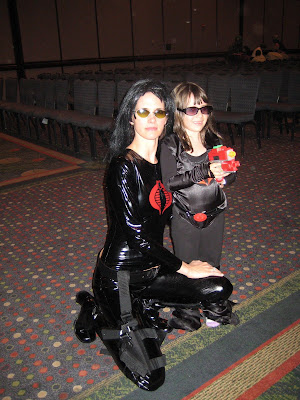 This was sent in by Larry Hama — the guy who developed the G.I. JOE: A REAL AMERICAN HERO characters in the first place — and was shot at a convention in Kansas City. A mother and daughter team, they did not win the costume contest, and according to Larry I don't want to know who did. (I'm betting it was the hated "Slave Leia.")
Posted by Bunche (pop culture ronin) at Sunday, August 16, 2009