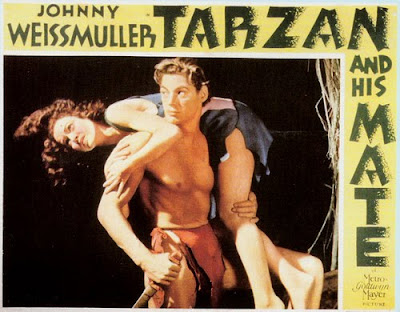 Well, I just got back from seeing TARZAN AND HIS MATE projected at the Brooklyn Academy of Music (or BAM to us locals) with my former roommate and good pal Jessica, and seeing it on the relatively big screen only brought home just how terrific the film is as an example of Golden Age Hollywood entertainment. It's crammed to the gills with enough sex and violence to make it one of the most often-cited flicks that led to the implementation of the Hays Code, the self-censorship commandments that effectively neutered Hollywood films until roughly the 1960's (when the MPAA eventually took over, but that's another story entirely). I love TARZAN AND HIS MATE without reservation so this was a big treat for me — despite the print missing the famous nude swim sequence — and it was a lot of fun to see Jessica, a sweet relative innocent when it comes to certain forms of entertainment, find herself both utterly enthralled and absolutely appalled at the film's ragingly politically incorrect content. She gasped aloud at the savagery, thrilled at Tarzan's mastery of his environment, and was charmed by his tender relationship with the totally "gone native" Jane.

So if it turns up in a film series near you, please do yourself the favor and check out TARZAN AND HIS MATE projected. The absence of the nude swim scene was annoying, but it's on the DVD so at least it's not lost, and the rest of the movie's sheer entertainment value more than makes up for it. In fact, I'm guaranteed to have pleasant dreams tonight, wherein I'm a strapping jungle-lord with the coolest girl in the world at my side. Good stuff.
Posted by Bunche (pop culture ronin) at Sunday, October 11, 2009