Early on Thursday morning my friend and former-roommate Jessica sent me the following email:

Subject: Help with an assignment I just got?

Hey, you know how my new thing is complaining about the weird stuff I write for the blog internship? Well today I pitched a spin on how Disney is re-imagining Mickey Mouse. Now I have to come up with Melrose Place-style speculations about re-imagined stories and personalities for Minnie, Daisy, and Goofy. Any thoughts?

I responded moments later as follows:

Are you kidding? This one writes itself! Allow me to demonstrate: 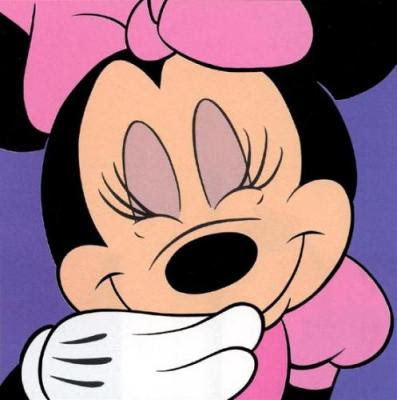 Bubbly and cute on the surface, Minnie is in actuality a roiling cauldron of resentment over having been assigned the role of personality-void love interest to her limelight-hogging boyfriend for just over eighty years. Smart, talented in a variety of fields that she never gets to showcase and fueled by deep-rooted anger, Minnie is ready to explode and has sought and found genuine emotional/sexual fulfillment in her secret trysts with the seemingly-retarded Goofy. 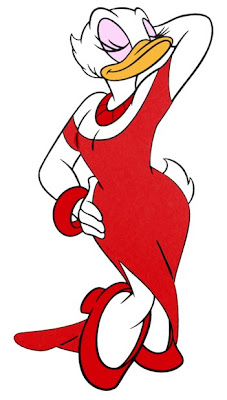 Also trapped in her role as the distaff counterpart to her man, Daisy's position is more emotionally precarious than Minnie's because of Donald's un-medicated and out-of-control bipolar disorder. After decades of dealing with him, Daisy is skilled in weathering Donald's insensate rages but is weary of constantly trying to put a humorous spin on his tantrums by acting as his "straight man" for the sake of the studio's merchandising efforts and her and Donald's careers. Though never physically abused by Donald, psychologically Daisy is the classic battered wife who puts on a public face of the contented and devoted other half, a masquerade whose facade is beginning to reveal cracks... 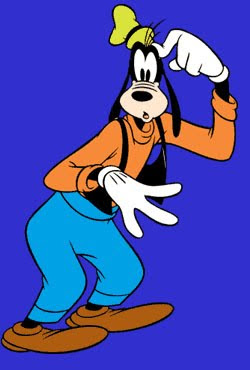 Long perceived as little more than a functional retard with a masochistic interest in dangerous sports (see his short films to get what I'm referencing), Goofy is in actuality the Disney gang's secret stud, sort of a cartoon hot black engine of unbridled lust who's the forbidden sexual fruit of the studio. 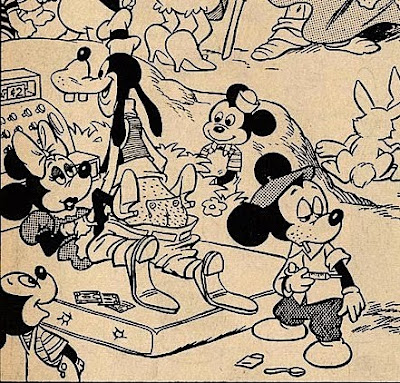 Minnie secretly succumbed to his uber-masculine charms long ago but cannot publicly acknowledge their illicit affair for fear of harming her lucrative career and possibly jeopardizing the Disney gang's already dwindling marketability in an age that no longer finds their treacly-wholesome antics relevant to popular culture, but Goofy carries on regardless, rocking not only Minnie's world but also sampling the fleshly delights of farm girl Clarabelle Cow, bosomy operatic diva Clara Cluck, heiress house cat Duchess, and brazenly crossing the line separating anthropomorphized cartoon animals and the straight-up human 'toons such as Cinderella, Snow White, Princess Aurora (aka Sleeping Beauty) and the rest of the Disney princess stable, giving them inspiration for all those happy songs they sing about their dream-men (you didn't really think those songs were about that gaggle of fags we've seen those girls allegedly pining for, did you?). Comfortable and adventurous in his sexuality, Goofy even spreads the love among the "mature" Disney "bad girls," providing the real reason for the sly and knowing smiles seen on the faces of Ursula, Cruella DeVille, Maleficent, and even Cinderella's stepmother and wicked step-sisters. But sooner or later all good things must come to an end and it's only a matter of time before Goofy finds himself caught up in a maelstrom of jealousy, possible severe ass-kickings from his mistresses and their cuckolded spouses, and dozens of paternity suits over his growing brood of bizarre-looking bastard offspring.

Jessica's take on the re-imagining of Disney characters can be found here.
Posted by Bunche (pop culture ronin) at Saturday, November 07, 2009

I recall seeing a poster of Wood's "Disney Memorial" back in the mid-1970s in the music section of a store where my family used to shop. Until you had posted a link to it a few years back, I had been wondering if I'd just imagined the (literally) fucking thing.