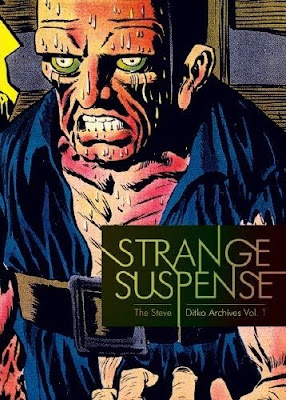 Last week was a fucking shitstorm for Yer Bunche for a number of reasons and there was very little going on that could shake me from my negative mental state, but then PUBLISHERS WEEKLY came to the unexpected rescue by assigning me STRANGE SUSPENSE: THE STEVE DITKO ARCHIVES VOL. 1 to review.

Anyone who's familiar with American comics of the past fifty years knows the name of Steve Ditko, primarily as the co-creator of Doctor Strange and Spider-Man, and his quirkily eerie style is instantly recognizable to those in the know. As a kid I did not like Ditko's work and wrote him off as a purveyor of stilted and over-wrought figures and strange visual storytelling that I in my nine-year-old wisdom considered "amateurish." That opinion held firm until sometime during my high school years when I was able to get my hands on a near-complete run of Ditko's Doctor Strange work in STRANGE TALES and had my erroneous perceptions completely kicked to the curb. While I had been a Doctor Strange fan since discovering the character on a children's album in 1972 and had read many comics involving his other-dimensional exploits, I had never read any of Ditko's stories other than the short first appearance in STRANGE TALES #110 (1963) and the origin story from STRANGE TALES #115 (1963), both of which were reprinted in ORIGINS OF MARVEL COMICS (1974), a collection of 1960's-era origin stories that was at the time like the bible for the beginner comic book fan. 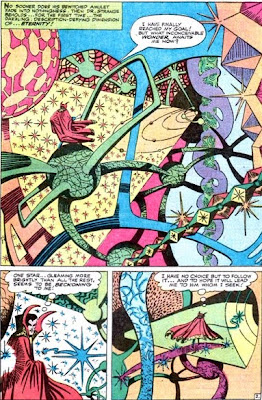 While unarguably more renowned for his work on Spider-Man, Ditko's Doctor Strange more than lived up to its hero's name with weird extra-dimensional planes that looked like what could have been M.C. Escher's first foray into Owsley Stanley territory, mystical spells manifesting in gel-like tendrils from the oddly-gesturing digits of master sorcerers, and cosmic beings defying description (Eternity, anyone?). Simply put, there was nothing else like it in comics at the time, with the possible exception of Jack Kirby's experiments with collage in FANTASTIC FOUR and THE MIGHTY THOR. No one since has been able to do the character and the strip's visual concepts justice (although Marshall Rogers came close) and such a unique stylistic voice had to come from somewhere, but what could have possibly have served as Ditko's training ground? The answers to that bit of four-color archaeology can be had by reading STRANGE SUSPENSE: THE STEVE DITKO ARCHIVES VOL. 1 from cover to cover, and in obtaining those answers I was enlightened in a big way.

Upon considering the pieces found in this volume it becomes apparent that the Steve Ditko of the early 1950's was working within stylistic areas that were common to comics of the time, namely a conventional look and feel, only with a dash of the quality found in the E.C. stable. These pre-Comics Code stories barely resemble the Ditko of the Marvel years and in fact reveal a young cartoonist who had yet to unlearn conventional visual storytelling and allow his unique artistic voice full reign, and that is in no way a bad thing. Ditko lends his talents to stories covering the horror, crime, romance, Western and sci-fi genres, turning in compelling work with each entry and surprising those familiar with his later work by offering up detail-heavy yarns with zero trace of his trademark psychedelia and figures seemingly wracked with rheumatoid arthritis (although his signature nervous-looking and twitchy facial expressions are all over the place). I was particularly shocked at how "Paper Romance" proved he could not only turn out a very well done romance yarn, but also by how much the figures in certain instances resembled the work of Russ Manning and Will Eisner, both comics artists whose work I hold in the highest esteem.

STRANGE SUSPENSE: THE STEVE DITKO ARCHIVES VOL. 1 is worth adding to one's comics bookshelf for many reasons, but here are the standout stories that utterly sold me on the whole shebang:
That's just a sample of the interesting things to be found between this collection's covers, so trust me when I tell you it's worth picking up, both for the seasoned fan and also for the newbie. Fun stuff! RECOMMENDED.
Posted by Bunche (pop culture ronin) at Wednesday, November 18, 2009

Oh, for the raw imagination of 50s-70s era comic storytelling! Although there's still some great shit coming out these days, it often feels like everything after the early-mid 1980s has been retreading the same old ground: slugfests, pointless shocktopia, or "ironic" piss-takes and "re-imaginings" of older material.

Where were these things printed originally? I looked at it on the shelf (money's tight, I had to pass) and couldn't find any credits - who wrote these things? where were they originally published? The indicia just credits Fantagraphics...

The stories range from 1953-1955 and the majority of them were published by Charlton.

You were right on about how kids seem to prefer that literality. I remember waiting for the comics version of 2001, and then being so disappointed by the Kirby version, because things were so quirky and weird. At the same time, I was a Big Daddy Roth and R. Crumb fan. You figure it out, I can't!

I just stumbled onto your site and I think it's terrific. I've been reading for a couple of hours. Thanks!