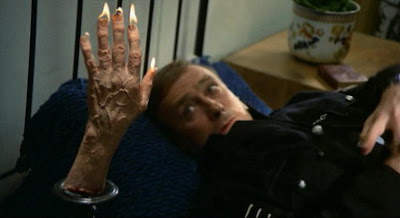 Edward Woodward as Sgt. Howie, one of cinema's bigtime losers.

Sergeant Howie: And what of the TRUE God? Whose glory, churches and monasteries have been built on these islands for generations past? Now sir, what of him?
Lord Summerisle (Christopher Lee): He's dead. Can't complain, had his chance and in modern parlance, blew it.

-from THE WICKER MAN (the good one, not that Nicholas cage bullshit)

Best known to Americans as THE EQUALIZER, British actor Edward Woodward has joined the Choir Invisible at the age of seventy-nine, and while THE EQUALIZER was okay '80's TV fodder, I will always remember Woodward as the ill-fated Sergeant Howie in 1973's superb THE WICKER MAN. Personally, I'd take death by pneumonia over what befell the Sergeant in that movie...
Posted by Bunche (pop culture ronin) at Monday, November 16, 2009

Having never seen The Wicker Man, the most indelible screen image of Edward Woodward is (for me) his portrayel of the title character in Breaker Morant.

One of his last roles was in the Simon Pegg comedy Hot Fuzz.