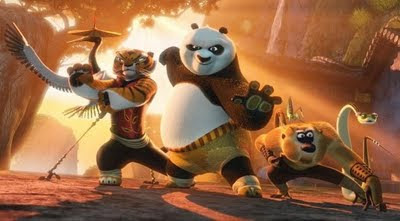 Has it really been three years since the first KUNG FU PANDA? I loved that film and I'm glad to say that the wait for the sequel was worth it, although the new installment is something of a step down from the first film's considerable charm and wit. The first film was an involving tale of a misfit's realization of his dreams of martial arts heroism, so where could the writers go with the character's story after he reached his goal?

This time around, it's long enough after the first story to find Po (Jack Black) firmly established as one of China's great martial heroes, perhaps even the greatest, and he and his colleagues — the Furious Five — defend the general public when not honing their skills with Master Shifu (Dustin Hoffman). But China's fate is threatened by the decades-long machinations of Lord Shen (Gary Oldman), an evil peacock who has developed cannons with which he seeks to conquer the country and eventually the world, and Shen's future defeat was predicted by a soothsayer (Michelle Yeoh) who stated his downfall will be brought about by "a warrior who is black and white." Thus forewarned, Shen launched a campaign of genocide against the panda population, a pogrom that led to the infant Po being the last survivor of his village and eventually being found and adopted by noodle chef duck Mr. Ping (James Hong). As Shen's wolf soldiers raid a village for metal to craft more cannons, Po and the Five come to the rescue and it is then that Po sees Shen's insignia, which triggers flashbacks to his mother seemingly abandoning him. Those visions lead Po to ask his adoptive father where he came from — after all, it is more than a bit odd that a panda would be the son of a duck — and his quest for that answer forms the compelling B-plot, with extra fuel added by Mr. Ping's deeply felt fears that Po getting those answers may lead to him losing the son he loves very much. So our hero and his colleagues must win the day against a vicious villain whose victory would literally signal the death of kung fu — the statement of which nearly elicited a sincere "Oh, HELL no!" from me in the theater, but I reigned it in for the sake of the kiddies — while Po wrestles with a genuine emotional crisis that could change his world forever. Unbeknownst to Po, the answer to all of the story's conflicts rests in taking to heart Master Shifu's serene lesson about striving to obtain inner peace...

I enjoyed KUNG FU PANDA 2 and I certainly recommend it, but it couldn't hold a candle to the original. It registered to me like one of the Shaw Brothers' somewhat-lesser sequels to one of their instant-classic wuxia flicks, and while that was not necessarily a bad thing, much of the movie magic found in the first film is missing here. The plot about Lord Shen and his use of firearms as a potential kung fu-ender was handled to classic effect in the Shaw Brothers film LEGENDARY WEAPONS OF CHINA (1982) and that much-better movie was all I could think about once that element was introduced in KUNG FU PANDA 2. (If you haven't heard of or seen LEGENDARY WEAPONS OF CHINA, please take my word for it and add it to your Netflix queue).

The plot involving Lord Shen was serviceable in a standard kung fu movie way, but for me the film's strongest element was the father/son stuff. I'm in my mid-forties and I'm still dealing with some heavy "daddy issues" that I've had since childhood, so that kind of stuff always hits me right in the heart, and I have to admit that tears rolled down my face when Mr. Ping told Po how the presence of his son had made his life all the better. That and when father and son embraced and told each other how they felt at the end. That scene would not leave my head on the bus ride home and I was on the verge of tears the whole time as I contemplated my own past and wondered what that kind of father/son mutual caring must feel like.

But enough of my weepery. The only "problem" with the story is that once Po's origin as a hero was over and done with (the first movie), it would be hard for the film to end up as much more than a rote sequel unless they could find some other angle, which is what they did with Po searching for where he came from. And I loved the touch where Po dejectedly explains his situation to his martial colleagues, stating that "Hardcores like you wouldn't understand," only to have Tigress unexpectedly and firmly give him a long, silent hug and state that he is wrong and that she does understand. That reaction is not explained in the movie, but its cause was related in moving detail in the straight-to-DVD film SECRETS OF THE FURIOUS FIVE (2008) and to those of us who saw it, that sequence in this sequel was a deep and heavy moment.

The returning characters are all fun and they each have a number of cool moments — Master Shifu's discussion of the value of finding inner peace, as accompanied by a stunning bit of animated "soft" kung fu, is of particular note — but I have to ask why do they keep paying Jackie Chan to voice Monkey when he only has perhaps three lines? That was the case in both films, but the simple fact of the matter is that literally anyone could have voiced the character and it would not change a damned thing.

If Tigress (voiced by Angelina Jolie) is coming for you, that's your ass.
Also like the first film, I was fascinated by Tigress (again voiced by Angelina Jolie). The very hardest of the Furious Five's hardcore warriors, Tigress, as you may remember from the first film, was the most likely candidate for the title of Dragon Warrior that the prophesied Po ended up bearing, and if you ask me she's still best suited for that role. In many ways the most perfect representation of the classical wuxia hero among the Five's ranks, totally focused, possessed of utter mastery of her body and skills and with her gender having no bearing on the story at all, Tigress could easily carry a straight and totally serious martial arts narrative on her own and that's exactly what I want to see by way of a spin-off film.To Dreamworks: More Tigress, please!

Lastly, I went to the theater intending to see the film in 2-D but the show I planned to attend was sold out, so I ended up seeing it in 3-D (and consequently paying an obscene $13.50 for that "privilege" at what is usually a bargain matinee). While the 3-D was very well done and, unlike some other recent 3-D efforts, the effect was not dark or murky, it was not in any way necessary to the overall enjoyment of the film and did not feature even one moment that really milked the effect. Instead it provided a very believable depth of field, but naught else. Save your hard-earned cash and stick with the 2-D version.

Those of you with kids who are reading this may be wondering about this film's violence quotient since it is, after all, a martial arts story, so allow me to reassure you and state that KUNG FU PANDA 2 is absolutely suitable for kids around five and up. It is not, however, suitable for the legion of infants in arms and toddlers that their mothers insisted on bringing to see it when I attended. It's not offensive or anything, but the plot does require an attention span that kids that young simply do not yet possess, and their loud, mostly pre-verbal exclamations really ruins the experience for other viewers, so I suggest waiting for DVD before showing it to the under-fives.

And speaking of the wee ones, the best talk-back to the screen during the showing I attended was supplied by a little black kid who could not have been more than four years old. When Po was wrestling with his yearning to find answers about his origins and mused to his father "Who am I?", the kid's voice said, at normal conversational volume and with utmost gravitas, "You're Kung Fu Panda, nigger!" Hearing that kind of language out of a kid so young is certainly appalling, but I swear it was fucking hilarious. 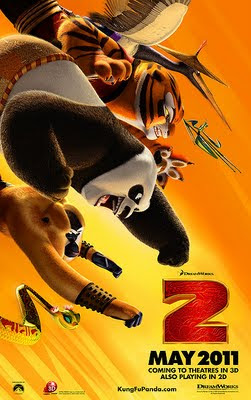 I may actually go see this now... after renting the first one.