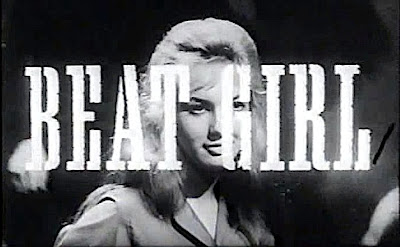 A classic example of early U.K. exploitation filmmaking, 1960's BEAT GIRL, aka WILD FOR KICKS, is a fascinating (if rather caricatured) time capsule of post-war England and its head-on collision with the newly-minted rock'n'roll youth culture. 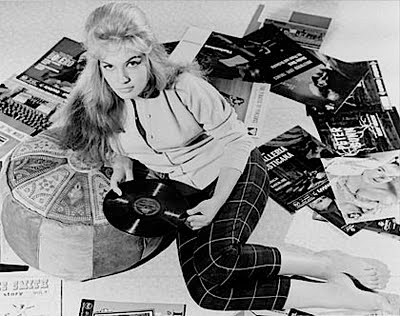 Gillian Hills as Jenny, a real rotter of girl who could use a good, swift kick in the box with a steel-toed Doc Marten.

It's bad enough that she's rude and generally nasty — in other words the total antithesis of what a nice British girl is supposed to be — but her sizable mean streak is aimed squarely at Nicole (Noelle Adam), the new 24-year-old French bride of her architect dad (David Farrar), a man who's too focused on designing the ultra-modern and sound-proofed "City 2000." When dad brings his newlywed Gallic sweetie home to his posh Soho house after being away from his daughter for five months, Jenny is not at all pleased to meet the woman who is taking the place of her presumably-dead mother (her mom's absence is never explained, but it's obvious that she's history), and from the instant they are introduced, Jenny is at all-out war with her step-mom. When not verbally abusing her step-mom, Jenny whiles away her time at the local "beatnik" club, the Off-Beat (which is located across the street from a seedy strip joint called Les Girls), with her cadre of too-cool-for-school chums, all of whom seem to have escaped from some mis-translated Anglo version of REBEL WITHOUT A CAUSE or a garden variety Elvis time-waster.

As the story (such as it is) progresses, the central point is Jenny's cruelty toward Nicole and her discovery of Nicole's past as a stripper and occasional prostitute in Paris, facts she uses to blackmail her stepmother into staying out of her life and stop trying to make friends with her. As it becomes clear that Nicole is determined to win both her favor and her respect — a losing battle if ever there was one — Jenny's rebellious intentions become further skewed upon investigating her step-mom's past association with a stripper named Greta (Delphi Lawrence), which brings her into direct contact with Kenny (Christopher Lee), the oily owner of Les Girls, who immediately sets his vile sights on the underage and not necessarily disinterested Jenny. All of this is interspersed with looks into Jenny's self-destructive social life, featuring "wild" dancing to "jive" music (in actuality that jazz/early guitar rock fusion common to Britain of the late-1950's), drunken speeding, Jenny and friends playing "chicken" by resting their heads on a train track as a speeding locomotive approaches, unauthorized house parties, stylistically-inaccurate Teddy Boys, wanton destruction of property, strip-teasing, and eventually murder, and it all entertains in that uneasy way found on U.K. sleaze flicks of the period, like HORRORS OF THE BLACK MUSEUM (1959) and the epochal PEEPING TOM (1950).

The rather risque striptease sequence edited from the U.S. release of BEAT GIRL.

Much like films that milked juvenile delinquency, hippies, bikers, black people and punks for exploitation fodder, BEAT GIRL does likewise with its late-1950's British "youth gone bad" and the results, though rather tame by today's standards, must have been a solid punch in the guts to its contemporary audience (or those among the audience who took it as an accurate representation of reality). With its ludicrous aping of American beatniks and their "hip" lingo, the film comes off as not unlike REEFER MADNESS for the British rock scene of the pre-Beatles era, especially in the scenes involving Jenny's friends, who are sort of led by the uber-douchey Adam Faith as Dave, the would-be rocker of the crew, and as such he's both tepid and kinda THUNDERBIRDS marionette-looking. 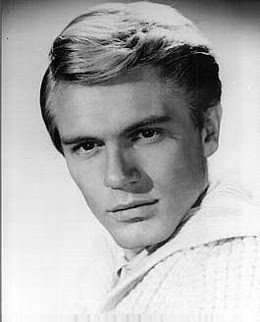 Adam Faith, part of the wave of post-Elvis/pre-Beatles U.K. rockers in the Cliff Richard and Tommy Steele mold. All that this guy's missing is a blue International Rescue flight suit and cap.

The thing that renders him so grating is his exaggerated attempts at laid-back "cool" that only make him come off as a dick who you just want to punch in the face as hard as you can. (It always brings a smile to my face when three Teds take his ever-present acoustic guitar and smash it to pieces as a challenge to fight, which he predictably pussies out of.)


Adam Faith's Dave in action, with a very young Oliver Reed as "Plaid Shirt" (which is how he's listed in the credits).

And as for Jenny, she's perfectly brought to vicious life by Gillian Hills, who enacts her with all sly looks, haughtiness and verbal abusiveness that makes one wonder how any of her friends can tolerate her at all. To the British of the time, her behavior must have been some pretty shocking stuff, what with a theoretically-"proper" upper class spawn like Jenny aggressively and stupidly chucking her father's wealth and position in favor of hanging out with unsavory types who directly prefigure the punks of the 1970's by a generation. Their look may be more proto-preppy than post-apocalyptic tribal, but the mindset is exactly the same, as is the self-pitying whining, only this time it's coming from a bunch of kids who were born during World War II and feel (incorrectly) that they have nothing to live for other than "kicks."

The thing that got me interested in this film in the first place was the early soundtrack work by John Barry, the guy whose music indelibly set the tone for the Connery-era James Bond films and one of my very favorite composers, for film or otherwise. I'd heard of the movie ages ago, but what steered me toward Barry's soundtrack for it was discovering the film's theme tune as covered by The Damned on the B-side to their 1986 12" single for their cover of "Eloise." (The Damned loved doing covers.) Upon hearing the tune I said to myself, "Holy fuck, that sounds like a John Barry tune from an early James Bond movie!" so I looked at the songwriting credit on the vinyl's label and, sure enough, there was Barry's name. I filed that bit of info away for future soundtrack hunting and eventually got my hands on the CD in the early-'90's, and the wait proved to be well worth it. I didn't see the film itself until sometime later, and it was then that I discovered that the album versions of the soundtrack's music were slicked-up re-recordings, but I didn't mind because all of it was one short evolutionary step away from the signature sound of '60's 007 music. Just check out the studio version of the title track and you'll see what I mean:


Now, is that or is that not pretty much a dry run for the whole Bondian musical aesthetic?

So I recommend BEAT GIRL as a curiosity for those interested in U.K. exploitation movies and most especially for those who are only familiar with John Barry's James Bond scores. Either way, it's a win for the viewer. Oh, and while doing a search of her filmography, I just found out where else I've seen Gillian Hills before: she's the blonde in the record store sequence in A CLOCKWORK ORANGE (1971). 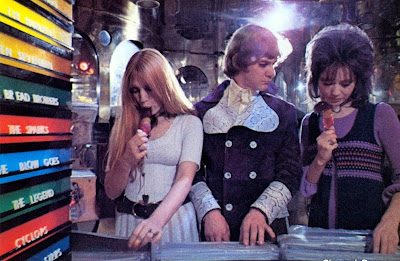 Gillian Hills (the blonde), still associating with savory characters in the classic A CLOCKWORK ORANGE (1971). 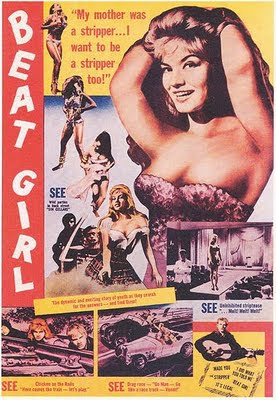 I did not realize women were even able to dance like that in the 1960s. There's so little evidence of it in commercial films and television.