MY JOURNEY THROUGH BATTLESTAR GALACTICA: BACK TO IT 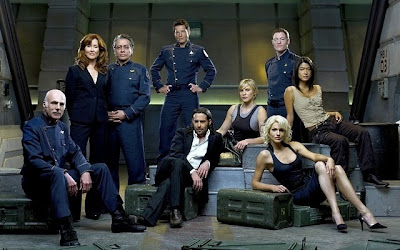 Since it appears that the current state of my year-long-plus job search has come to a grinding halt (the waiting game is a bitch), I think it's time that I finally got back to BATTLESTAR GALACTICA and finished the damned thing. I took a break of three full months and am now ready to fill my insomniac hours with something other than samurai films (narratively compelling, but usually very bleak and not conducive to a positive state of mind) or installments of MYSTERY SCIENCE THEATER 3000, so I'm jumping back in right where I left off, namely episode #60, "The Road Less Traveled." I just watched it — it's the one where Starbuck's seemingly insane command of the Demetrius and its mission to find Earth really begins to unravel — and after that one I have a total of fifteen episodes until I'm done. Depending on what else I may have going on or how much of this stuff I'm willing to sit through on a nightly basis for the next week or so, I'd say you can expect my final assessment in less than two weeks (time must be allowed in which to ponder and place those thoughts down on virtual paper). STAY TUNED.
Posted by Bunche (pop culture ronin) at Tuesday, May 31, 2011

Good luck on the job thing, my wife just hit two years sans job, but the place she's been temping at might finally get off their butt and offer her a real job soon.