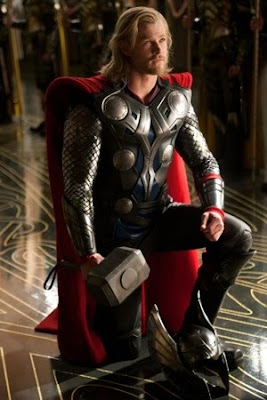 Marvel Comics' most badassed A-lister makes the transition to the live-action screen in the form of Chris Hemsworth.

When I was but a wee Bunche of about four years old, my first introduction to the Marvel Universe was daily airings of the 1966 THE MARVEL SUPERHEROES cartoon show, a (mostly) faithful assortment of adaptations of the adventures of Captain America, the Hulk, Iron Man, the Sub-Mariner, and the mighty Thor. To call that show's animation "limited" would be a gross understatement, but it was colorful, it looked just like the panels of a comic book (which only made sense because the images were static art straight from the comics, with minor details like a character's speaking mouth or pointing hand being crudely granted motion by the so-called animators), and it fired my developing imagination. I enjoyed the show as a whole, but my favorite segments were those telling stories about Prince Namor, aka the Sub-Mariner — a regal and nearly-naked Mr. Spock lookalike who ruled Atlantis and displayed an incredible arrogance — or Thor, the Viking god of thunder who fought far-flung mythology and sci-fi-based villainy in the modern day. The characters of Namor and Thor were not dissimilar, what with both of them being haughty princes of fantastic realms who spoke in stilted, faux-Shakespearian dialogue while handing out severe ass-whuppings, and I have loved both of these heroes since first encountering them in 1969. I would have loved to have seen the Sub-Mariner make the leap to the Hollywood screen first, but Namor never achieved the level of exposure or popularity held by his Norse stablemate, so Thor's transition was inevitable once the wave of Marvel Comics-derived movies began to rake in vast amounts of cash at the box office.

Having eagerly anticipated an adventure of Marvel's original answer to Superman (a role usurped in recent years by the unspeakably boring Sentry), I was the built-in audience for a Thor movie from the get-go, and last night I finally got my wish and checked out Thor's big screen debut at Manhattan's venerable Ziegfeld movie palace, accompanied by my usual pack of friends — most of whom are tasty chicks — who aren't comics fans, but who always go to the big superhero films on opening night. Part of the fun of these expeditions is that we hit a nearby bar for post-movie eats, alcoholic libations and erudite discussion of the film's merits and the relative hunkiness of the super-powered protagonist (there was much lusty commentary after IRON MAN), with Yours Truly acting to field questions about how faithful the movie was in relation to its source comics. At times, being the go-to geek is the thing to be, boy...

So we all went to see THOR, and here's the skinny:

The film updates and rewrites the origin of Marvel's version of the Norse god of thunder and opens with the blonde super-hunk's unconscious form crash-landing in a remote desert expanse in New Mexico, where he's found by astro-physicist Jane Foster (Natalie Portman), her Swedish colleague and mentor (Stellan Skarsgard) and an annoying student (Kat Dennings). Upon asking aloud how he got there, the scene flashes back to Asgard, the other-dimensional realm of the ancient Norse gods, and the coronation day of Thor (Chris Hemsworth). His aging father, Odin (Anthony Hopkins), intends to pass his rule on to his firstborn son while Thor's frail and dark-aired brother, Loki (Tom Hiddleston), remains on the sidelines. Just before the ceremony can be completed, the security of Asgard is breached by a trio of Jotuns — aka Storm Giants — who seek to steal an ancient and powerful artifact. When that plan is thwarted, Thor proposes to move against the Jotuns and disobeys his father's direct order to just leave that shit alone. From that act of rebellion, aided by Thor's old pals, the Warriors Three and the warrior-goddess Sif, spirals the threat of all-out war, so Odin strips his favored son of his powers and enchanted war-hammer , Mjolnir, and banishes him to the Earth. It is on Earth that Thor, the toughest of all Asgardian warriors, must learn humility and at least a modicum of wisdom, while his absence leaves the gate open for intrigue back on Asgard that starts closer to home than any of the immortals suspect...

That's all I'll say in regard to the plot, but I totally dug the flick and proclaim it my favorite of the Marvel films released thus far. It was not overlong (it's just shy of two hours), moved at brisk pace, and did not suffer from a weak final act (unlike IRON MAN), so apparently lessons have been learned from the previous Marvel film adaptations. The only thing I did not like about the film was the unnecessary character played by Kat Dennings, the aforementioned annoying student, but even she did not get to Jar-Jar-level annoying because her screen time was wisely limited. As for the highlights, here's what stoked me about this flick (I advise Googling any names in the following list that you are unfamiliar with; explaining stuff here would take up to much space and time):


I could go on and on, so I'll just stop here and urge you see THOR immediately. The only thing I would advise against is wasting the extra money on seeing it in 3-D. The 3-D effects don't really "pop" all that much and seeing it in 2-D will rob the film of not one iota of its fun and wonder. Verily, TRUST YER BUNCHE!!!
Posted by Bunche (pop culture ronin) at Saturday, May 07, 2011

Thanks for confirming my inclination to see it in 2D.
I cinsider 3D a gimmick to pry even more money out of us than the lready exorbitant prices AMC charges in my area.

And they wonder why attendance is down?

Coupla things. First, I think all the flap over Idris Elba being cast as Heimdall was firmly and resoundingly quashed by his actual performance. Elba was, in a word, "awesome." I also like the fact that while it was made clear that Thor was banished to Midgard to repair his character flaws and become "worthy," we were spared a monologue explaining exactly how he was unworthy. Clearly he needed to learn humility and patience and self-sacrifice, but that fact is borne out by the story and left to the audience to interpret rather than being spoon-fed. This regard for the intuitive abilities of the audience is displayed throughout the script and is one of the things I liked best about the movie. I was played to, not played DOWN to.

Wow, I am surprised you liked the film. I thought it was terrible.

Despite a budget of 150 million, it looked like a Dr. Who set in asgard and a fake western outpost when on earth. In fact the whole plot (or lack of it) reminded me of cheap sci fi unworthy of the god of thunder.

It was also poorly casted. Possibly the worst performance by Anthony Hopkins ever. He seemed half dead which was fitting because his character was asleep most of the film.

whoever the actor is who plays thor seems more suited for a soap opera. He had the wrong temperament for the classic marvel thor. Just seemed to be a british GQ type of guy. So un-Thor-like was he that I could kick his ass.

Methinks you were wearing super geek glasses when you watched this.

A very unconvincing Loki. The character was barely developed. It is very hard to buy in to him as villain worthy of climactic ending fight scene (which is contrived and unbalanced since Loki is not a fighter character)

volstagg the voluminous was not fat enough

sad when the best thing about a film is natalie portman

should have been direct to DVD.

Sorry, Larz, but I genuinely enjoyed the film and "geek glasses" had nothing to do with it. I love Batman — as you no doubt recall — but I hate every one of his live-action films (although I did enjoy Heath Ledger's Joker). We'll just have to disagree on this one.

I really enjoyed Thor and felt that they did a stand up job with the story. Even the little inside jokes were on target. I am totally looking forward to Captain America now. Not too sure I will give a rat's behind about "X-Men: First Class" though.