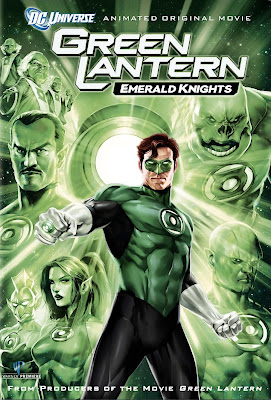 NOTE: The mythos of the Green Lantern Corps has a loooong history and many aspects that need more detailed explanations than I can provide in a simple DVD review, so I'm approaching this hoping you already know what I'm talking about. Trust me when I say that all of this stuff is explained quite well in the film itself, but me doing so here would derail this article onto too many tangents and render it too long for its own good.

At first it seemed as though this straight-to-DVD animated was nothing more than a naked cash-grab to capitalize on the buzz over the upcoming GREEN LANTERN live-action film, but I have to say I was very pleasantly surprised to find it the perfect prerequisite material for seeing the summer blockbuster. This animated effort is basically several "Tales of the Green lantern Corps" short stories brought to life, and the tales contained herein are entertaining as hell and offer the layman a very accessible crash course on the whole Green Lantern thing. In fact, I'll even go so far as to state that this DVD comes from out of nowhere to be a strong contender for the title of "best DCU direct-to-DVD feature." 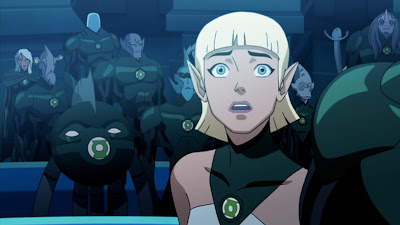 Rookie GL Arisia, about to experience some very dire on-the-job training.
The film's framing device takes the audience along with high school-aged rookie Green Lantern Arisia (Elisabeth Moss) as she is thrust headlong into an emergency combat situation on her first day as a ring-slinger, and she's understandably nervous because she has yet to receive any kind of proper training. During the waiting time before the threat is met by the entire Green lantern Corps, Hal Jordan (Nathan Fillion) fills Arisia in on some of the lore of the Corps, and the stories chosen are for the most part winners. Here's what we get: 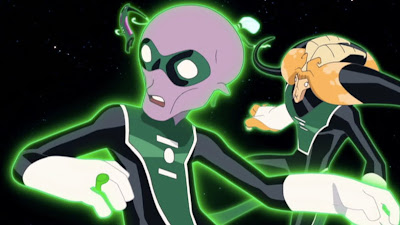 The story of Avra, a mere scribe who was present to chronicle the birth of the Green Lantern Corps and who became the first GL to figure out the use of the ring's "constructs." The sequence where he implements his willpower as directed through his ring against an armada of heavily-armed star-cruisers is a seriously cool "Holy shit!" moment. 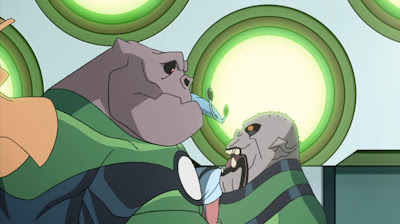 Based on the story "New Blood" by Peter Tomasi and Chris Samnee, this one's a look at the boot camp days that forged the Kilowog we know, love and respect. In an interesting casting choice, Henry Rollins gives voice to Kilowog and I'll be damned if his patented intelligent intensity is not exactly the interpretation the character needed. 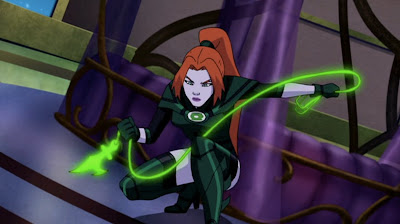 Based on "What Price Honor?" by Ruben Diaz and Travis Charest and adapted for the screen by DC Comics editor Eddie Berganza, this segment relates how GL Laira, a royal family member from a planet whose martially-oriented culture bears a strong resemblance to imperial China, is sent to her homeworld to determine why the place has become a hostile "outlaw" world for seemingly no reason. I found this segment to be the weakest in the film, but that's not to say that it's bad. It feels like a Shaw Brothers period piece martial arts film transplanted to deep space and I don't think the two stylistic elements really jibe, but the segment scores extra points for Laira's very creative use of her ring's constructs to form weapons that alter their shape as needed during her wuxia-style set-to with her warlord father, including an impressively-choreographed deployment of a rope dart (pictured) made of sheer will. 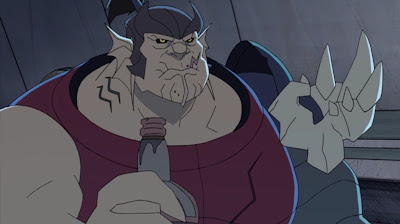 Based on the classic short story by Alan Moore (whose name was not in the credits, probably at his request) and Dave Gibbons (who wrote the screenplay) — which just so happens to be my all-time favorite Green Lantern Corps short story — this is a slightly-retooled version that put an ear-to-ear grin on my face. I won't tell you what's it's about so as not to give away the punchline, but this and the Kilowog segment were my favorites in the film. With wrasslin' legend Roddy Piper as the voice of Bolphunga the Unrelenting. 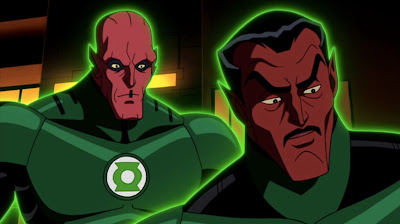 Based on "Tygers" by Alan Moore (again uncredited) and Kevin O'Neill, with a screenplay by superstar GL comics-scribe Geoff Johns, this is another re-tooled version of a classic GL Corps short story that adds Sinestro and a vision of the Sinestro Corps War to the story of Abin Sur's run-in with a malevolent and precognitive entity named Atrocitus.

It's a very solidly-packed eighty minutes and the visual scope is much more epic than I was expecting. The short story format also greatly works in the film's favor, allowing for brisk pacing that precludes any slow spots. I enjoyed the earlier direct-to-DVD GREEN LANTERN: FIRST FLIGHT, but this entry blows it out of the water in terms of visual spectacle, action, a cornucopia of geek-candy. HIGHLY RECOMMENDED, so snag it when it comes out on June 7th.
Posted by Bunche (pop culture ronin) at Thursday, May 26, 2011