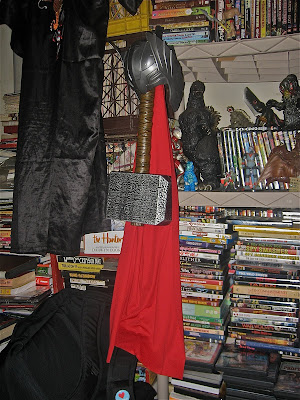 As many of you are no doubt aware, this Friday sees the long-awaited arrival of the Mighty Thor — perhaps Marvel Comics' #1 wrecker in the superhero crowd, this side of the Hulk — and I've awaited this flick my whole life. So, by way of goofy celebration, I'm going to represent at the 7:15PM show at Manhattan's fabled Ziegfeld theater decked-out in an intentionally stoopid Thor costume. I assembled the outfit's elements over the past two weeks and it looks more spectacularly idiotic than I had imagined.

The simplest item required for the costume was a cheap red cape that I was able to procure with no problem, but when I ordered the so-called "deluxe" helmet via Amazon, no mention was made in the product description of the fact that the item was only the front half of the helmet and that the rest was an adjustable velcro strap at the back, however I was not at all pissed about the unintentional (?) deception. The half-helmet design and the straps allow much greater ease of positioning the big, blonde Afro wig I got for the outfit, plus it allows a lot more of the wig to be visible than a full helmet would have. So, win. 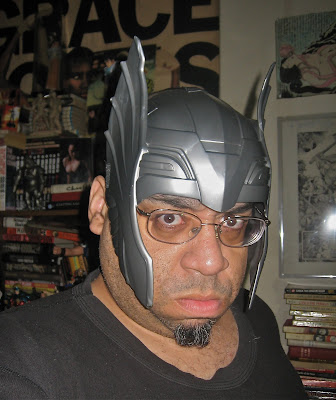 The "deluxe" Thor half-helmet.
The next most important component was Thor's war hammer, Mjolnir, and while there are a number of options ranging in price from just over ten bucks to massive metal replicas that weigh around six pounds and cost up to $300, I went for a beautifully detailed plastic/PVC version that went for just over $25 and even has the wrist strap used to whirl the weapon. It also goes that extra-geeky distance and features the famous inscription found on the hammer: 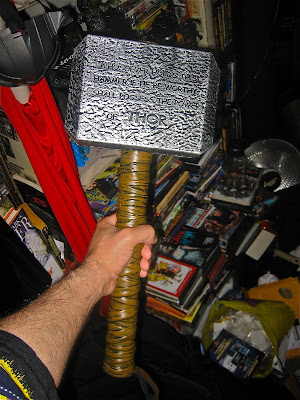 "Whosoever holds this hammer, if he be worthy, shall possess the power of THOR." Hey, works for me!

So, with the helmet, hammer, and a cheesy red cape at the ready, I also added a large blonde Afro wig because the Marvel version of the venerable Norse deity is known for his long, flaxen mane. Though I love me some Thor, I felt I could not pull off the straight-haired metalhead look, so the Afro wig is a nod to my own ethnicity and it works well for adding further absurdity to the already absurd idea of a portly black dude rocking the Thor look when my physique would have been a tad more appropriate for the thunder god's pal, Volstagg.

The rest of the outfit consists of a full suit of black thermal underwear (it's still pretty cold out and I don't feel like catching a spring cold) that will look like the low-budget simulacrum that it so obviously is, and over the thermals I'll have a pair of tattered black cutoff jeans, which will allow me to carry my wallet and keys. Over the thermal top, I'll be sporting a t-shirt that reproduces the shirt made available during Marvel's first 1960's merchandising wave, featuring the image of a hammer-slinging Thor as seen on the cover of JOURNEY INTO MYSTERY #89 (Feb. 1963). That touch may seem a bit incongruous, but there's a method to my madness. It's meant to evoke a stylistic similarity to those horrendous (and cheap) old Ben Cooper Halloween costumes that were mass-produced for ages and worn by many of those my age and slightly older. You know the ones I mean, those ugly, shitty plastic worn-over-your-clothes getups that (poorly) represented your favorite pop culture characters and came with a vision-obscuring and rather fragile mask, held attached to your head by a flimsy rubber band. And as if the costume itself weren't already enough of a blow to the dignity of both yourself and your favorite character, the costumes were almost invariably emblazoned with a large and garish logo that identified who or what you were supposed to be, presumably for the benefit of adults who passed out Halloween candy while having no fucking clue about what the kiddies were into. Two textbook examples of the awfulness of Ben Cooper costumes. I love how Flipper's tail is rather phallically-illustrated at crotch-level and the water droplets look like ejaculated gobbets of cetacean DNA.

Come to think of it, the Ben Cooper company once issued a Thor costume, but I believe it came out just a little bit before my time. 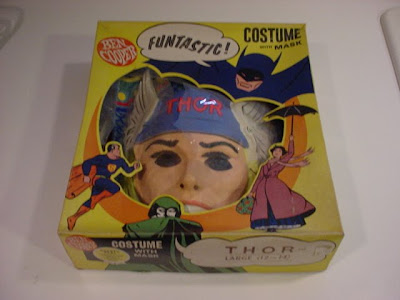 Just one of several images of the Ben Cooper Thor costume, as seen over at Wonderful Wonderblog.

So my replica 1960's Jack Kirby Thor shirt serves as the kind of embarrassing/awful identifying crest found on legions of Ben Cooper outfits.

The finishing touch for the outfit is the pair of "hypno-spex" I picked up last Halloween as part of my "Dr. Wiggly" costume, and hoo-BOY, does it add just the perfect touch of utter ludicrousity! 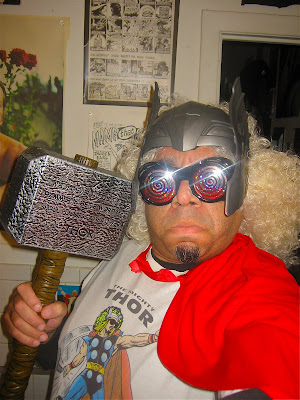 And thus was crafted "Soul Thor," an alter ego that lends me the aspect of a sepia Bruce Villanch while in the midst of a weekend under the influence of very strong hallucinogens. It makes me look like I should wandering around Thompkins Square Park, muttering incomprehensibly to myself while pushing a shopping cart full of filth-cover Barbie doll heads.
So check back in a few days to peep the whole outfit as seen from head-to-toe, hopefully photographed by the ever-reliable Suzi.
Posted by Bunche (pop culture ronin) at Wednesday, May 04, 2011