HORROR CLASSIC, OR NONSENSICAL PIECE OF CRAP? A look back at Don Coscarelli's PHANTASM (1979) 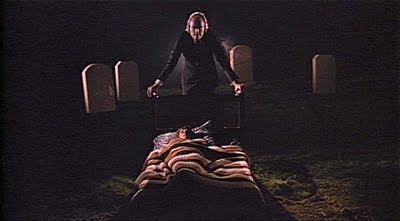 I was just fourteen when writer/director Don Coscarelli's PHANTASM first hit the screen, and its memorable TV commercials greatly intrigued me. Loaded with atmospheric imagery and the mysterious (and murderous) flying chrome ball, the ads were the perfect come-on to a young lad who was crossing over from childhood into young adulthood, displaying a tone not unlike some of the previously-encountered "kiddie" horror offerings, but it was rated R and therefore appeared guaranteed to deliver some true scares. It would be perhaps another two years before I actually got to see PHANTASM on cable, by which time the infamous "slasher" boom of the early-1980's was in fully, gory swing, and after being exposed to the avalanche of those orgies of unabashed gore, PHANTASM was perceived as something of a disappointment by many of my peers and even to this day the film is often cited as being an 88-minute load of bullshit that makes not a lick of sense. On the other hand, it is also considered by many to be very deserving of its considerable cult following, so what's the deal with this little low-budget horror offering that so polarizes viewers?

PHANTASM is less of a coherent narrative than a dreamlike stream of weird ideas and images that raise more questions than they answer. It's about an escalating series of eerie events as experienced by thirteen-year-old Mike Pearson (Michael Baldwin), whose parents have been dead for a couple of years and is being raised by his twenty-something brother, Jody (Bill Thornbury ), and when the story opens we're told that the town has been plagued with a number of mysterious deaths. When Mike witnesses the creepy mortician, the Tall Man (Angus Scrimm ), apparently stealing the body of a recent corpse and using superhuman strength to do so, he begins an investigation of the type common to kid's horror stories and Scooby-Doo cartoons. But in this case his world is turned into a never-ending nightmare of encounters with a aged and mute telepathic fortune teller who communicates through her pretty granddaughter, strange dwarves in monk robes, visits to a surreal mortuary that looks and feels like something straight out of a Ken Russell film, dreams that may or may not actually be happening to him, antique photographs that come to life and stare back at the viewer, and more freaked-out goings-on than one can shake a stick at. All of this stuff is followable in a linear fashion and it is a fascinating and visually creative cinematic journey, but nothing is ever explained to any level of real satisfaction. Is Mike actually experiencing all of this shit, or is he going insane? Who is the Tall Man? Exactly why is he stealing corpses to transform them into diminutive robed zombie slaves? Is he an alien? Is he from another dimension? Is this a horror movie or actually a bizarre science-fiction film in disguise? 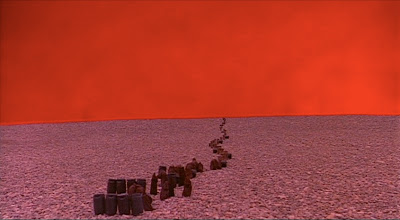 Is this another planet? Another dimension? Both? Who the fuck knows???
And what exactly is that lethal flying ball, and why is it equipped to exsanguinate anyone unfortunate enough to find themselves its target? 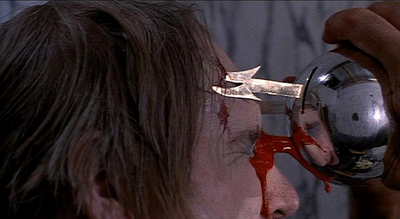 The mysterious ball goes to work.
Fuck if I know, but I can tell you this: PHANTASM is something you should definitely check out at least once, because it's unique in the annals of horror cinema. It's not what I would call actually scary — although it could definitely fuck-up the under-tens if they sat through it — but it is creepy as hell, and its stark, almost fairytale-like vibe make it feel like a film imported from some off-kilter netherworld, a strange alternate place where everything seems just one step slightly removed from reality as we are familiar with it.

Coscarelli was only twenty-three when PHANTASM went into production and he was twenty-five when it was released, and I think that his youth had a solid impact on how different and completely unpredictable this film is, resulting in an odd fusion of the late-1970's horror aesthetic and an art film sensibility. It also displays healthy lashings of pre -EVIL DEAD blending of horror and humor in some of its sequences, especially the business with the severed finger that transforms into a very aggressive fly-monster puppet, and it treads that fine line with great aplomb. As for his intent when crafting the film, Coscarelli has stated he simply wanted to make a horror film with lots of creepy shocks, and that the details cited by some fans as having deeper meaning are simply just there and bear no symbolic significance (for example, the presence of a copy of Roger Zelazny's novel MY NAME IS LEGION on the desk in Mike's bedroom; it was selected "because it had a neat cover and looked good"). I, for one, think he created a thought-provoking study in mood and almost-hallucinatory nightmarishness, and while it may not be scary per se , it has stuck in my head for thirty years and it continues to please something deep within me. It works on what I refer to as "kid logic" and its childlike sensibility kind of makes me think of what would have happened if the adventures of Gumby and Pokey had been directed by a madman. I love it for that. However, those of you who would approach this film in search of genuine balls-out horror, scares, or outright gore are likely to be sorely disappointed and wonder what the fuck the big deal is, but I urge you to set aside whatever preconceptions you may have and meet it on its own terms.

PHANTASM was successful enough to spawn three sequels, of which I only saw the second, and I don't remember much of it so I can't tell you if any of the questions raised in the first film are in any way answered. But, having recently sat through the original for the first time in over two decades and finding my fascination with it re-kindled, I'm curious to check them out. 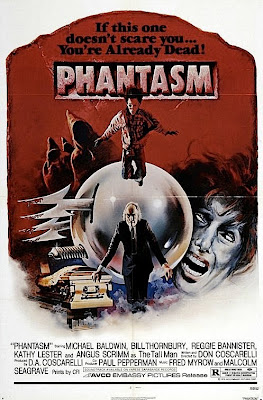 Poster from the original theatrical release.
Posted by Bunche (pop culture ronin) at Friday, May 06, 2011

I am with you about the commercial as a kid. It had me wondering "just what the hell is going on?" and caught my curiosity to the point where I sought it out years later.

Phantasm is an epic masterpiece. True, the film is a very successful exercise in creating the dreamstate on the big screen (as you sufficiently covered). But it's also a well played character study of the trio of heroes. It tackles being alone in a cruel world and how acknowledging that shit scares everyone, but particularly the kid in all of us (portrayed expertly by A. Michael Baldwin).

The sequels are very good with III being the most "Evil Dead" of the series. But the hidden gem you'll really want to check out (if you haven't yet seen it) is KENNY & COMPANY, Coscarelli's pre-Phantasm day/week in the life piece of a couple neighborhood kids. It's an exceptionally honest and accurate (not to mention funny and entertaining) look at the time it was filmed.

I liked the first movie because it didn't explain things. Up to that point I'd gotten tired of (and still am today) movies that just feed you everything and don't allow you to actually think about what you're seeing. Sure I like simple stuff as much as the next guy but Phantasm is not that movie and I adore it for that. The others, if I recall correctly (and it's been years so I very well may not) didn't _really_ fill in any blanks either but I still liked them. I really should go back and watch them again. I just wish I could afford to get more than one disc at a time from Netflix. This is something I'd love to marathon. Ah well.

And that anon comment was supposed to be from me. >_<

Wait never mind. lol I was looking at the wrong window.