I spent a good part of yesterday afternoon visiting at the home of the mentor of the Marvel Bullpen during my years in its ranks, John Romita Sr., and his wife (and my former boss), Virginia, and it was a blast of fresh air through the fetid confines of my none-too-happy/eventful life of the past few months.

You see, a while ago I decided to get up the guts to ask John if he would draw a custom piece for me of one of our mutual favorite characters, specifically Burma from TERRY AND THE PIRATES, a strip we both agree is the best ever committed to the Sunday page. John is of course best known for his defining work on THE AMAZING SPIDER-MAN and the majority of the pieces he does for his fans feature everyone's favorite web-slinger, but his true forte is beautiful women so I figured why not ask instead for a portrait of the character who inspired him to pick up a pencil in the first place? In his formative years, John was fascinated by Milton Caniff's work on TERRY AND THE PIRATES and he saved the strips from the newspaper to study, and from there his facility for character-propelled storytelling and gorgeous linework sprang, eventually leading him to do a pretty damned good Caniff. So good in fact that he auditioned to replace Caniff on the series when Caniff left to create STEVE CANYON, a strip that was creator-owned, but the syndicate made the drastic error of choosing George Wunder over John and thus TERRY AND THE PIRATES descended into irredeemable mediocrity. But I guess the newspapers' loss was Marvel and comics history's gain, so it was all for the best.

As we reminisced about old friends and colleagues and discussed the current state of the comics biz, it felt so good to me to be able to not only sit and hear the vast wisdom of one of the medium's grandmasters merrily imparted, but to also discuss this stuff with two people who needed no preamble to the subject. They'd been deep in the thick of it for fifty years, so imagine the stories they could tell... 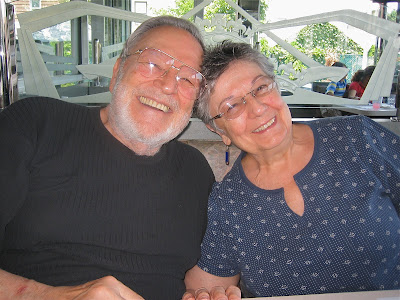 John and Virginia Romita: comics royalty and two totally down-to-earth human beings whom I am honored to know.

When John handed me the drawing of Burma, I was simply blown away. While her fellow comic strip cast member, The Dragon Lady, is by far more famous to the general public — and my former favorite female character in the series — those of us who've read Caniff's run on TERRY AND THE PIRATES in full all tend to gravitate to Burma because she's by far the more relatable character, plus she's a very intriguing and rather enigmatic figure. Here's the skinny o her from Wikipedia's entry on the strip (it's 100% accurate):

Burma: Real name unknown, a con artist, former pirate confederate and sultry singer but with a good heart. She meets up with Terry and Pat several times and she and Terry share a romantic connection but Burma is afraid of letting it go further. She's identifiable by her habit of singing "St. Louis Blues."

Here's what John came up with by way of his interpretation (double-click on the image to see it larger): 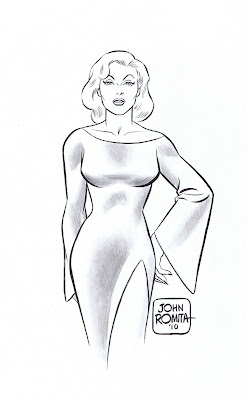 Once again, John's mastery of drawing women is apparent, and I have to get this framed immediately. It's 11" x 17" and it holds me mesmerized as I look at it it. (NOTE: this piece is dated 2010 because it was finished just before last Thanksgiving. John's schedule and mine did not properly jibe for us to get together for a pickup until yesterday.)

One of the things that I stand fast by is my policy of never getting rid of any of the pieces in my collection, especially anything done specifically for me, and this piece shoots straight to the Top 3 Holy Grails of the whole lot. I'm deeply honored to own this and I thank John for it from the bottom of my heart.
Posted by Bunche (pop culture ronin) at Thursday, July 21, 2011

I am at a loss for words... Beautiful. Simply beautiful.

John doesn't suck, does he? lol This is wonderful!

Not only is JR one of the best pencilers to ever grace a comic page (he would surely disagree, modest as he is) he is also one of the NICEST people I've ever met, as is Virginia. I sorely miss those days at Marvel.