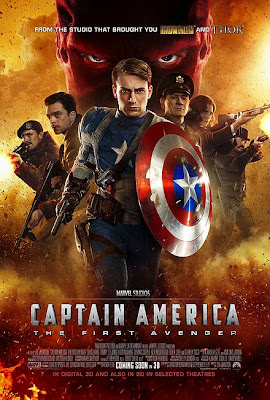 Well, color me stunned. After a plethora of movies based on Marvel Comics heroes over the past decade-plus, they finally made one that's a completely solid winner from start to finish. I enjoyed THOR a hell of a lot and IRON MAN was great until its utterly rote final act, but CAPTAIN AMERICA is a note-perfect confection that gives the faithful exactly what they want while introducing the classic character to modern movie audiences in an engaging and compelling way.

The narrative gives us Cap's origin yet again, but tells it in a way that really lets us get to know and care about scrawny, 4F wannabe soldier Steve Rogers (Chris Evans) before he gets anywhere near his star-spangled battle togs. Cap's story takes us from the streets of Brooklyn to WWII's European theater of operations, paralleling his development as America's first super-soldier with the world-conquering machinations of Johan Schmidt (Hugo Weaving), aka the Red Skull, an insane and megalomaniacal Nazi super-soldier who was the first success of the super-soldier process' inventor, Dr. Abraham Erskine (Stanley Tucci). The Skull has gotten his hands on an ancient Norse — read "Asgardian" — artifact of unexplained but vast power (comics fans know it's the Cosmic Cube) and it's only a matter of time until he harnesses its powers for use in taking over the world — first stop, New York City — and usurping Hitler's Third Reich with the super-scientific ordnance wielded by Hydra, an organization spun out of Nazi Germany's special scientific forces, so after a false start as a pitchman for war bonds, Cap takes the fight to the Red Skull. Over the course of the film, Cap proves his mettle as a warrior and hero, aided by the capable likes of old neighborhood pal Bucky Barnes (Sebastian Stan), British special agent Peggy Carter (Hayley Atwell) and the Howling Commandos, and his wartime exploits come to a climax that results in him literally becoming a man out of time.

I've left out the details so you can witness it all for yourself, but here are the points of note: 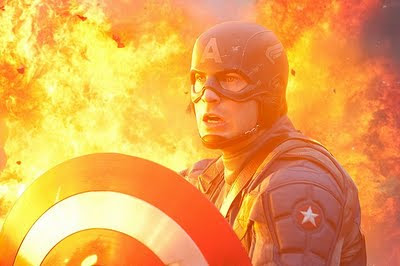 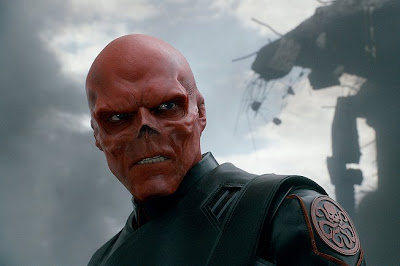 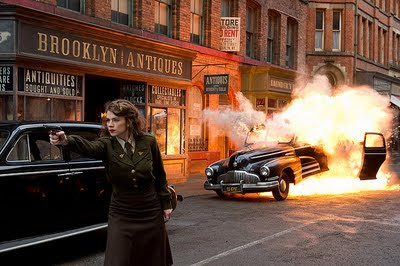 Agent Carter takes the fight against Nazi scum to the streets. 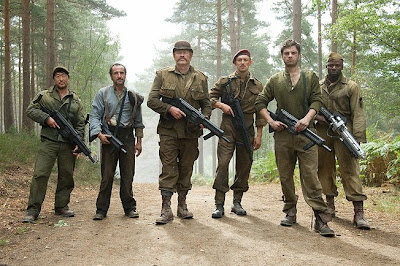 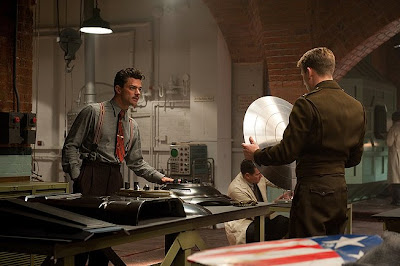 Cap receives his shield.
Bottom line: CAPTAIN AMERICA is a rousing bit of entertainment that looks to deservedly be a hit. I enjoyed it immensely and it is in my opinion the acme of what a superhero movie should be. This, folks, is the Marvel Comics movie against which all others should be measured.
Posted by Bunche (pop culture ronin) at Saturday, July 23, 2011

I liked Captain America more than I expected. This was the first hero movie I caught this year, and my expectations for hero movies tends to be pretty low as of late. I loved that they anchored the movie in the 1940s, with lots of nods to Marvel's golden age, and the era's pulp fiction and serial movie adventurism.

I wasn't as won over by Evans portrayal of Steve Rogers as you, but I can't think of any current actors who could have done better. Great supporting cast - Hugo's Red Skull was the best, truest translation of a comic book villain I've seen yet.