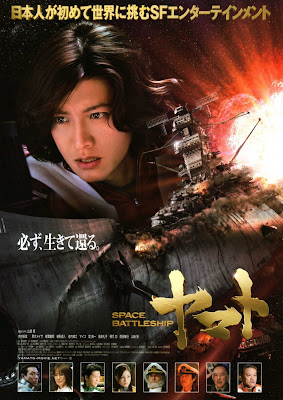 The ongoing trend of rehashing old manga and anime properties as live-action films for the current generation has yielded little of any worth — the two GE GE GE NO KITARO films and 2004's CUTIE HONEY being the rare and genuinely charming exceptions — and I am deeply saddened to report that this adaptation of the venerable SPACE BATTLESHIP YAMATO joins the ranks of duds like CASSHERN and the execrable DEVILMAN. I covered the first nine episodes of the classic 1974 anime series of SPACE BATTLESHIP YAMATO in an earlier piece, so the real background info primer for the newcomer can be found by clicking on this highlighted bit.

The live-action movie version more or less gives us a remake/re-imagining of the epic journey to the distant planet Iskandar on a quest to obtain an alien device that will save the Earth from its imminent radioactive demise thanks to constant bombardment from radiation bombs dropped by hostile extra-terrestrial forces, but several factors work against this re-telling. First and foremost, one of the aspects that made the original a classic and a Japanese cultural institution in much the same way that STAR TREK is here in the States was its revolutionary emphasis on characterization and allowing the audience to get to know the show's many characters well enough to be emotionally invested in them so that when the audience witnesses the horrifying trials they undergo, we share in their struggle. A twenty-six episode narrative allows a lot of room for character development that simply is not possible in a film that's only just over two hours long, so the filmmakers of the live-action feature rely on the audience already being familiar with the characters and the basics of the story's particulars, and as a result the assorted intimacies depicted between the characters are known and understood solely by those in the audience who've seen the original. All others will be left asking "Who's that guy? Why are those two so close and devoted to each other?" and a slew of other questions that the script does have time to answer thanks to the tale's brisk pace.

With the action rushed, the original narrative's year-long journey is seen as a relatively straightforward affair, peppered with ambushes and showy CGI space battles, but gone is every trace of suspense, paranoia over impending attacks, the loneliness, boredom and frayed nerves that go with interstellar travel. The all-too-human experience of what was once a crew comprised mostly of rookie cadets has been re-jiggered so that the entire ship's complement are now experienced soldiers and pilots, so the heroes do not learn anything or grow and mature over the course of the journey, and they are virtually fearless in battle, making it impossible to care about any of them. Even the deep, brother-like friendship between protagonist and immediately-promoted-to-acting-captain Susumu Kodai (actor and pop star Takuya Kimura) and ship's helmsman Daisuke Shima (Naoto Ogata) is given no fleshing out and we are expected to take it as rote that the exchanges between them are meaningful.

I could go on and on but instead I'll just present a laundry list of the rest of my issues with the film, just so we can get this over with and move on to something else (I have a DVD of old episodes of GUNSMOKE running as I'm writing this and they are far more engrossing than anything that this film has to offer):

Starbuck, er, Yuki Mori (Meisa Kuroki), being a morose bitch in the mess hall. Nope, nothin' at all like a scene out of the rebooted BATTLESTAR GALACTICA. Nosiree...

Actress Meisa Kuroki enacts a character so close to Starbuck that the makers of BATTLESTAR GALACTICA would seem to have every right to sue. Yuki is now a fighter ace, dour in demeanor and short-tempered enough to punch her fellow pilots in the face if they piss her off, in other words an Asian Starbuck clone. Yawn.
The bottom line is that highly anticipated though it was, SPACE BATTLESHIP YAMATO is an utterly soulless, merely mediocre Crib Notes version that is sure to disappoint any American fans of both the original un-altered Japanese original animated series and the Americanized STAR BLAZERS. Curiosity may get the better of you, but you'll be glad for your DVD player's ability to be turned off so you can go do far more interesting things and get back to the film later, if such should be your desire. I have certainly seen far worse films, but this flick is barely a husk of what was once one of the great anime stories, and that just plain makes me sad. And while there are plenty of good reviews for this film to be found online, I think those reviews are akin to those penned by the brainwashed critics who declared Tim Burton's BATMAN to be an exciting and innovative work of genius. Maybe they're afraid to admit that in this case the emperor has no clothes, but don't be deceived.
Posted by Bunche (pop culture ronin) at Thursday, July 14, 2011

Couldnt have said this better myself Desslock would have been so aweseome to see live action. And you are right about the battlestar galactica thing to only in the fact that this rapes this franchise as much as that so called battlestar raped the original. Cylons are cool robots not emo people.