NOTE: This is an update/minor revision of a review I wrote five years ago, and I'm reprinting it today to honor this film finally receiving a legitimate release on DVD. 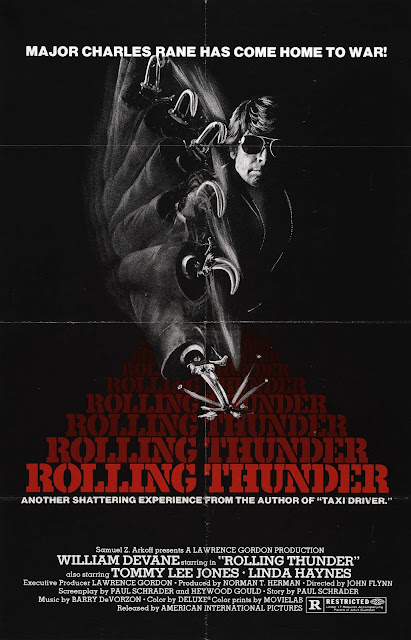 After years of hearing about it, when I finally saw director John Flynn’s ROLLING THUNDER, one of the better-regarded B pictures of the 1970’s, I was surprised by what it had to offer. Often lumped in with the ultra-violent action movies that played in the seediest of grindhouses, ROLLING THUNDER comes off as a breed apart from its contemporaries by virtue of it being a film that Sam Peckinpah happened not to make. Possessing far more emotional depth and introspection than you’d expect thanks to Paul (TAXI DRIVER) Schrader’s bleak script, as well as cribbing liberally from Peckipah’s THE WILD BUNCH, STRAW DOGS, and BRING ME THE HEAD OF ALFREDO GARCIA, the film enjoys a certain cult status yet remains somewhat obscure for no adequately explained reason.

William Devane stars as Air Force Major Charles Rane, freshly returned home to 1973 San Antonio, Texas after seven years of traumatizing abuse as a POW in Hanoi, with fellow soldier Corporal Johnny Vohden (Tommy Lee Jones) at his side. During his time in captivity, life in the States continued and Rane’s wife, accepting the possibility that her husband was most likely dead, found love with a local policeman, and being only sixteen months old when his father left for Viet Nam, Rane’s son came to view the cop as a surrogate father, so when faced with the sudden return of the husband/father the worlds of all involved become a quietly-tense emotional hell. Rane’s experiences in Hanoi have left him with deep psychological scarring and a sense of having no idea what to do with himself, but accepting its inevitability, he’s set to grant his wife a divorce but refuses to let go of his son. When his wife’s lover (the cop) shows up to talk things out with him, Rane reveals how “institutionalized” he is in the wake of years of incarceration and torture, demonstrating a masochistic pleasure in reenacting a nasty rope torture and explaining his philosophy toward those who tortured him: “I learned to love ‘em.”

When the town honors the Major for his service to his country, he’s presented with $2555 in silver dollars, one silver dollar for each day he was a captive, by Texas belle Linda Forchet (Linda Haynes), an attractive blonde who wore a bracelet in his honor for the past seven years. As his alienation from his family worsens, Rane again runs into Linda and as the two share a drink at the bar where she waitresses, Linda, a self-professed “groupie,” throws herself at the Major, but Rane politely declines her invitation. Upon returning to his home, Rane finds his house invaded by a group of lowlife redneck thugs — including James Best, aka Sheriff Roscoe P. Coltrane from TV’s THE DUKES OF HAZZARD — and some Mexican muscle who try to coerce him into handing over the silver dollars. His years of abuse have steeled Rane against getting roughed up, and when he stoically resists their violent efforts, including holding his fist over an open flame, the thugs force his right hand into the kitchen garbage disposal, reducing it to so much chopped meat. 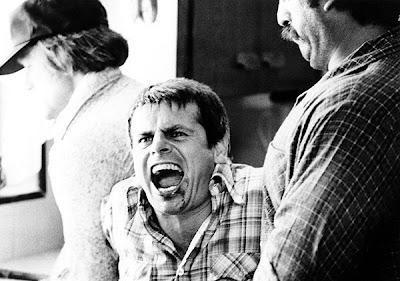 If you have a phobia about losing your hands, it may be advisable to give ROLLING THUNDER a miss.

At that point his wife and son come home and are threatened with death if he doesn’t give up the cash, but Rane’s son takes the bad guys straight to the silver dollars in an effort to save all their lives. That plan backfires when the thugs shoot all three of them, killing the mother and son while Rane somehow survives. All that over a mere twenty-five-hundred bucks and change. Nice.

Following weeks of convalescence, with the doting Linda a constant presence, and the acquisition of a hooked prosthetic to replace his mangled mitt, Rane hops into his red convertible with an unwitting Linda in tow and heads off to Mexico to exterminate the killers, with no more of a plan than to shake up local beer joints in hope of finding his quarry. Meanwhile, the cop realizes what Rane is up to and launches his own search for the whereabouts of the criminals, a search that results in the deaths of several bad guys and himself. But Rane is unaware of the cop’s fate and after meeting with disastrous results in his own search, Rane leaves a sleeping Linda (who has turned out to be a crack shot with firearms) in a fleabag motel and enlists the aid of Johnny Vohden, who is also having difficulty readjusting to civilian life and seeks to reenlist for ten more years for want of anything better to do with himself. Once again having a mission under a leader he respects, Vohden dons his uniform and displays a sense of happiness and purpose for the first time in the film. Armed for bear, the two track the villains to a Mexican whorehouse and sort the place out in a hail of bullets straight out of Peckinpah’s THE WILD BUNCH and scripter Schrader’s own finale from the previous year’s TAXI DRIVER.

That’s the basics of the story but the narrative is compellingly driven by the character studies of people who are tortured in both the literal and figurative senses of the word. Rane’s situation, Vohden’s need for purpose, and Linda’s history are all fascinating and elevate the material far above its perceived grindhouse categorization. If you’re looking for a vengeance yarn full of wall-to-wall carnage, you may be disappointed by ROLLING THUNDER, especially considering its reputation, and while it does have a couple of nasty moments and the Peckinpah-esque conclusion, the film has for more human concerns on its mind. All of the performances convey fully fleshed people rather than action movie clichés, and when stacked against many of it shooting gallery cinema contemporaries, ROLLING THUNDER is something very special indeed. I found my first copy of the film at the NY Comicon some five years ago, obtained from one of the usual handful of dealers in hard to find movies, and I would have gladly paid to buy a legitimate DVD, with the hoped-for extras of commentary and such, but at the time the film is not available on disc. That glaring omission in DVD availability has finally been rectified, and I intend to pick up the legitimate version as soon as possible.
Posted by Bunche (pop culture ronin) at Tuesday, May 28, 2013