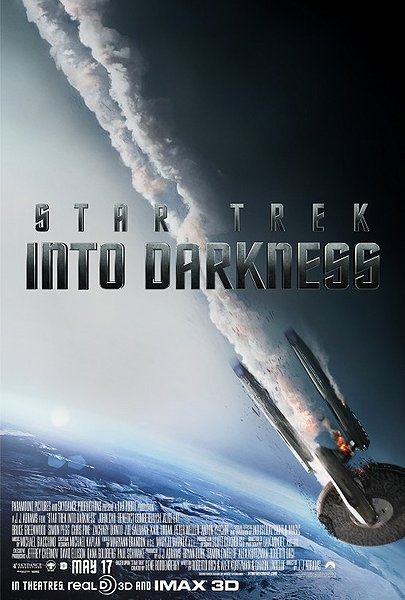 The U.S.S. Enterprise crashes on burns on the movie's poster. Was this an intentional comment on the film itself?

So I just got back from seeing STAR TREK INTO DARKNESS — no, the title does not possess a colon — and as I write this I have a disc of The Original Series playing  as a soothing bit of background ambience. There's a lot to cover here but one cannot really discuss the film without giving away the plot particulars, so allow me to state in short that the film, while not boring, gives the audience absolutely nothing new and comes off as a catalog of STAR TREK tropes enacted by simulacrums of the beloved characters for an audience that just wants the 'splodey action and pretty CGI effects candy while providing the mind and soul with little or nothing in terms of narrative meat. If you want a hollow amusement park ride spawned from one of the most seminal and influential science-fiction franchises in pop culture history, then this movie will likely please you immensely. If you are a fan of old school STAR TREK, the kind of space-set stories that were about people and examination of the human spirit within a futurist galaxyscape, then you will probably find a lot to grouse about and are advised to wait for cable airings. Unlike some of my peers whose opinions on STAR TREK I hold in considerable esteem, I did not think STAR TREK INTO DARKNESS was an outright piece of celluloid trash, but in no way did I come away from the film satisfied. In fact, if truth be told, I kind of checked out during the second half.

But what, you may ask, was it that did not turn me on about the latest trip into the void with the Enterprise crew? Allow me to answer that query in detail — a certain amount of familiarity with the lore of The Original Series is required — and before I do that, it's only fair to give the following caveat:

WARNING!!! HERE THERE BE SPOILERS!!! STOP READING RIGHT NOW IF YOU DON'T WANT TO KNOW EXACTLY WHAT THIS MOVIE IS ABOUT!!!

Are we good? Ready to continue? Okay, here's the skinny:

It's about a year after the events seen in the 2009 franchise reboot film (simply entitled STAR TREK, which I liked a lot) and Captain James T. Kirk (Chris Pine) violates the Prime Directive during an exploratory mission to a planet whose natives are still very much in a paleolithic state of development. Called on the carpet by Starfleet Command, Kirk finds the Enterprise returned to its original commanding officer, Christopher Pike (Bruce Greenwood) and himself demoted to its first officer after Mr. Spock (Zachary Quinto) unintentionally finks him out by telling the full truth about what happened in his mission report (which Kirk made no mention of in his submitted version). But Kirk's demotion proves to be a pointless plot beat because he's almost immediately reinstated as Captain of the Enterprise when Pike is killed during an attack at Starfleet headquarters in San Francisco by a mysterious terrorist named John Harrison (Benedict Cumberbatch) who apparently has Starfleet ties. Having already launched a devastating attack on the heart of London, Harrison flees Earth to hide out in a deserted section on the Klingon homeworld, Kronos, a planet Starfleet dares not risk voyaging to because their presence could launch all-out war with the already-hostile and encroaching Klingons. Motivated by desire to avenge his friend and mentor, Kirk begs Admiral Marcus (Peter Weller) to let him take the Enterprise on the search-and-destroy mission against Harrison that the Admiral has set in motion. Soon enough, our heroes end up on Kronos, loaded for bear with a compliment of 72 photon torpedoes of a design and purported destructive yield well advanced beyond anything in Starfleet's current arsenal. After an encounter with some Klingons that goes badly, the away team of Kirk, Spock, and Uhura (Zoe Saldana) are rescued by the very terrorist they came looking for, who promptly surrenders after hearing about the quantity of the aforementioned photon torpedoes. Once aboard the Enterprise, the true identity of Harrison is revealed, Starfleet proves to be less squeaky-clean than we had been led to believe, and it all culminates in lots of shootouts and 'splodey stuff.

Rather than explore the plot any further, I'll just get to the individual points of note: 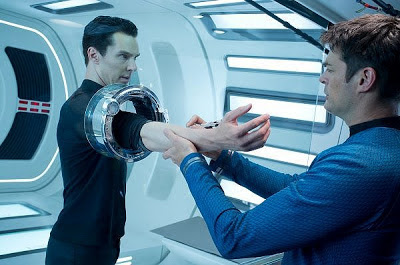 Khan in the brig: Glory holes...OF THE FUTURE!!! 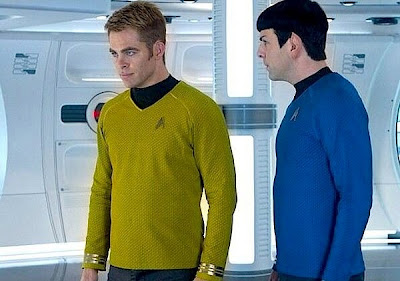 "Captain, exactly who are we? You certainly are NOT James T. Kirk, and I sure as fuck am NOT Spock."

As previously stated, I did not hate STAR TREK INTO DARKNESS but I could not care less about seeing the filmmakers haul out stories we've already seen and that have become iconic in the annals of cinematic science-fiction. Yeah, they probably went in that direction thanks to focus group testing (never a good idea) or due to a perception that WRATH OF KHAN needed to be re-jiggered — like how PROMETHEUS treated the ALIEN franchise, only nowhere near as nonsensically — for the audience of the twenty-teens, but I say fuck that shit. If people want to see THE WRATH OF KHAN, that's what Netflix and cable are for. The STAR TREK concept is first and foremost supposed to be about seeking out new life and new civilizations, with the accent on "new," and there's a whole galaxy out there that at this point in the reset timeline has yet to be charted. A galaxy is big. I mean really fucking ginormously BIG, so how about a film of the Enterprise actually getting started on its five-year mission and actually doing some fucking exploration? The story possibilities are limitless! The new film ends with that supposedly being where it's all going but I'll believe it when I see it in narrative action. I just hope the next film doesn't turn out to be about a war with the Klingons.

BOTTOM LINE: It's a fast-moving way to spend two hours and twelve minutes, but STAR TREK INTO DARKNESS is a TREK film for undemanding audiences who just want the pretty CGI and 'splodey stuff, and for longtime fans who by this point are so brainwashed that they no longer care what the studio gives them, just as long as it bears the STAR TREK brand. Wait for cable.
Posted by Bunche (pop culture ronin) at Saturday, May 18, 2013

"Khan and his fellow supermen were cryogenically frozen and set adrift in space (a la The Original Series entry "Space Seed") after they proved to be war criminals who sought the genocide of any and all who they deemed not as awesome as themselves."

They couldn't even get THIS part right.

Khan and his people did NOT seek the genocide of anyone inferior to them. If that were the case, they would have found themselves on a world with only 72 people living on it once they were done. That's not what they were about.

Khan and his people were products of selective breeding and genetic engineering. The scientists responsible for their existence failed to take into account that superior ability breeds superior ambition.

Once Khan and his people seized power across Earth, they actually brought stability and order to the planet. There were no massacres under Khan's rule, no wars until he was attacked. Khan was not a genocidal sociopath--he was a born leader bent on conquest and ultimately, ruling.

I'm not making this stuff up, this is directly from "Space Seed," which Abrams, Orci, Kurtzman, and Lindelof either neglected to watch or simply ignored when writing their regurgitation.

Their depiction of Khan is so wrong, so off the mark, that they might as well have gotten Richard Simmons to play him.