It's funny how returning to a movie over a decade after first seeing it can rewrite one's opinion on the piece. Case in point, legendary horror auteur Wes Craven's much-maligned CURSED, a werewolf outing that fell victim to studio tampering and neutering. As stated previously in some of this series' previous essays, werewolves are my very favorite of the go-to horror mainstays, so I'm willing to sit through pretty much anything featuring them, but more often than not they are ill-served by bad scripts or unimaginatively-handled budgetary limitations. When CURSED came out it was lambasted as possibly the worst of Wes Craven's efforts, but that was a criticism hurled at the film for its castrated PG-13 version. The behind-the-scenes accounts of constant studio meddling and rewrites, plus the unthinkable firing of practical effects wizard Rick Baker — the Academy Award-winning hand behind the groundbreaking makeup and practical effects for AN AMERICAN WEREWOLF IN LONDON — painted the picture of a doomed production, so fans of the genre responded with something other than open-armed enthusiasm. But now it's a hell of a lot better with the benefit of hindsight. With the furor over how its theatrical version was raped by the Weinsteins pretty much forgotten in the years since the theatrical release, the film, especially in its originally-intended version, can finally be fairly reappraised. It's really pretty good and in no way deserves the reputation it's been saddled with, and I say that as a person who initially found it a disappointment. It's also fun to see it now, as most of its cast has since gone on to bigger and better things and are now recognizable commodities.

The plot deals with a pair of siblings (Christina Ricci and Jesse Eisenberg) who hit an animal while driving late at night, causing a devastating car wreck. When they attempt to rescue the driver of the car they collided with, their efforts are cut short when the driver is pulled from the wreckage by a ravening beast and literally torn in half. As the brother and sister attempt to flee, the beast attacks the pair of them, causing minor wounds. They manage to escape but it soon becomes apparent that they have survived an attack by a straight-up werewolf, and they begin to display the heightened senses granted by the lycanthropic curse. Further complicating matters is the fact that the werewolf is still out there and rampaging and it appears to be getting closer to our protagonists, but for what purpose?

The unrated CURSED has the feel of teen/YA horror along the lines of BUFFY THE VAMPIRE SLAYER, only with considerably more gore and violence, and as such it's a lot of fun. There are a number of surprises and a couple of genuinely good twists that keep the expected tropes fresh, and it all moves at a brisk pace.Too bad the studio opted to neuter its impact in pursuit of a more lucrative PG-13 rating and replacing Baker's work with CGI effects. 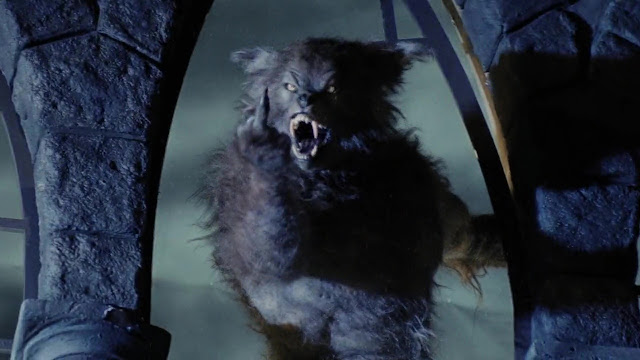 Not only does this werewolf talk, it flips the bird to its pursuers.

The film is also of interest to horror fans for being arguably the most-lightweight of Wes Craven's efforts. It's not at all a flavor that one would expect from the director who gave the genre such landmarks as THE LAST HOUSE ON THE LEFT (1972), THE HILLS HAVE EYES (1977), A NIGHTMARE ON ELM STREET (1984), and SCREAM (1996), and as such it is worth a second look. Not as strong meat as all-time classics of the werewolf roster, such as THE WOLF MAN (1941), THE CURSE OF THE WEREWOLF (1961), THE HOWLING and AN AMERICAN WEREWOLF IN LONDON (both 1981), or even more recent works such as DOG SOLDIERS (2002) and LATE PHASES (2014), but definitely worth including in your library of lycanthrope flicks. Juts make sure you get your hands on the unrated version, as the visceral, rapacious activities of werewolves need to be as ferociously bloody as possible, as befits one of the horror genre's apex predators. 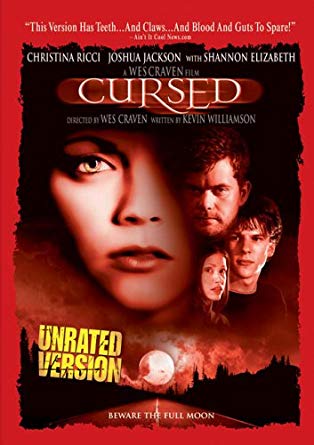