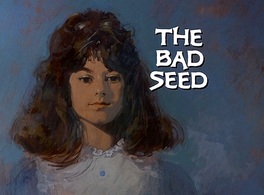 The infamous tale of Rhoda Penmark (now renamed "Rachel"), remade for the 1980's.

I'm kind of cheating with this one, and because of that this entry will be short. I already covered the classic 1956 version of this story eight years ago, so you can read the particulars of that near-masterpiece here. This made-for-TV adaptation of the stage play (itself adapted from a novel) about a pre-pubescent serial murderess is a tepid and unnecessary remake that only distinguishes itself from the original by not having a studio-mandated ridiculous "moral punishment" ending imposed upon it (it keeps the play's original coda), and by featuring my man David Carradine at his hilariously over-the-top best in the role of Leroy, the sorta-simple and definitely creepy handyman who at first enjoys teasing the wee killer (in ways that allude to possible pedo intentions) but soon realizes she's the coldest of cold-blooded murderers. 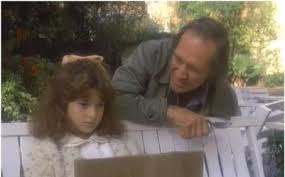 Rachel (Carrie Wells) endures the attentions of Leroy (David Carradine), but not for long...


Once Leroy susses out just what the little girl is, it's only a matter of time until he meets his famously horrific fate by immolation, but prior to that Carradine steals the show with a performance marked by unintentional (?) hilarity. Though a solid, serious actor when given something to really sink his teeth into, Carradine was even more fun when turned loose in unhinged parts in exploitation movies and cheap actioners, and I believe this may have been my first exposure to that loony side of him. I watched this TV movie when it first aired, well before I saw the far superior 1956 version, and I found it to be tepid though not lacking potential that could have been better-realized in more capable hands (which was later proven a correct assumption when I saw the original some five years later on American Movie Classics), but Carradine's performance stuck with me. If you must see this remake for any reason, do it for Carradine's Leroy. Otherwise, stick to the 1956 benchmark of the "creepy kids" sub-genre. 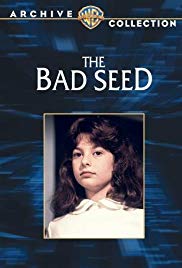