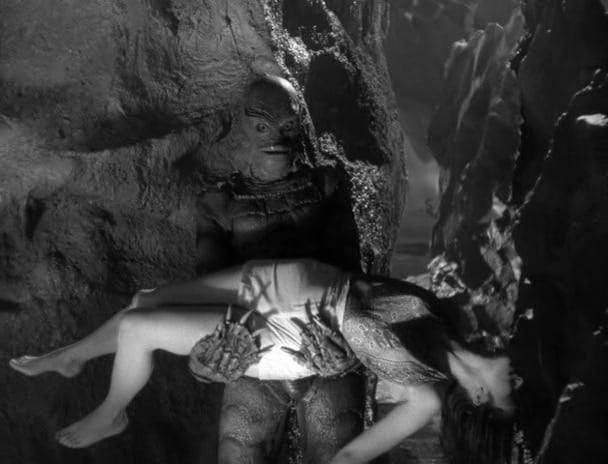 This one's less of a review and more of a heartfelt love letter to a "monster" who is near and dear to the hearts of myself and millions of advocates for teratism worldwide 65 years. 1954's CREATURE FROM THE BLACK LAGOON is perhaps the archetypal monster movie about a man-sized amphibian entity of apparently hostile intent, and though there have been many that followed in his wake, none of them held the near-primal resonance that this specific specimen wields.

The plot is simplicity itself: An expedition to the Amazon seeks further information after the discovery of the fossilized remains of a missing link between aquatic and land species, and upon their arrival at the remote titular location they encounter the "Gill-Man" (Ricou Browning), a tall, fish-like amphibious biped with great strength, sharp claws, and a nasty temper. More beast than man, the creature defends its territory with a lethal vengeance but is soon distracted by the beauty of the team's sole female member (Julie Adams, in her now-classic white one-piece bathing suit). It is presumed that the creature is the last of his species, so the presence of a female, human or not, stirs yearnings within him and  sends him on a hopeless quest to claim the woman for himself. As anyone who has seen the original KING KONG (1933) will tell you, that pursuit does not go well... 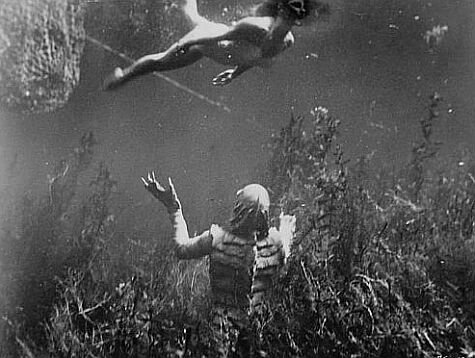 "But soft, what light through yonder window breaks? It is the east, and Juliet is the sun..." (Or Julie Adams, in this case...)

Seen today, the film is not scary per se, but it does provide entry-level thrills for the budding monster kids, and the fact that the Gill-Man is so beautifully realized is a major factor for the movie's undying appeal. Even by modern standards, the Gill-Man suit is a makeup effects masterpiece, and the Gill-Man is rightfully counted as the last of the great Universal monsters. For all intents and purposes, he looks real and very much alive, especially when seen wet and stalking about on dry land, wreaking havoc as he goes, with his mouth and gills working realistically as he breathes and implacably approaches the camera. 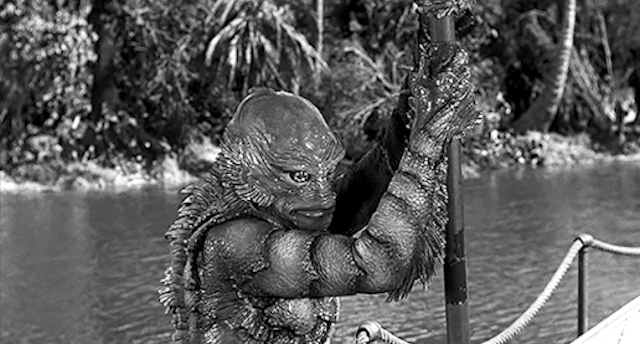 Just look at that magnificent bastard.

Much like Kong, the Gill-Man is an undeniably masculine and primal presence, and his motivations are all too easy to relate to from a human perspective. How dare these interlopers invade his home and then have to nerve to not only attempt to capture him, but also photograph him like a pack of waterlogged paparazzi? And him being smitten by the sight of Julie Adams gracefully making her way through his watery domain is fully understandable on a gut (and other organs) level, so who cannot relate? The Gill-Man is the lonely guy writ large and untamed, again like Kong, so his plight absolutely tugs at our heartstrings and we genuinely feel sorrow at his unfair demise — murder, if you ask me — and also for his species passing from the world with his decisive exit. (Or, rather, "decisive" until the two tepid sequels that followed after this first installment proved a hit.)

Since 1954, the Gill-Man has stood as the acme of the humanoid fish monster, a direct descendant of H.P. Lovecraft's Deep Ones or the residents of the eerie seaside town of Innsmouth, Massachusetts. He lurks beneath the waters of that Amazonian river and deep within the equally secret places within our minds, ever ready to drive away intruders and to perish in the search for a mate. And when looked at in this film, the Gill-Man's attentions toward his human object of fascination do not bring to mind any sort of intent for harm, but instead he seems quite innocent in his need for her. Yes, it's likely spurred by a legitimate mating urge, but he clearly does not want to hurt her. He is shown to have the power and the natural tools with which to render perceived threats into so much chutney, but he is in no way within the graphically-depicted realm of the utterly horrific fish-men rapists in the infamous HUMANOIDS FROM THE DEEP (1980). I dare to say that to many of us the Gill-Man is lovable and even beautiful in his own way, something expressed to perfection in Guillermo Del Toro's superlative "monster fairytale" for grownups, Best Picture Oscar-Winner THE SHAPE OF WATER (2019). To me, that film was the Gill-Man — or rather a superb stand-in, "the Asset" — finally being given the story he truly deserved, one  wherein he was treated with kindness, respect, and even outright wonder from some of the characters, and even given a happy ending.

I've loved the Gill-Man since I was little, and he was one of the first monsters that I learned to draw, once I was old enough to hold a crayon. He appealed to me because of my budding interest in amphibians and marine biology, and also because he was a creature that we were supposed to fear but we rooted for because of the mistreatment, frustrations, and disappointments that he endured over the course of three films. Hell, once I'd mastered the basics of prolonged underwater swimming, I modeled my early movements at it after the Gill-Man's style, complete with spatulate hands aiding in dragging myself through the pool or the ocean.

So, yeah. Gill-Man, I love you, and I hope you return someday, brought back to the screen by filmmakers who understand and appreciate you. I just wish I lived next to a swamp and could therefore have you as a most welcome neighbor. 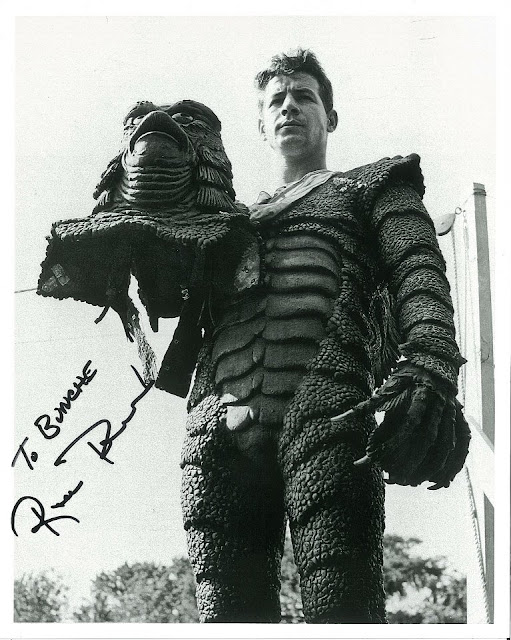 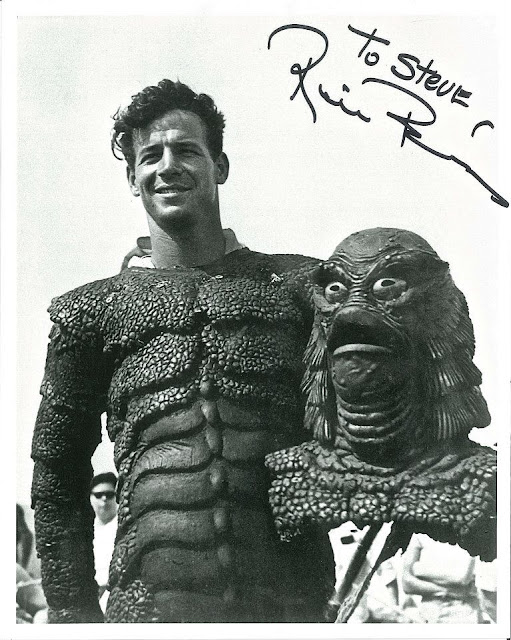 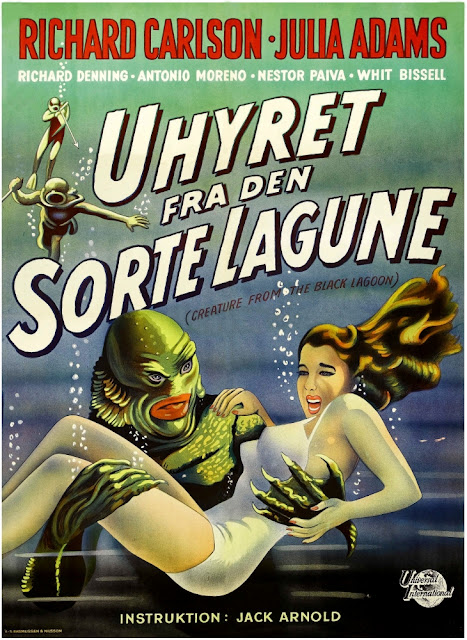 Poster from the Danish theatrical release.


The Dave Edmunds song quoted at the opening of this essay.
Posted by Bunche (pop culture ronin) at Friday, October 25, 2019