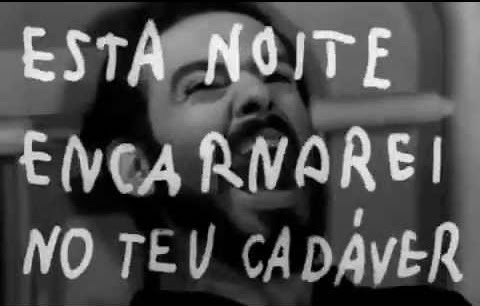 Picking up right where AT MIDNIGHT I'LL TAKE YOUR SOUL left off, the exploits of Zé do Caixão continue as our anti-hero rises after months of recovery from the metaphysical ass-kicking and blindness that he suffered at he end of the first film. Reinvigorated, Ze (Director and co-writer José Mojica Marins) once more stalks his small Brazilian town in furtherance of breeding his "perfect" seed with a woman in hope of gaining his bloodline immortality through a son, and with this renewed vigor comes the expansion of his power to induce raw terror in the locals. His mere presence sends people running and clears the streets as the devout fearfully cross themselves during his approach. And he eats up every ounce of the hatred he inspires. 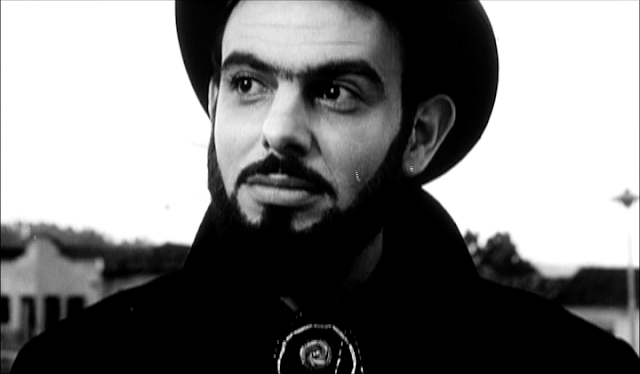 Aided by the hideous and hunchbacked Bruno (Nivaldo Lima, who looks like a fez-wearing Jerry Lewis who's had a melted candle haphazardly applied to his face), Ze kidnaps six women, with the intent that one of them prove herself to be "worthy" of bearing his child. Holding the women prisoner  in his home, complete with dungeon/lab straight out of a Universal horror classic, and dressing them in sexy diaphanous nightgowns (because why not), Ze finds all of his captives to be unwilling, with the notable exception of Marcia (Nadia Frietas). Marcia proves herself courageous and worthy to be the mother of Ze's child, but when Ze murders those who failed his trial of suitability (by having them subjected to having dozens of tarantulas crawl all over their nubile bodies), Marcia rejects him. 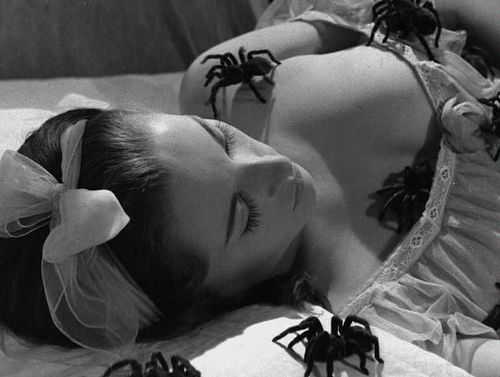 Ze takes this as a sign of weakness, declares her a disappointment, and opts to release her, secure in the knowledge that she will not report him to the authorities because his winning ways have somehow nonetheless secured her affection and loyalty. (Don't ask me. I didn't write this.) 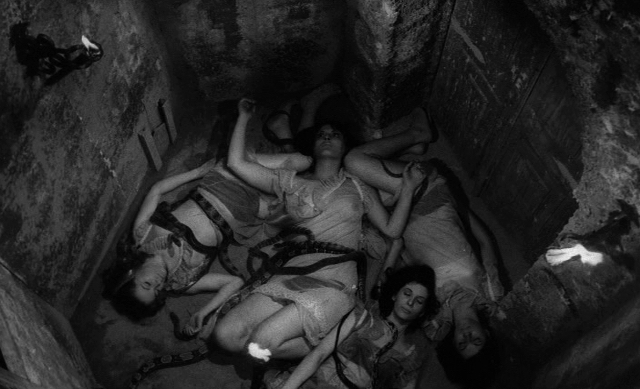 Worst version of THE BACHELOR ever.

Ze then shifts his breeding attentions to the sweet Laura (Tina Wohlers), the daughter of a respected local colonel, and in no time flat she falls under the spell of his manly charms and runs off with Ze. With the help of Marcia, Ze frames Truncador (Antoni Fracari), the colonel's hired muscle (literally, as he's a musclebound slab of a man), for the murder of Laura's brother, whose head was actually crushed beneath a massive stone weight by Ze and Bruno.

But Ze's new life with Laura hits a snag when he discovers one of the women he kidnapped and murdered was pregnant, and he remembers her cursing him with her dying breath. Despite his innumerable flaws, Zé do Caixão somehow genuinely loves children (he's previously been seen protecting innocent kids in this and the previous installment), so he finds himself wracked with guilt over having unwittingly murdered an unborn baby. In a truly memorable sequence, Ze imagines himself pulled from his bed and dragged screaming to a graveyard, where the hands of the damned claw their way through the soil and drag him down to a garish Technicolor Hell, which effectively counterpoints the rest of the film's moody monochrome, even envisioning His Satanic Majesty as a dead ringer for himself. 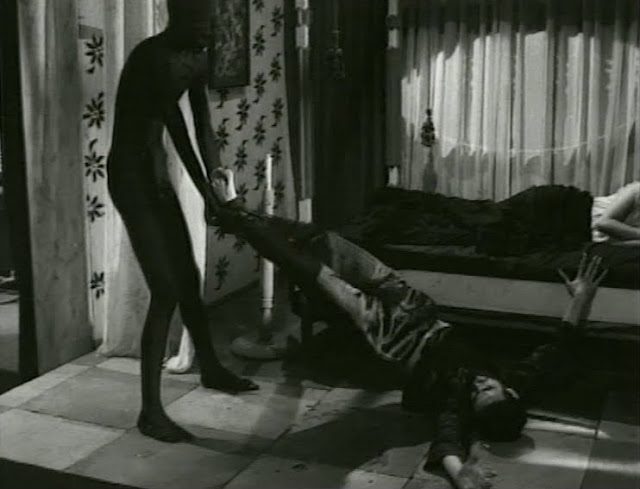 Ze is dragged from his bed... 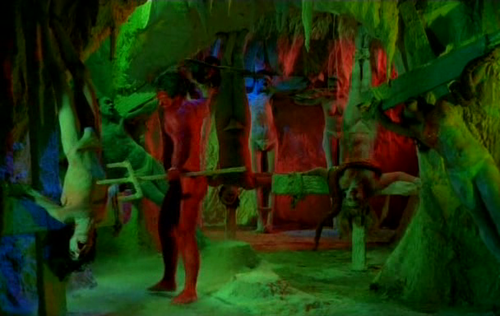 Forced to witness the tortures of Hell... 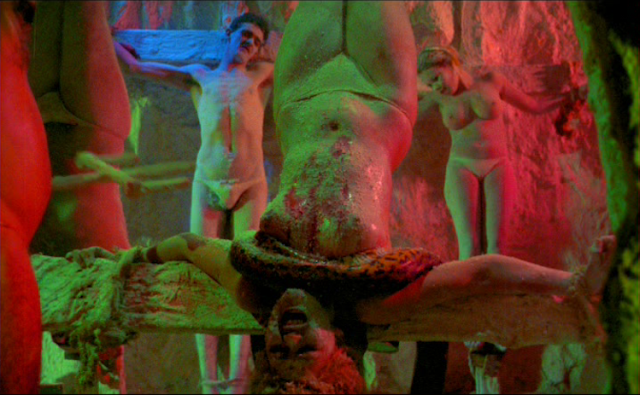 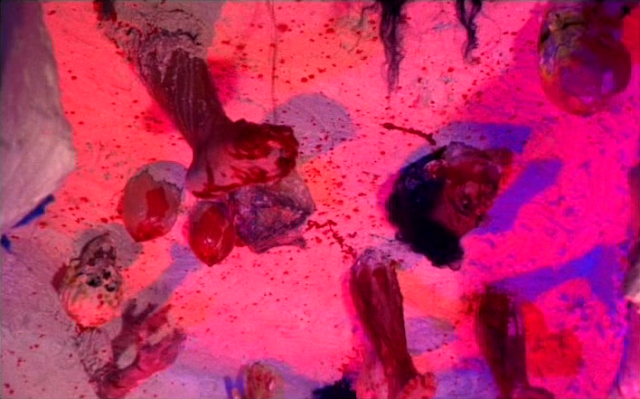 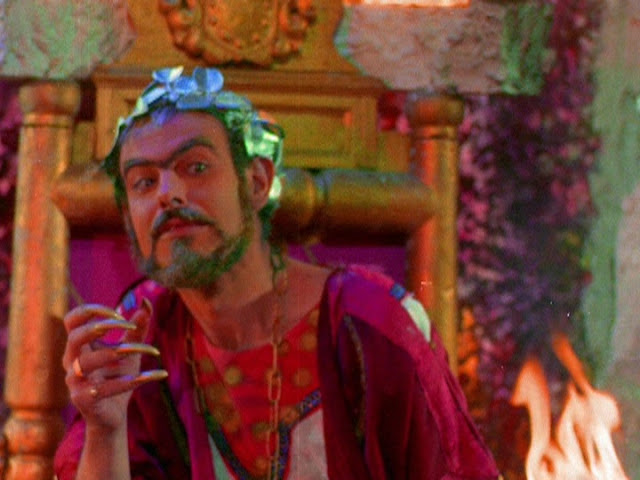 And confronted with a Satan who is a dead ringer for himself.

(Though nowhere near as extreme in its visual depiction of the horrors of the underworld, what we get here makes me wonder if Marins had seen and been influenced by Nobuo Nakagawa's 1960 JIGOKU.)

Ze's misery is short-lived as Laura announces she is pregnant (as "The Hallelujah Chorus" blares on the soundtrack). Overjoyed, Ze cannot wait to tell the people the good news — which just goes to show how oblivious and self-absorbed he is, as the entire village hates his guts. But Laura's exceedingly pissed-off  father has sprung the framed Trucador from jail and Trucador hires a pack of hardened professional thugs to take care of Zé do Caixão once and for all, and everyone in town clears the streets as the shit's about to go down. However, Zé do Caixão is determined to witness the advent of his son, so he is absolutely not going out without giving as good as he gets, or even worse. Events crescendo to a climax marked by a tough choice for Ze and righteous vengeance for the fed-up townsfolk, plus to say nothing of the spirit of the murdered woman who cursed him...

With THIS NIGHT I'LL POSSESS YOUR CORPSE, the overall production is a considerable refinement of what its predecessor brought to the table, with its performances conveyed in a naturalistic manner as opposed to the spooky Sunday school play histrionics of AT MIDNIGHT I'LL TAKE YOUR SOUL. Boasting a more rounded script and slicker production values than the DIY charms of the first outing, the film achieves far more than merely being offensive to the devout.   Whereas he was originally conceived to viscerally shock Brazil's native Catholic audience, Ze is no longer a caricature of evil rendered in the most broad and over-the-top of strokes. Marins displays a considerable depth of range while essaying what could easily have been a one-note character, and this film allows him to explore what motivates this fascinating figure of near-absolute immorality. We are treated to more of his philosophical ruminations upon life, death, and the nature of existence, all of which grants Zé do Caixão more genuine personality and twisted logic to his motivations than the vast majority of horror movie villains. We may not like the guy, but we sure as hell understand what he's striving for, no matter how warped the path he takes to reach his goals. It's a tour de force performance that held me invested throughout, and it's no wonder why Zé do Caixão has since become something of an iconic face on the international horror landscape.

Marins and Zé do Caixão returned some 40 years later in 2008's EMBODIMENT OF EVIL, and I am absolutely interested in tracking it down to review for next year's round of 31 DAYS OF HORROR. I just hope that Marins lost none of his signature touch during the intervening decades... 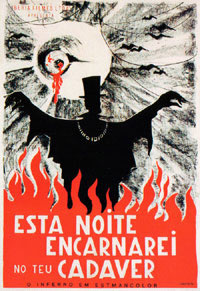