When you should have heeded the "NO TRESPASSING" sign.

Hiking vlogger Kyle McCleod (Andrew Leighty), armed with a backpack full of supplies and his GoPro video camera, parks his jeep in the woods and sets off on foot by himself to chronicle his journey along a mapped-out path to a picturesque summit, a trail noted as advised only for advanced-level hikers. He wanders around the silent forest, noting everything in his DIY travelogue, and eventually he encounters a closed area with a prominent "No Trespassing" sign, which poses a problem as his path leads him directly through the forbidden stretch. He crosses it anyway and in no time a sinister presence lurks in the near distance, avoiding Kyle's line of sight with superhuman speed, agility, and stealth. As Kyle forges ahead, he unearths the remains of a summer camp's entrance sign, and it reads "CAMP CRYSTAL LAKE." Kyle recognizes the name and recounts the events of FRIDAY THE 13th (1980) for the camera as he pokes around the abandoned remains of the former summer camp, now a legendary site of multiple murders. But is the derelict camp truly deserted?

Yes, Jason Voorhees still haunts the camp grounds and Kyle has violated his territory, much to his great regret. What ensues is Kyle attempting to survive as he, all by his lonesome, faces cinema's most implacable and prolific slasher.

NEVER HIKE ALONE is writer/director Vicente DiSanti's 53-minute fan film love letter to the FRIDAY THE 13th series (and its fans), and I think it says a hell of a lot that a fan film  is arguably better than any film in the actual franchise. A lot of thought went into this effort and it rewards the audience by treating its viewers with respect for their intelligence and also by eschewing nearly all of the annoying tropes that defined the series. With just one character to focus on and get to know, we become genuinely invested in Kyle as his well-intended trek goes horribly awry, and we root for him to survive, unlike the cannon fodder ciphers that pass as characters in the legit franchise. This is a FRIDAY THE 13th movie that proves a Jason outing doesn't have to suck, and the only missing element is the gratuitous nudity, since Jason and Kyle are the only characters (excluding two EMT's who arrive during the final act).

If you, like me, love the FRIDAY THE 13th series in spite of all good judgement, NEVER HIKE ALONE is a must-see in order to experience what can be done with a Jason movie when brains, solid filmmaking, and a simple, solid script are a part of the formula. FRIDAY THE 13th could be so much more than just a cheap, mindless charnel house and jiggle fest, and this humble not-for-profit fan effort points the way to what could and should be done with it. 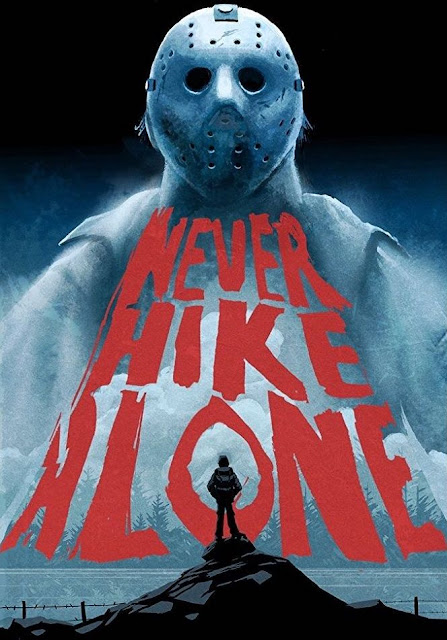