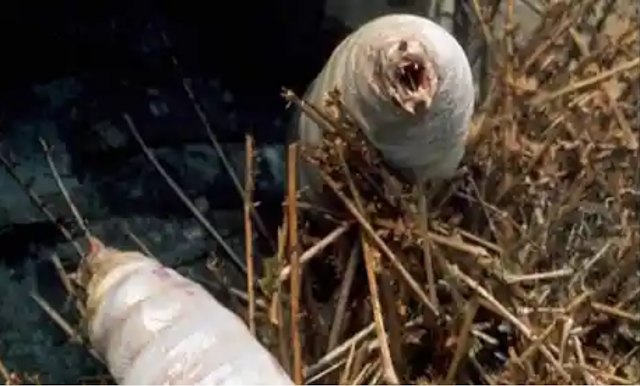 Aka "the one with the giant maggots."
Llanfairfach, South Wales, 1973: In an abandoned coal refinery,  the corpse of a miner is discovered,  suffused with an unknown pulsing green glow, and it's only the first of several. Derailing his plans to travel to the planet Metebelis Three (after landing there and immediately being attacked by assorted monsters), the Third Doctor (Jon Pertwee) follows his UNIT assistant Jo Grant (Katy Manning), and the Brigadier (Nicholas Courtney) to investigate the situation in Wales, encountering the opposing factions of a chemical corporation's shady bigwig and a protesting environmentalist group led by a young bio-technic research scientist who reminds Jo of the Doctor. (You can see where that element is going...) The investigation reveals chemical waste has spawned enormous maggot-like larvae but another threat lurks behind the scenes as the chemical corporation's officials find themselves manipulated by their hidden "boss," with sometimes-fatal results. 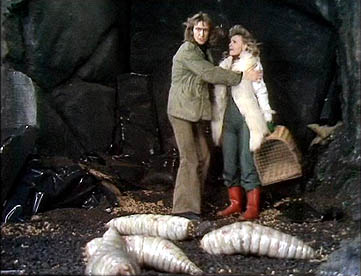 Truly a gag-inducing threat.
As matters escalate,  it is determined that the miners have died of an unknown virus, while the Doctor obtains one of the creatures' eggs that, much to the horror of all involved, hatches, swiftly maturing into an exponentially-enormous, vicious flying insect. Also, the big boss is unmasked, and the Doctor must race to simultaneously find a cure for the virus while sorting out a way to exterminate the maggots before the world is overrun with swarms of their airborne adult dragonfly-like version (which the Doctor perceives as "beautiful"). And let us not forget the menace of the increasingly-insane boss's agenda of world conquest... 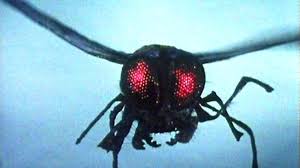 The adult form.
Reflecting the growing environmental concerns of its era, THE GREEN DEATH tells its story over six half-hour chapters and starts off as rather a slow burn.  One of the things I love about classic-era DOCTOR WHO is its willingness to patiently weave a solid narrative, as it allowed the story to take its time when establishing scenarios and allowing us to get to know the characters. That is certainly the case here, and the earthbound nature of this specific story grants it a more recognizable flavor to its horrors than something taking place in some far-off future location crammed with aliens. There's something quite Lovecraftian about the hissing, squirming super-maggots, and the natural human revulsion upon encountering such vermin of normal scale is sent into overdrive here. The sequence where the Doctor and Jo employ a mine cart as a makeshift canoe while paddling through a flooded mine shaft swarming with squirming mega-larvae firmly illustrates this point. 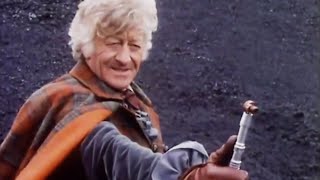 The Third Doctor (Jon Pertwee),  holding some stroppy creepy-crawlies s at bay.
Another element of this story is that after having portrayed the Doctor's companion and aide for about two years, Katy Manning opted to leave the show, so the always charming Jo Grant finds herself strongly attracted to the young scientist who makes her imagine a younger version of the Doctor. Until this point, Jo and the Doctor had something of a father-daughter relationship and it was clear that as their association flowered, Jo matured and, in essence, grew up, so it was only natural for her to want to spread her won wings and get out from her "father's" shadow. Over the course of the story the Doctor takes note of this, along with Jo's obvious interest in the scientist, so he resigns himself to the inevitable and lets her go. It's a poignant touch and the departure of of Jo is only mitigated by the introduction of Elizabeth Sladen as Sarah Jane Smith, arguably the Doctor's most celebrated companion, as of the next story.
THE GREEN DEATH is must-see classic DOCTOR WHO, though I honestly wonder if it would be so well-remembered today, nearly fifty years after originally airing, if not for the nauseating nature of the maggots. It's good, but admittedly a tad overlong in telling this story in six chapters. It could eaasily have been tightened up by making it as four installments.
Posted by Bunche (pop culture ronin) at Monday, October 26, 2020