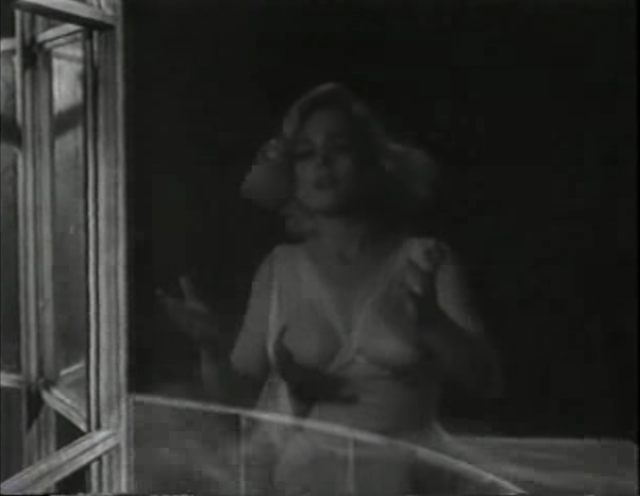 When one very wrong move comes back to bite you on the ass.

In a Cape Cod island community, local pianist Tom Stewart (1950's icon Richard Carlson, from IT CAME FROM OUTER SPACE and CREATURE FROM THE BLACK LAGOON)) anticipates marrying his sweet fiancee, Meg Hubbert (Lugene Sanders), but obsessive previous sexpot girlfriend Vi Mason (Juli Reding) arrives shortly before the wedding day,  threatening to destroy Tom's potential futre with Meg, even going as far as to threaten Tom with blackmail. (What Vi has on Tom with which to blackmail him is not made clear.) The two argue on the matter on the top level of a beachfront lighthouse and while they squabble the railing Vi is leaning on gives way, leaving her dangling precariously. Understandably terrified, Vi pleads with the nearby Tom to pull her up but, realizing that his predicament is about to solve itself, a nervous Tom allows Vi to plummet to her death, his inaction thus rendering him a murderer. 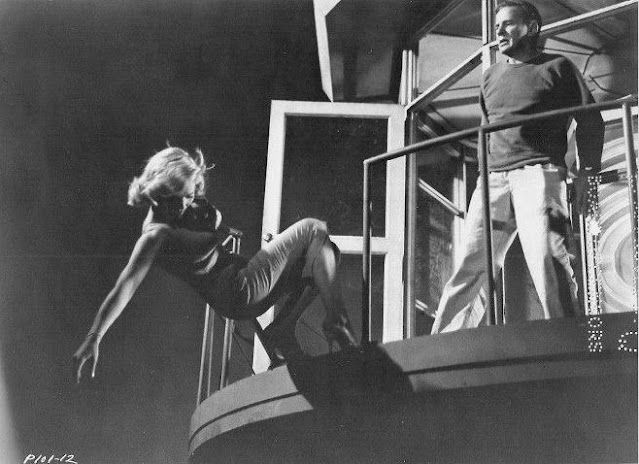 Taking the easy way out of conflict resolution.
The next day, Tom finds Vi's corpse floating off of the beach and when her hauls her body ashore, before his stunned eyes it turns to a mass of seaweed. From there, though trying to remain cool, Tom is haunted by visions of Vi's spectre, eerily showing up at inconvenient moments and howling "TOM STEWART KILLED ME!!!" with Tom being the only one who registers her presence. Things only escalate as the day of the wedding nears, and the question that remains front and center is that of Tom's sanity. Is he merely losing his mind or is the vengeful shade of Vi actually driving him to madness and possible further acts of homicide? 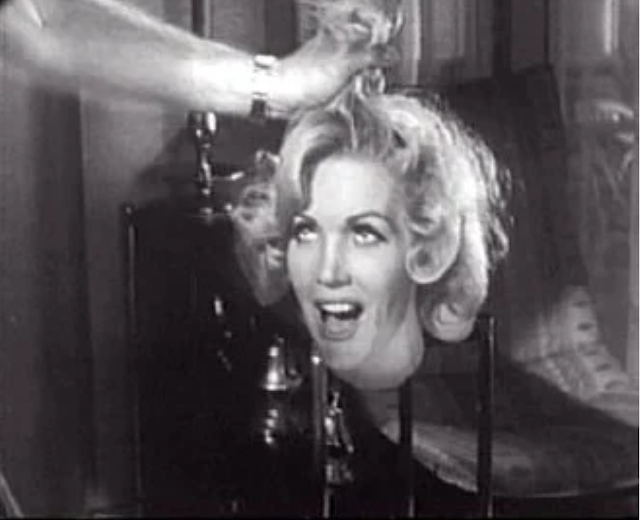 "TOM STEWART KILLED ME!!!"
TORMENTED is an effective little low-budget shocker that plays right into its era's wave of psychological horror, debuting the same year in which PEEPING TOM and PSYCHO were unleashed upon a not-ready-for-them public, and by comparison it's considerably milder meat. That said, it's still quite spooky, and it wastes no time in getting down to business. Throughout the narrative Tom's attempts at remaining cool after allowing Vi to meet her fate as a way of hiding his guilt are rattled by Vi's ghostly presence, and while there appears to be a good amount of physical evidence that the haunting is real, there's a strong possibility that the apparition is all in Tom's mind. As his torment is noticed by a couple of the ancillary characters, it's made clear that Tom will do anything to save his own sorry ass, including the murder of another innocent... 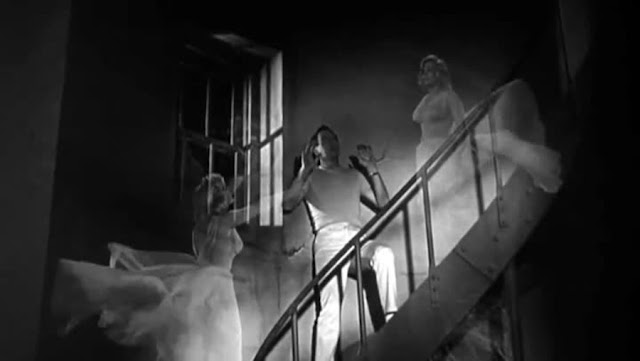 Hell hath no fury like a woman scorned (or in this case allowed to plummet to her death.)
TORMENTED's prolific director, Bert I. Gordon, brought us a number of classic sci-fi B-movies (and some classic stinkers) including KING DINOSAUR (1955), THE AMAZING COLOSSAL MAN (1957), BEGINNING OF THE END (1957), EARTH VS THE SPIDER (1958), ATTACK OF THE PUPPET PEOPLE (1958), THE MAGIC SWORD (1962), VILLAGE OF THE GIANTS (1965), THE FOOD OF THE GODS (1976), and EMPIRE OF THE ANTS (1977), several of which focused on giant monsters, thus earning him the nickname "Mr. B.I.G." Here he plays very much against time, offering a shocker that's considerably more mature in tone than most of his other efforts, concentrating on the unraveling of its protagonist's psyche instead of some gargantuan whatchamowhoozits wreaking havoc hither and yon. It's a surprisingly intimate tale, featuring a number of very memorable ghost sequence, and though the effects rendering them are rather dated, they are nonetheless eerily effective, their obvious unreality making them that much creepier.
Now best remembered due to its lampooning during the the fourth season (1992) of cult favorite MYSTERY SCIENCE THEATER 3000, TORMENTED is a good entry-level ghost story for youngsters that will likewise hold adults' interest due to the grownup motivations behind its plot. Humble but solid. 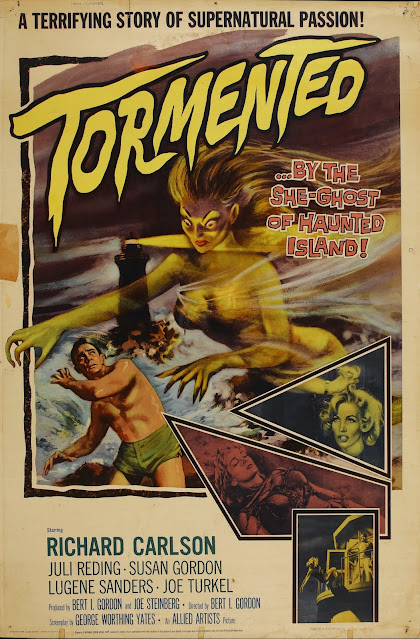