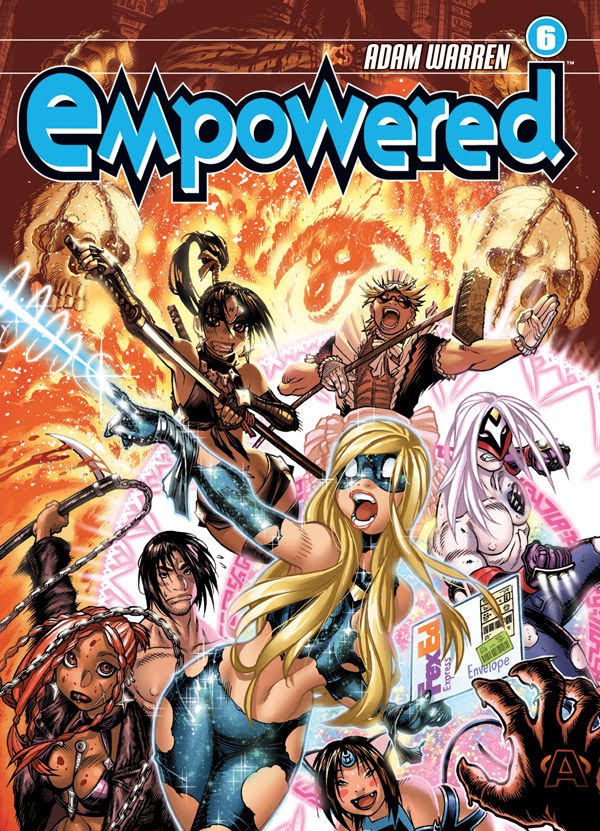 How much do I love Adam warren's EMPOWERED? So much that I shoved a cork up my flu-decimated bum and hit the comics shop to pick up the latest volume on its release day.

Picking up right where the previous volume left off, we find Emp understandably shaken after the double-awfulness of blazing, literally skull-fucking villain Willy Pete's attack on her Super Homeys teammates — that gruesomely kills off the majority of them — and the destruction of the team's satellite, which consequently led to the self-sacrifice of newfound friend Mindfuck, a powerful telepath who was Sistah Spooky's secret lesbian lover. Now, Sistah Spooky's a near-catatonic mess who's cast spells over herself that keep her in a false state of happiness while inside she's beyond torn up over her lover's death. As this volume progresses, we see Sistah Spooky's sanity sliding very close to the edge and falling straight off, and it is not pretty to watch...

Empowered, meanwhile, has to deal with yet more abuse and ostracism from what remains of the Super Homeys, some of whom believe her to be fully responsible for the decimation of the team. But it's not all bad because during her time stuck out of the way at team headquarters on monitor duty while the rest of the team is off indefinitely taking care of assorted loose ends, she bonds with cross-dressing badass Maidman, who proves to be a pretty good sounding board and unexpected source of good advice and analysis. Things get even more interesting when the Superdead arrive, a gaggle of re-animated fallen heroes who seek the Super Homeys' help in hiding out from the horrible Deathmonger, a vile being who revives and enslaves dead superheroes for his own sinister purposes. 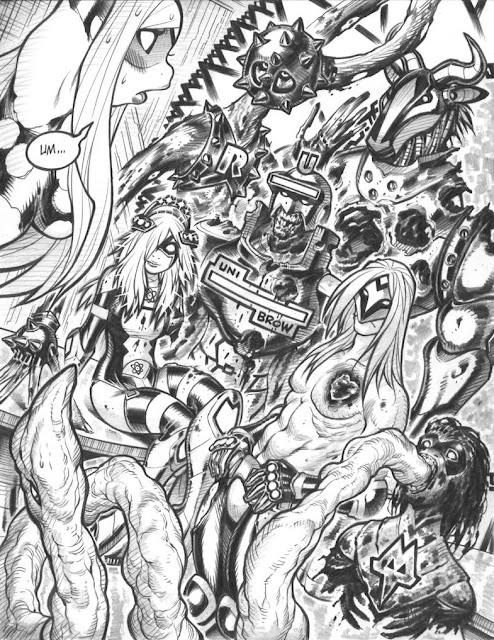 After initial tensions, the Superdead prove to be much kinder to Emp than her own douchey crew, and thus are connections made that will figure strongly in this volume's wild ending. The Superdead also hip Emp to some of the secrets of how some of her colleagues get their abilities and the price they pay for their gifts, and those revelations raise a number of questions that are certain to be addressed in future installments.

That's the real meat of what can be found in the volume's six stories, but there's other stuff going on, including:
EMPOWERED Vol. 6 features all the elements that made it my favorite comics series in at least a decade, but I have to say that this outing cannot help but pale in comparison to Vols. 4 and 5. Those books both served to greatly advance Emp from the pathetic laughing stock of the superhero community to a hero with great potential (even if only her friends realize it), especially during the literally apocalyptic rampage of Willy Pete, and the tragedy of finding a friend in Mindfuck only to lose her in so heart-wrenching a way add up to very strong narrative gold, providing a goofy super-burlesque with powerful emotional resonance. That's all a very hard act to follow, so Vol. 6 can be appreciated as an interim installment meant to provide some fun while also setting up material for future arcs. I'm totally into the Sistah Spooky subplot and can't wait to read more of that, but the one item in this volume that I didn't necessarily dig was the one with Emp taping the video for Ocelotina. It wasn't particularly amusing, and that's surprising because Ocelotina's usually very funny, but here she's barely a presence in her own oeuvre. But that one mildly-disappointing chapter is still worth sitting through and I will definitely be back for the next book.

Yeah, I gotta get this one. You made fans out of Bryan and me (have you seen our webcomic yet? http://www.arpeggiothecomic.com/), and now we're both wrapped as surely to this series as Emp is to her fickle "powered armor." You bastard...

That chapter that you dislike gains a very dark overtone after Emp's 'nightmare'. I felt the same way until I made the connection.